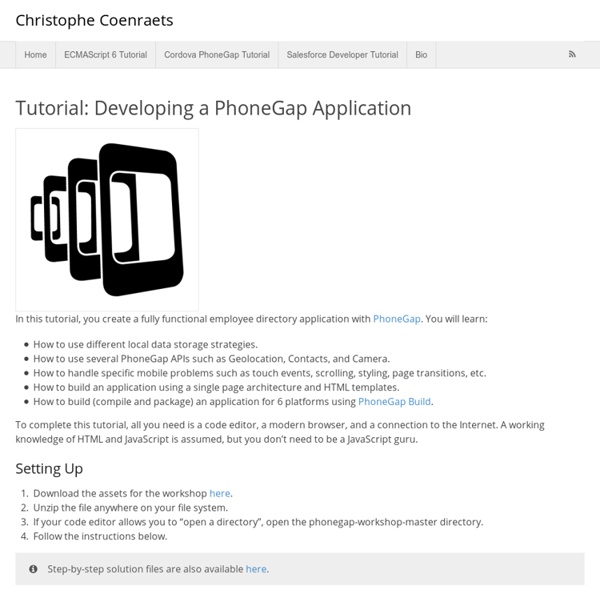 In this tutorial, you create a fully functional employee directory application with PhoneGap. You will learn: How to use different local data storage strategies.How to use several PhoneGap APIs such as Geolocation, Contacts, and Camera.How to handle specific mobile problems such as touch events, scrolling, styling, page transitions, etc.How to build an application using a single page architecture and HTML templates.How to build (compile and package) an application for 6 platforms using PhoneGap Build. To complete this tutorial, all you need is a code editor, a modern browser, and a connection to the Internet. A working knowledge of HTML and JavaScript is assumed, but you don’t need to be a JavaScript guru. Setting Up Download the assets for the workshop here.Unzip the file anywhere on your file system.If your code editor allows you to “open a directory”, open the phonegap-workshop-master directory. Step-by-step solution files are also available here. Part 1: Choosing a Local Storage Option

PhoneGap From Scratch: Introduction Want to learn how to use PhoneGap, but don't know where to get started? Join us as we put together "Sculder", not only a tribute to an excellent science fiction TV series, but a fully-fledged native mobile application for the believer in you! In this series, we will build a mobile application using some of the features in PhoneGap. We will go from installation of the SDK to deployment into the app stores of the two major platforms: iOS and Android. Concepts covered in this series will include accessing the device camera, local storage, and geolocation. In this first part, we will take a quick look at what PhoneGap actually is and what you can use it for, and then look at the installation of the PhoneGap framework and the SDKs that we require for testing on OS X, Windows, and Linux environments. What is PhoneGap? By now you probably have a good idea of what PhoneGap is and you've probably even used it, but, if not, here's a brief overview. At the time of publication (e.g. Concluding Remarks

iScroll 5 iScroll 5 is a faster more mature code than the previous versions. It doesn’t add many new features but it fixes bugs and most notably runs smoother on old devices. Please note that previous releases are not maintained nor supported, so go get the new version! iScroll finally got its very own domain. iScroll is a high performance, small footprint, dependency free, multi-platform javascript scroller. It works on desktop, mobile and smart TV. iScroll does not just scroll. Even on platforms where native scrolling is good enough, iScroll adds features that wouldn’t be possible otherwise. Granular control over the scroll position, even during momentum. The future We’ve gone so far… Can you believe all this started in 2008. The script has become much more than a simple scroller, but the original (current) structure is too tight to handle all the things I wish the iScroll would be capable of. Support development

Storage When web developers think of storing anything about the user, they immediately think of uploading to the server. HTML5 changes that, as there are now several technologies allowing the app to save data on the client device. It might also be sync'd back to the server, or it might only ever stay on the client: that's down to you, the developer. There are several reasons to use client-side storage. Using the PhoneGap Build Panel in Dreamweaver CS6 to Build Native Applications for Android and iOS Devices | CS6 & Creative Cloud Feature Tour for Web Community Translation Episode available in 1 languages Available Translations: Join the Community Translation Project Thanks for your interest in translating this episode! Please Confirm Your Interest Thanks for your interest in adding translations to this episode! An error occurred while processing your request. Another translator has already started to translate this episode. Thanks for Participating! This episode has been assigned to you and you can expect an e-mail shortly containing all the information you need to get started. About This Episode Adobe Evangelist Greg Rewis shows how to build native applications for Android and iOS devices using Dreamweaver CS6.

Implementing a Fixed Position iOS Web Application - Mobile Ryan FioravantiDecember 2010 Background Here at Google, we're constantly pushing the boundaries of what's possible in a mobile web application. Technologies like HTML5 allow us to blur the distinction between web apps and native apps on mobile devices. As part of that effort we've developed a fixed position version of our mobile Gmail application. The mechanisms being used here are similar to the ones used to implement our two pane UI for Gmail on the iPad. In a desktop web application, this would be a simple feat because desktop browsers support position: fixed. In this article, we will show you the building blocks required to incorporate fixed position into your own mobile web applications. Creating a suitable layout Animating the scrollable content on drag using transforms Animating the scrollable content with momentum using transitions Halting a scrolling element on touch, mid-transitions Creating a Suitable Layout Animating the scrollable content This function gives us momentum!

fixed position iOS Pull-to-refresh in mobile Safari with native Scrolling - Damien Antipa The iOS6 developer kit for native apps is out there for a while and Apple finally added a out of the box pull-to-refresh control called UIRefreshControl. However this feature is nothing new and used by plenty of apps in different implementations for years now. There is even a implementation for web applications included into iScroll which allows to simply make a block element scrollable and add the pull-to-refresh feature. I strongly recommend the use of this attribute instead of Javascript scrolling! The concept to achieve that is pretty simple. The outer div (red border) is scrollable and gets the -webkit-overflow-scrolling: touch; and attribute overflow-y: auto;. The background color between the pull-to-refresh panel and the content may be different and can be applied to the nested divs. Now you should already be able to see the pull-to-refresh panel behind the content while scrolling with the rubber band.