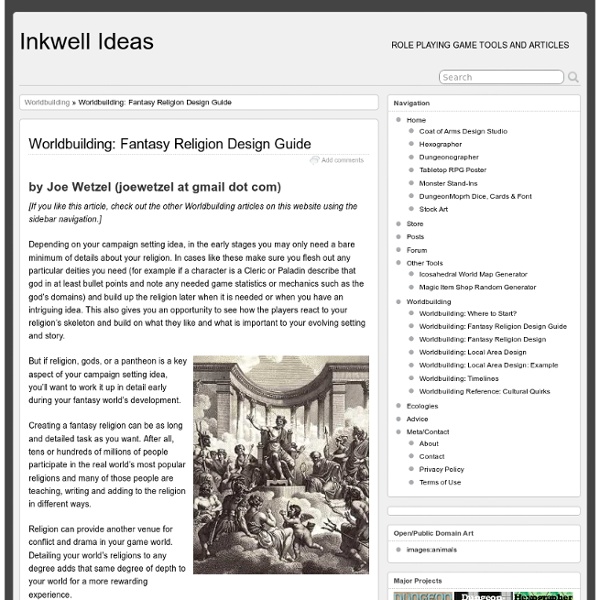 by Joe Wetzel (joewetzel at gmail dot com) [If you like this article, check out the other Worldbuilding articles on this website using the sidebar navigation.] Depending on your campaign setting idea, in the early stages you may only need a bare minimum of details about your religion. In cases like these make sure you flesh out any particular deities you need (for example if a character is a Cleric or Paladin describe that god in at least bullet points and note any needed game statistics or mechanics such as the god’s domains) and build up the religion later when it is needed or when you have an intriguing idea. This also gives you an opportunity to see how the players react to your religion’s skeleton and build on what they like and what is important to your evolving setting and story. But if religion, gods, or a pantheon is a key aspect of your campaign setting idea, you’ll want to work it up in detail early during your fantasy world’s development. Multiple Religions? Nature of the Gods Related:  religion et mythologie

religion in fantasy novels | helluo librorum Since no one burned my house down after the Tolkien post, I’m going out on a limb here and talk to you about using religion in your fantasy novels. Generally speaking, when building worlds in fantasy novels, the religions of your world will be a reflection of the religions here on good old planet earth. So I’m going to offer a few suggestions – take them or leave them: Know thy religion. Understand the core beliefs. Avoid stereotypes. Religions don’t kill. Treat all religions with respect. Don’t be malicious. World building is a difficult process; as a fantasy writer you are creating a whole social order, and you want it to be believable. A few articles to see: If you’re looking for a checklist of questions to ask when world building, go to the SFWA blog where Fantasy Worldbuilding Questions by Patricia C. Joe Wetzel at Inkwell Ideas has a great article with Worldbuilding: Fantasy Religion Design Guide, and a subsequent post, Worldbuilding: Fantasy Religion Design Example. Like this:

Greek Gods Family Tree / Genealogy | ludios.org Doing homework? Your teacher has already seen this. See Theoi; it has properly-sourced information. Known errors: Generally inconsistent sourcing. This chart was made in 2004, and Wikipedia was treated as a primary source. Worldbuilding: Fantasy Religion Design Example Working through the Fantasy Religion Design Guide, our first step is to decide on the scope of religions on the world we are creating. For the purposes of this exercise, we’ll have two different religions for two different cultures, although their areas of influence may overlap as in the real world. The world could easily have more religions, but following rule #1 of Dungeoncraft (never force yourself to create more than you need) and because a clash of religions isn’t part of the early campaign, two religions is actually more than enough for now. For the first religion, we’ll follow up on one of the examples (using an object–a chess board–to show the relationships between the gods of a pantheon) mentioned in the Fantasy Religion Design Guide. If the two religions’ areas of influence overlap there would be “contact” between them. Chess Example Religion This example religion uses a chess board to provide its structure and relationships. Below is a short description for each god:

voodoo resources Greek Mythology: FAMILY TREE OF THE GREEK GODS The complete family tree of the gods is displayed over eight indexed charts. The basic structure follows Hesiod's Theogony, but that author's genealogies have been expanded with a plethora of additional gods, spirits and creatures sourced from other classical sources. Where there is disagreement amongst ancient writers as to the genealogy of a certain character, the oldest and/or most popular source has been selected for the chart. An additional family tree depicts the divine genealogy given in Hesiod's Theogony. Click on any name in the chart to view the full page entry for that individual. INDEX Index of names in the family tree KEY Overview of and key to reading the charts CHART 0 The Main Gods A short tree containing just the main gods of the pantheon. CHART 1 The Cosmogony of the Gods The primordial gods or protogenoi. CHART 2 The Children of Night The spirit descendants of Khaos (Air), Nyx (Night) and Eris (Strife). CHART 4 The Children of Sea, Storm and Earth.

Patricia C. Wrede's Worldbuilder Questions: Index Index About This Page This page is not Patricia Wrede's web site. This page is not for young fans of Patricia C. This page is about creating fantasy worlds. This page (actually the many pages in this section) are derived of a number of postings Ms. Originally the questions did not have the sort-of-alphabetic arrangement I have given them here. I put the questions on the web many years ago and obtained Ms. The implications of all of that are: these pages have no connection with any software product, any building-block toys, game creation system, or any other product which uses the word "Worldbuilder" as a trademark. Index of Patricia C.

Maps Workshop — Developing the Fictional World through Mapping Most of the books I’ve written have started with a map. Not with an idea, or a character, or a theme. With a hand-drawn map, doodled out first while I was sitting and keeping someone else company, or while I was on break, or when I couldn’t think of what to write and had no ideas to speak of and knew that if I drew a map something would come to me. Some of the maps were fairly artistic from the start. Some began on napkins or the backs of throw-away paper, and only became things of any artistic merit after they’d served their initial purpose of handing me an idea for a novel. Now I know this is a weird little quirk of mine, and I can’t guarantee you that if you’ll just draw a map, it will give you a novel that will sell. I have favorite tools for mapping. This first map is going to be your continent. Before we get started, I want to be VERY clear about one issue that I know some of you are already sweating over. Okay. Get out your graph paper. It’s time to make use of your mistakes. Now…