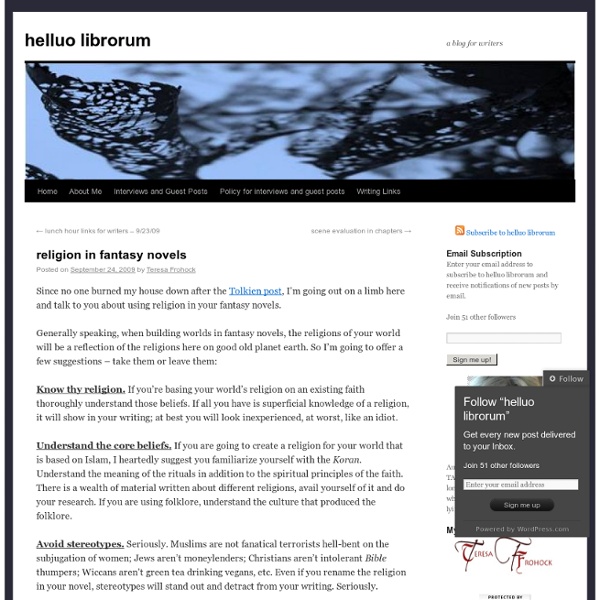 Since no one burned my house down after the Tolkien post, I’m going out on a limb here and talk to you about using religion in your fantasy novels. Generally speaking, when building worlds in fantasy novels, the religions of your world will be a reflection of the religions here on good old planet earth. So I’m going to offer a few suggestions – take them or leave them: Know thy religion. If you’re basing your world’s religion on an existing faith thoroughly understand those beliefs. If all you have is superficial knowledge of a religion, it will show in your writing; at best you will look inexperienced, at worst, like an idiot. Understand the core beliefs. Avoid stereotypes. Religions don’t kill. Treat all religions with respect. Don’t be malicious. World building is a difficult process; as a fantasy writer you are creating a whole social order, and you want it to be believable. A few articles to see: Like this: Like Loading... Please visit my web site at: www.teresafrohock.com

Maps Workshop — Developing the Fictional World through Mapping Most of the books I’ve written have started with a map. Not with an idea, or a character, or a theme. With a hand-drawn map, doodled out first while I was sitting and keeping someone else company, or while I was on break, or when I couldn’t think of what to write and had no ideas to speak of and knew that if I drew a map something would come to me. Some of the maps were fairly artistic from the start. Some began on napkins or the backs of throw-away paper, and only became things of any artistic merit after they’d served their initial purpose of handing me an idea for a novel.

Worldbuilding: Fantasy Religion Design Guide by Joe Wetzel (joewetzel at gmail dot com) [If you like this article, check out the other Worldbuilding articles on this website using the sidebar navigation.] Depending on your campaign setting idea, in the early stages you may only need a bare minimum of details about your religion. In cases like these make sure you flesh out any particular deities you need (for example if a character is a Cleric or Paladin describe that god in at least bullet points and note any needed game statistics or mechanics such as the god’s domains) and build up the religion later when it is needed or when you have an intriguing idea.

Political Writing Say you are a young person beginning to write about politics and policy. You probably have some idea of what you believe, but have you thought about how you believe it? That is, have you thought about where you will sit on the continuum that stretches from writers who are engaged to those who are detached? Writers who are at the classic engaged position believe that social change is usually initiated by political parties. To have the most influence, the engaged writer wants to channel his efforts through a party.

Hebrew Goddess; Asherah, the Shekinah, consort of Yahweh The Hebrew Goddess Painting by Jonathon Earl Bowser Asherah, known as the "Lady of the Sea" Asherah, the Shekinah, consort and beloved of Yahweh. Template for Creating and Building a New Fantasy Race for your Fictional World In fantasy world building and writing, the term "race" is loosely used to describe a sentient or sapient life form with a similar degree of intelligence and awareness as that of a human. Generally a new race will have shared traits and will be aware of its self and its environment. The way your race interacts with its environment will influence the local ecosystems and they will use the world's resources to better their standard of living and interact together in a social capacity. Creating an entirely new fantasy race can be a daunting task for a fantasy world builder or writer. Having a good design template to begin drafting the various characteristics of your race is important for shaping a well rounded creation. Even if your race is not completely unique to your world, you can use this template to record the characteristics for all your races on your fantasy world.

Medb hErenn — The Faerie Lore of Ireland aeries are not unique to Ireland, however, the Irish did not develop a ghost tradition until the coming of the Anglo-Normans in 1171, or a demonology until the imposition of continental style Roman Catholicism circa 1000 C.E. Until then, their supernatural lore centered on Faeries. The term Faerie is derived from "Fé erie", meaning the enchantment of the Fées, while Fé is derived from Fay, which is itself derived from Fatae, or the Fates. The term originally applied to supernatural women who directed the lives of men and attended births.

Mystery Writing Lessons 3. Create compelling characters Most of all the characters are important. You want them to be "rather more than stereotypes. Huginn's Heathen Hof Original-Ósnjallr maðrhyggsk munu ey lifaef hann við víg varasken elli gefrhonum engi friðþótt honum geirar gefi Translation-The cowardly manthinks he will live foreverif he just avoids conflictbut old age gives him no peacethough spears have spared him-Hávamál: Stanza 16 Much like the preceding stanza (15), this verse gives us a glimpse into ancient Germanic philosophy.

World-building questions World-building is common in fantasy and science-fiction. It can create amazingly rich backgrounds for stories, but it can also cause problems of its own. Fortunately, it’s one of many topics we’ve addressed at length over on Writers.stackexchange.com. Writers is a no-nonsense writers’ enthusiast Q&A built by users. Instead of wading through a lot of random discussion to get to the good stuff, the best answers are always voted to the top.