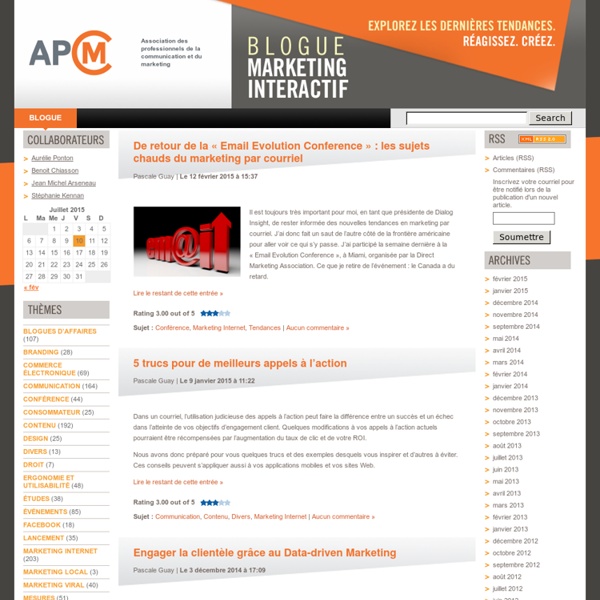 All About Marketing Guidelines for developing, marketing and evaluating nonprofit programs are included in the book Field Guide to Nonprofit Program Design, Marketing and Evaluation . The vast majority of the guidelines apply to for-profit marketing as well. Sections of This Topic Include Gourmet Ads CPM Network USA, UK, Canada and Australia - F Summer Campaign Ideas Grocery Buyers will soon be trading in Snow Shovels for BBQ SpatulasEveryone is turning their focus to the warmer days ahead...and the advertising opportunities to get your brand in front of grocery buyers who will soon be trading in snow shovels for BBQ spatulas, so here a 8 ideas for your Summer...Continue Reading>> Easter Advertising Easter Advertising isn't just about Marketing Chocolate Easter Eggs!

Future IPhone Will Support China Mobile's 4G Network ~ Mobile News Future versions of Apple's iPhone will support China Mobile's fourth generation (4G) network, China's largest mobile carrier said, a sign that it will eventually offer the iconic device to its 600 million customers. China Mobile's chairman Wang Jianzhou reported the development on Thursday, according to a company spokeswoman. Both Apple and the carrier have reached a consensus on the development of Long-Term Evolution (LTE), a 4G technology that can allow mobile phones to exchange data at much faster rates. When Apple releases iPhones built for 4G networks, the devices will also support China Mobile's version of this technology known as LTE TDD (Time-Division Duplex), Wang said.

Black Tie Beach « Improv Everywhere - Flock (View it larger on YouTube) Produced by Charlie Todd and Matt Adams / music by Tyler Walker For our latest mission we had several hundred agents spend a day at Coney Island / Brighton Beach wearing black tie attire. We covered a mile-long stretch of beach with a diverse group of people of all ages (from babies to sixty-somethings) laying out, playing games, and swimming in the ocean, all in formal wear. Agents were instructed to find cheap tuxedos and ball gowns at thrift stores for the occasion. Shot by: Matt Adams, Jason Eppink, Keith Haskel, Erik Martin, Chloe Smolkin, Charlie Todd Photography: Brian Fountain, Ari Scott, Katie Sokoler (full flickr sets for each photographer at the bottom of this post.) pre-mission briefing

iPad 2 Camera Has Only 23 Active Daily Users ~ Mobile News According to Flickr’s camera usage statistics, the iPad 2′s camera is used by very few people — only 23 active daily users. And so far, 12,811 photos have been taken and uploaded to Flickr with the device.By comparison, the iPhone 4 has 4,402 daily active users; more than a million photos have been taken with the device. We don’t have exact numbers of iPad 2 sales, but the tablet has been on the market since March 11. According to Apple, strong sales have resulted in a record-setting quarter, with analysts estimating that about half a million devices sold in during the iPad 2′s first weekend on the market. The iPad 2′s camera has been one of the most criticized aspects of the device: At 0.7 megapixels, it’s only good for the most basic tasks.

3 Pressing Questions Facing the Future of Social Media Soren Gordhamer is the organizer of the Wisdom 2.0 Conference, which brings together staff from Google, Facebook, Twitter and Zynga along with Zen teachers and others to explore living with awareness and wisdom in our modern age. He is SorenG on Twitter. The conversation about social media in our society is shifting significantly. We're no longer asking questions like, “Will people use social media?” Google Parisian Love Talk about ads that make you emotional! This premiered two years ago during the Superbowl. It’s one of my favorite commercials ever. I’m pretty sure that any one who watched this had an ‘awwww’ moment when they started to realize the intentions for all of searches. This commercial does a great job of framing Google as a brand that’s able to be emotional. For example, when I think of Google I think of it as a resource for the answers to all my technical questions.

Dare to be Different: Brands & Consideration Sets Quick, think of at least three brands of laundry detergent! I’m pretty sure that Tide, Gain, or Downy was on your list. This is because of some miraculous thing we call a variety of brands. So many brands exist in order for us to have choices when we go to the grocery store. YuckAdList: Mercedes Left and Right Brain First off, I just want to say that I had to look at this ad for a while before figuring out if it was worthy of Ad of the Day or YuckAdList. It took me a while but I think I am quite sure that it is in the right category. I give this ad mad props for the design and illustration, but I think it gets a peasant wave from me because although it is beautiful, I don’t get how it connects to the brand. Are they trying to say that Mercedes is a combination of the left and right brain? I am utterly confused here. The link to the product is also extremely small in the right corner and my eyes do not follow to that spot in the massive blast of colors for the right brain.