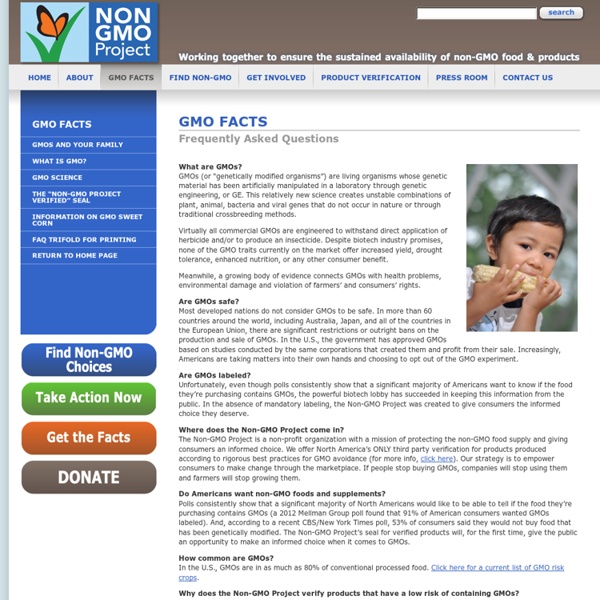 What are GMOs? GMOs (or “genetically modified organisms”) are living organisms whose genetic material has been artificially manipulated in a laboratory through genetic engineering, or GE. This relatively new science creates unstable combinations of plant, animal, bacteria and viral genes that do not occur in nature or through traditional crossbreeding methods. Virtually all commercial GMOs are engineered to withstand direct application of herbicide and/or to produce an insecticide. Despite biotech industry promises, none of the GMO traits currently on the market offer increased yield, drought tolerance, enhanced nutrition, or any other consumer benefit. Meanwhile, a growing body of evidence connects GMOs with health problems, environmental damage and violation of farmers’ and consumers’ rights. Are GMOs safe? Are GMOs labeled? Where does the Non-GMO Project come in? Do Americans want non-GMO foods and supplements? How common are GMOs? What are the impacts of GMOs on the environment?

Teen activist Rachel Parent set to debate health minister on GMO labelling An Ontario teenager who held her own in a debate with CBC’s Kevin O’Leary about GMO labelling will have her voice heard in Ottawa. Rachel Parent, 15, will meet with Health Minister Rona Ambrose later this month to discuss her goal of having all genetically modified foods clearly identified. "It’s super exciting," Parent told Yahoo Canada News in an interview last week. "I want to talk to her about GMOs not being proven safe and that we need long-term, independent studies to determine their safety. "And finally, I’d really like to talk to her about the fact that until it’s proven safe, we should at least label them so we have the freedom to choose [what we eat]." Genetically modified organisms are crops or animals that have had their genes altered with DNA from different living species, so that they become resistant to disease or tolerant of pesticides. According to a U.S. Parent and other opponents argue that the technology hasn't been proven to be safe and therefore should be labelled.

GMO's IN TNE NEWS The Cornucopia Institute March 30th, 2011 Lawsuit Filed To Protect Themselves from Unfair Patent Enforcement on Genetically Modified Seed Action Would Prohibit Biotechnology Giant from Suing Organic Farmers and Seed Growers If Innocently Contaminated by Roundup Ready Genes NEW York: On behalf of 60 family farmers, seed businesses and organic agricultural organizations, the Public Patent Foundation (PUBPAT) filed suit today against Monsanto Company challenging the chemical giant’s patents on genetically modified seed. Monsanto has sued farmers in the United States and Canada, in the past, when there are patented genetic material has inadvertently contaminated their crops. A copy of the lawsuit can be found at: ( The case, Organic Seed Growers & Trade Association, et al. v. Once released into the environment, genetically modified seed can contaminate and destroy organic seed for the same crop. Dr. David L.

Meet Rachel Parent — the teen fighting for GMO labelling in Canada Watch: Rachel Parent is a 15-year-old activist. Her goal: mandatory labelling in Canada of all genetically modified organisms, or GMOs that are found as ingredients in food. Allison Vuchnich has part one of a four-part series on GMOs and labelling. UPDATE: Rachel Parent has met with Health Minister Rona Ambrose. Standing in the grocery store aisle surrounded by processed and packaged food, examining ingredients and scanning labels: this is shopping with Rachel Parent, and it is a thorough process. “About 70 per cent of the (processed) food on all our grocery store shelves is genetically modified or has GMO ingredients in it,” Parent told Global News as she reached for a container of relish and examined its ingredient list. So for instance, glucose fructose is a derivative from corn and it’s high-fructose corn syrup basically, so there really is a 90 per cent chance that it is GMO,” she said. “Of course, I would never know unless it was labelled.” Parent is a 15-year-old activist.

GMO and Your Health Why should you care about GMOs? Do you eat food? Then you definitely have to watch this video! Jeffrey Smith lays it all out on what doctors, veterinarians, and farmers have discovered about what may be the single greatest health risk for all living beings to all future generations. Independent, scientific evidence that contradicts what Monsanto and the FDA are saying: 40% increase of IBS (Irritable Bowel Syndrome) since the introduction of GMOs in our foodGenetic modification causes massive collateral damage to plant cellsGlyphosate (Round UP weedkiller) increases disease susceptibility in plantsGlyphosate causes nutrient deficiency in soil, plants, and therefore our foodBt toxin from GM crops found in human tissue and may cause gene transferUp to 90 percent of several U.S.grown crops are grown with genetically engineered seed. As of 2009, the overall RoundUP brand line of products including the GM seeds represented about 50% of Monsanto’s business. We have the Right To Know.

» Consumer rejection kills GM enviropig as farmers feared pork market collapse Alex Jones Market pressure drove researchers to abandon biotech pig ‘contending’ to be first approved GM meat on consumer plates. Aaron Dykes Infowars.com April 5, 2012 In a victory against biotech, Canada’s Ontario Pork has announced its decision to cut funding and stop research for the enviropig, genetically-engineered to produce less phosphorous in manure, in effort to reduce the environmental impact of raising pigs. “[Enviro-pig] certainly does not have the public’s support,” Lucy Sharatt, Coordinator of the Canadian Biotechnology Action Network (CBAN) said, later adding that the Canadians widely reject GM products. “It threatens pork markets. Instead, the GM specimen will be preserved via “genetic hibernation,” deep freezing the semen for ‘future’ market climates less hostile to GMO foods. As the following press conference makes clear, it was the public who weighed in and readily rejected the GM pig, and consumer demand was the obvious token: Dr. Heather Callaghan writes: Print this page. BUSTED!

Complete List of Non-GMO Food Brands Genetically modified foods have been linked to a number of health and environmental dangers over the years. Frankly, many people simply don’t trust them and this is for good reason. Although science offers data on both sides of the equation, GMOs have not been around long enough to call them safe with long term use. Given the health problems that are already showing up, we should be kicking the practice of consuming GMOs. Corporations are pushing GMOs more aggressively than ever; fortunately this is only a serious problem in North America as most other places in the world have banned the production and sale of GMO products all together. When we make the choice to not consume these restructured foods, we are not only making more health-conscious choices for our own wellness, but we are also choosing to support the companies that are doing the work to ultimately end GMO food production once and for all. “The difference is pretty large. Learn more about GMOs here. Sources:

Biotech front group's smear campaign against Doctor Oz spectacularly backfires as he publicly outs the felons and frauds behind it (NaturalNews) The contrived attacks on Doctor Oz backfired in spectacular fashion today as he took to the air to expose the convicted felons, frauds and hucksters -- all doctors operating as corporate front men -- who tried to silence him. To confront the vicious attempts at defamation and slander against him, Doctor Oz invited celebrated integrative medicine expert Dr. Joel Fuhrman to appear on his show. (For background, Dr. Fuhrman earns a big thumbs up from Natural News for his passionate advocacy of holistic healing modalities and disease prevention expertise.) Natural News was the first news organization to expose the sleazy biotech industry front group behind the attacks on Oz. A sneak preview of the exchange between Dr. In this interview, Dr. Dr. Dr. Both Doctor Oz and Dr. Speaking of sleaze, read about the American Council on Science and Health, a biotech industry front group led by a doctor with a felony criminal record of fraud against the U.S. government. Dr. Dr. Dr. Dr. Dr.

GMO Contamination of the Food Chain. Devastating Health Impacts. EU Food Safety Regulators Turn “A Blind Eye” “Corporations as the dominant institution shaped by capitalist patriarchy thrive on eco-apartheid. They thrive on the Cartesian legacy of dualism which puts nature against humans. It defines nature as female and passively subjugated. Corporatocentrism is thus also androcentric – a patriarchal construction. The false universalism of man as conqueror and owner of the Earth has led to the technological hubris of geo-engineering, genetic engineering, and nuclear energy. The protection of biodiversity involves maintaining the ability of organisms to develop under their evolved dispositions and naturally established restrictions and to participate in further evolutionary processes. We seek to protect organisms and ecosystems from persistent chemical substances. GMO maize, rice, cotton and oilseed rape have uncontrollably spread in regions and countries such as the US and Canada, Central America, Japan, China, Australia and Europe. Christoph Then: It wouldn’t be the first time. Notes

The Great GMO Corn Experiment – Food Science Institute Some people who have less information about biotechnology have asserted that animals won’t touch or eat GMO corn, and only non genetically modified corn. This is pretty unlikely on the face of it, since farm animals have been feed GM corn for nearly 20 years with zero problems. In addition, GM corn is identical in smell, taste and nutrition. However, some people have published such claims here, here and here. We carried out an early experiment in 2013 to illustrate that this is not the case, finding the squirrels and chipmunks had no such preferences. The non-profit organization Biofortified has undertaken a very large controlled Citizen Science experiment of the same kind, but using corn isolines. Then volunteers were recruited on line to order the corn kits and see how wild animals like them. This is a fun experiment for you to try, too. Like this: Like Loading...