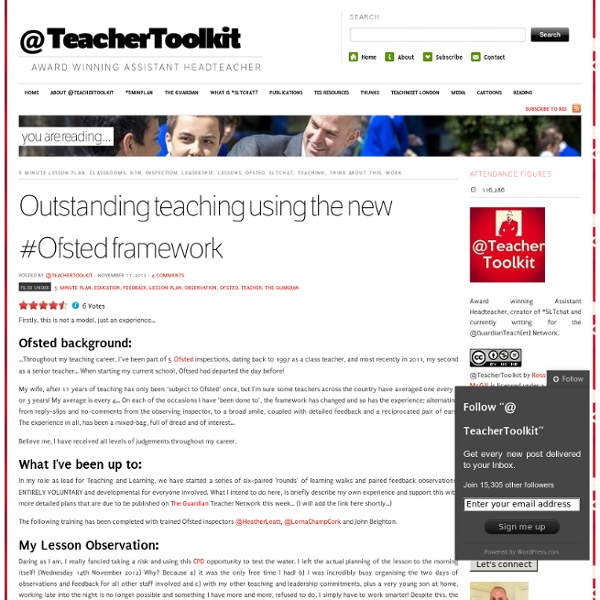 Firstly, this is not a model, just an experience… Ofsted background: …Throughout my teaching career, I’ve been part of 5 Ofsted inspections, dating back to 1997 as a class teacher, and most recently in 2011, my second as a senior teacher… When starting my current school, Oftsed had departed the day before! My wife, after 11 years of teaching has only been ‘subject to Ofsted’ once, but I’m sure some teachers across the country have averaged one every 2 or 3 years! Believe me, I have received all levels of judgements throughout my career. What I’ve been up to: In my role as lead for Teaching and Learning, we have started a series of six-paired ’rounds’ of learning walks and paired feedback observations. The following training has been completed with trained Ofsted inspectors @HeatherLeatt, @LornaChampCork and John Beighton. My Lesson Observation: Daring as I am, I really fancied taking a risk and using this CPD opportunity to test the water. Here is a picture of my actual lesson plan: “Right!

Little Story Maker App: Listening, Reading, Customizing, Personalizing  I am completely impressed with the “Little Story Maker” App by Grasshopper Apps. (Thank you to Karen Lirenman, a first Grade teacher from Surrey, BC, Canada) I happen to visit my little niece in Canada this past week. In the app, we added a story. Then added the title of the story, added a cover image from the photo album and chose the template with the biggest image layout (I hope that a future update will bring more template layouts with multiple images as choices.) We kept adding pages with images and text for each page. The app allows you to have the book read to you, read it by yourself of set it to AutoPlay, which is really nothing new and most children’s book apps have the same feature. Where the customization comes in, is the fact, that you not only can enter you own text, then record your own voice (in any language of course) AND have individual words highlighted as it is being read! You an also tap individual words to hear them individually pronounced in your recorded voice.

Leadership and wisdom: Why us and them? I'm in serious mood today. None of the usual frivolities. OK, you might get a cartoon at the end, but until then, I'm talking business... I don't know about you, but I often have decent ideas which I'm developing at some bizarrely insane time of the day, when suddenly I will read someone else's blog which just, mortifyingly, turns out to be the perfect expression of what I've been struggling to articulate for so long. Today was such a day, when I read Kev Bartle's blog on line management, and the need to build a relationship of trust between manager and line managee (he made that word up by the way, not me). This line caught my eye: "And I trust that they (the people he line manages) are in this job for all the right reasons, as I hope they trust that I am in the job of senior leadership for all the right reasons." However, this line highlighted a problem I have perceived, which has puzzled me throughout my career as a teacher and middle leader: The divide between SLT and "staff".

how-we-met-julia-donaldson--axel-scheffler-8444842 Scheffler has illustrated 15 books for children's author Julia Donaldson over the course of 20 years of collaboration, including 'The Snail and the Whale' and the award-winning 'The Gruffalo'. He lives in south London with his partner. I'd only done one or two picture books when I was approached by a publisher to illustrate Julia's first story [A Squash and a Squeeze], in 1992. With that first book, I remember drawing the main character, an old lady with a pointy nose and chin and looking wrinkly, as it was how I imagined her. We didn't actually meet until the book-launch party; it was a good first encounter and there was a great connection. I think when we first started working together Julia quite often thought, "That's not what I had in mind for the character!" We've been [creative] partners for 20 years now. Julia Donaldson MBE, 64 The current Children's Laureate is a publishing sensation, penning more than 150 works since her debut in 1993.

How to meet the needs of child prodigies? - news Comment:4.3 average rating | Comments (2)Last Updated:28 February, 2013Section:news Some children are exceptionally intelligent and capable of racing through their education. Kerra Maddern talks to four such prodigies and their families about their experiences To many, the idea of a childhood genius - a prodigy, if you will - has an almost mythical quality. But isn’t it an impossible paradox? These children look like any other children. Instead, most live normal lives, having fun, taking part in games; but all the time they are having to combine this with possessing an exceptional intellect, which means they often celebrate achievements most children attain years later. TES has met some of these young people trying to negotiate the tricky path between making the most of their academic gifts and having the freedom to act their age. Wajih Ahmed Wajih is the University of Southampton’s youngest ever student, having started his economics degree at 14. “The rest of the time he spent playing.

How Japanese Kids Learn To Multiply – Amazing, No Need to Learn Japanese Thank you to everyone who has shared this post! Before we discuss this great method of multiplying numbers, if you are after a great power point slide show to use in the classroom to improve times tables and multiplication skills then you will find this useful. If you enjoyed using the resource above then make sure to check out the games and tricks available to help develop, practice and learn times tables skills. I came across this method though a Japanese friend and it shows how Japanese pupils learn to multiply in maths lessons at a young age. The Japanese method has proven very popular from the retweets and the feedback I have received from fellow practitioners. Now for the Japanese Method, when looking at this process it makes you ponder how we are teaching Mathematics to the kids of tomorrow in the west in comparison to the learning of Japanese students. How Japanese Kids Learn to Multiply Video Tutorial Five Examples of the Japanese Multiplication Method

The No.1 App for Every Teacher…. | syded Not all apps are created equal. The first version of Explain Everything was good. The second version is outstanding. As an educator my life revolves around learning, organisation, workflow and school requirements. Lessons are delivered, work is assessed and data is recorded. At its base level Explain Everything is an interactive whiteboard into which you can insert text, pictures and videos. An existing presentation can be imported into the app from a Dropbox or GoogleDrive account. Similarly a teacher can record anything that happens in class, via the camera, and then annotate/comment on the work. (courtesy of Digital First Ohio State) As you can see from the ‘how to’ video there are a number of different functions in the new version of Explain Everything that lend themselves to the classroom. Explain Everything can also have an impact on assessment. Explain Everything is a ‘must-have’ application for teachers who have access to an iPad. Like this: Like Loading...

Brave Heads – a review | Classroom creativity! | Sparky Teaching If you’re not familiar with the brilliant ‘Yes Prime Minister’, there’s a running joke throughout the series. Whenever Jim Hacker, the hapless Prime Minister is told by Sir Humphrey Appleby that he’s made a “courageous” decision, he panics and changes his mind. In his world, a courageous decision is definitely not a good thing — in fact it means his neck is almost certainly on the line… When our copy of ‘Brave Heads’ arrived on the doormat, guess what the first thing that sprung to mind was? (fade to a Head’s office in a where the chair of governors is peering over a sheaf of papers) CHAIR: (concerned) Just to make you aware, this is a very brave plan, Headteacher.HEADTEACHER: (gulps) Brave, you say? (Roll credits) Well, it amused us anyway. The second thought we had was that this was going to be a book entirely for school leaders. We were wrong. Thankfully Dave Harris has nothing of Sir Humphrey about him! There are 64 in all — this is just a sample. HERE’S WHERE TO FIND IT ON AMAZON.

The Lost Art of Nurturing Sparks | Classroom creativity! Behind every new idea, article or resource we do is usually something that inspired or provoked us into action. Our CPD posters were inspired by a poster idea we were sent by @paulyb37 on Twitter. The ‘M’ Files were provoked by a question we saw in a SATs paper and our ensuing annoyance! Recently we saw something that motivated us once again. Our new resource is called SHINE! Standardised testing has a lot to answer for in terms of dampening sparks in young people. The second is a Twitter profile description that struck a chord when we saw it recently: In the above video, Peter Benson talks about a developmental study he had made about the things that make young people thrive. It’s not a long talk and well worth investing twenty minutes in. 1.

Learning and Teaching with iPads