Paul Allen: The Singularity Isn't Near 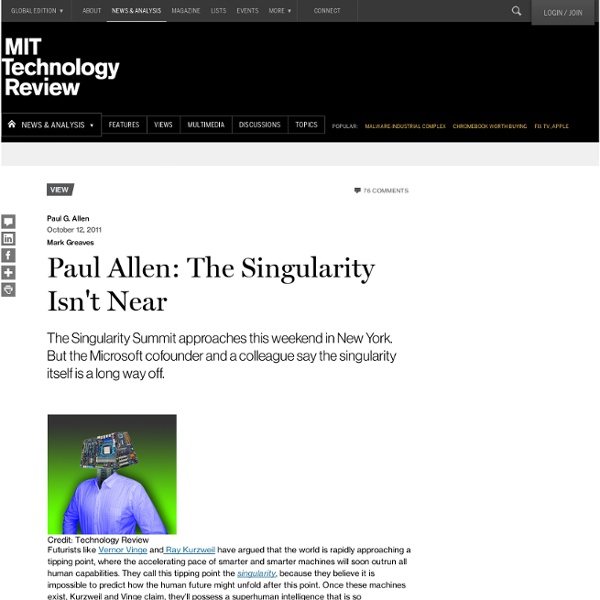 Futurists like Vernor Vinge and Ray Kurzweil have argued that the world is rapidly approaching a tipping point, where the accelerating pace of smarter and smarter machines will soon outrun all human capabilities. They call this tipping point the singularity, because they believe it is impossible to predict how the human future might unfold after this point. Once these machines exist, Kurzweil and Vinge claim, they’ll possess a superhuman intelligence that is so incomprehensible to us that we cannot even rationally guess how our life experiences would be altered. Vinge asks us to ponder the role of humans in a world where machines are as much smarter than us as we are smarter than our pet dogs and cats. Kurzweil, who is a bit more optimistic, envisions a future in which developments in medical nanotechnology will allow us to download a copy of our individual brains into these superhuman machines, leave our bodies behind, and, in a sense, live forever. It’s heady stuff. The AI Approach

CHARTS: Here's What The Wall Street Protesters Are So Angry About... The "Occupy Wall Street" protests are gaining momentum, having spread from a small park in New York to marches to other cities across the country. So far, the protests seem fueled by a collective sense that things in our economy are not fair or right. But the protesters have not done a good job of focusing their complaints—and thus have been skewered as malcontents who don't know what they stand for or want. (An early list of "grievances" included some legitimate beefs, but was otherwise just a vague attack on "corporations." So, what are the protesters so upset about, really? Do they have legitimate gripes? To answer the latter question first, yes, they have very legitimate gripes. And if America cannot figure out a way to address these gripes, the country will likely become increasingly "de-stabilized," as sociologists might say. In other words, in the never-ending tug-of-war between "labor" and "capital," there has rarely—if ever—been a time when "capital" was so clearly winning.

Transhumanism Criticisms - Future Criticisms of transhumanism take two main forms: those objecting to the likelihood of transhumanist goals being achieved (practical criticisms); and those objecting to the moral principles of transhumanism (ethical criticisms). However, these two strains sometimes converge and overlap, particularly when the ethics of changing human biology in the face of incomplete knowledge is considered. Critics or opponents of transhumanism often see transhumanists' goals as posing threats to human values. Some of the most widely known critiques of the transhumanist program refer to novels and fictional films. Futurehype argument (infeasibility) In his 1992 book Futurehype: The Tyranny of Prophecy, sociologist Max Dublin points out many past failed predictions of technological progress and argues that modern futurist predictions will prove similarly inaccurate. Major paradigm shifts seem to show that many technologies are evolving in an exponential pattern. Playing God arguments (hubris) See Also

Google Engineer: “Google+ is a Prime Example of Our Complete Failure to Understand Platforms” Last night, high-profile Google engineer Steve Yegge mistakenly posted a long rant about working at Amazon and Google’s own issues with creating platforms on Google+. Apparently, he only wanted to share it internally with everybody at Google, but mistaken shared it publicly. For the most part, Yegge’s post focusses on the horrors of working at Amazon, a company that is notorious for its political infighting. The most interesting part to me, though, is Yegge’s blunt assessment of what he perceives to be Google’s inability to understand platforms and how this could endanger the company in the long run. The post itself has now been deleted, but given Google+’s reshare function, multiple copies exist on Google’s own social network and elsewhere on the web. Google+ Is a Knee-Jerk Reaction Here is the meat of his argument: “Google+ is a knee-jerk reaction, a study in short-term thinking, predicated on the incorrect notion that Facebook is successful because they built a great product. Ha, ha!

We Need a New System In the Spring of 2000, my friend and former colleague Zack Exley arrived in Washington, DC, to observe the protests that had engulfed the city during the World Bank's annual meeting. Driving into Washington from the airport, out the window of his taxi he saw "a teenage white girl with long dreadlocks who wore a homemade t-shirt proclaiming: WE NEED A NEW SYSTEM." Later that evening he attended a party at the home of then-Secretary of the Treasury Larry Summers along with "ambassadors, politicians, esteemed professors and what seemed like the entire combined senior economist staff of the IMF, World Bank and Treasury." It turned out Larry Summers had seen the girl too and was eagerly telling his guests about an interaction he had with her: And so I asked the girl: 'What is this new system that you want? "Mr. Summers chuckled and the conversation moved on. In 2000, Larry Summers tried to outsource fixing a global economic system he bore responsibility for to a girl in dreadlocks.

No death and an enhanced life: Is the future transhuman? The aims of the transhumanist movement are summed up by Mark O’Connell in his book To Be a Machine, which last week won the Wellcome Book prize. “It is their belief that we can and should eradicate ageing as a cause of death; that we can and should use technology to augment our bodies and our minds; that we can and should merge with machines, remaking ourselves, finally, in the image of our own higher ideals.” The idea of technologically enhancing our bodies is not new. But the extent to which transhumanists take the concept is. Is that a desirable goal? There is no doubt that human enhancement is becoming more and more sophisticated – as will be demonstrated at the exhibition The Future Starts Here which opens at the V&A museum in London this week. In many cases these technological or medical advances are made to help the injured, sick or elderly but are then adopted by the healthy or young to boost their lifestyle or performance. And that is just the start, say experts.

plucky tree: the last time I saw Steve Jobs I worked at Apple from April of 1999 through July of 2011. I’ve never written publicly about that experience, but I wanted to share a little moment that will always be with me, even though it’s not of any great significance. After leaving my job at Apple, I dropped in for lunch one day. I was exiting the main building, Infinite Loop One, and just ahead of me was Steve Jobs, walking with the usual spring in his step that never seemed to go away even as he started looking more frail. Bumping into Steve was a surprisingly common occurrence for such a large company as Apple. Steve was heading towards a car parked next to the curb with its door open, waiting for him. Steve paused for a moment as an iPhone was extended to him, realizing that they didn’t seem to know who he was. Steve took a great deal of care composing the photo, backing up a few steps several times, tapping the iPhone screen to lock focus, then said “Smile!” And that was the last time I saw Steve Jobs.

The Three Laws of Transhumanism and Artificial Intelligence Source: Wikimedia Commons I recently gave a speech at the Artificial Intelligence and The Singularity Conference in Oakland, California. There was a great lineup of speakers, including AI experts Peter Voss and Monica Anderson, New York University professor Gary Marcus, sci-fi writer Nicole Sallak Anderson, and futurist Scott Jackisch. All of us are interested in how the creation of artificial intelligence will impact the world. article continues after advertisement My speech topic was: The Morality of an Artificial Intelligence Will be Different from our Human Morality Recently, entrepreneur Elon Musk made major news when he warned on Twitter that AI could be: "Potentially more dangerous than nukes." The coming of artificial intelligence will likely be the most significant event in the history of the human species. Naturally, as a transhumanist, I strive to be an optimist. But is it even possible to program such concepts into a machine? I don't think so, at least not over the long run.

Generally Assembled at #OccupyWallStreet—By Nathan Schneider The nightly meetings of the General Assembly at occupied Liberty Plaza (officially, Zuccotti Park) in New York have been treated by the media mainly as a quaint footnote to the mass arrests and alleged police brutality attendant to the occupation. In fact, though, the open, non-hierarchical assembly has been at the center of the movement. Starting with the planning meetings that took place in parks around the city prior to September 17, it was instrumental to bringing the #OCCUPYWALLSTREET Internet meme created in July by Adbusters magazine into real life. And as the occupation movement has caught on and spread from city to city, open assemblies have been spreading alongside. Participating in the assembly process can take some getting used to. Each night at Liberty Plaza since the occupation began, a few hundred people have clustered in loose, semicircular rows to attend the GA.