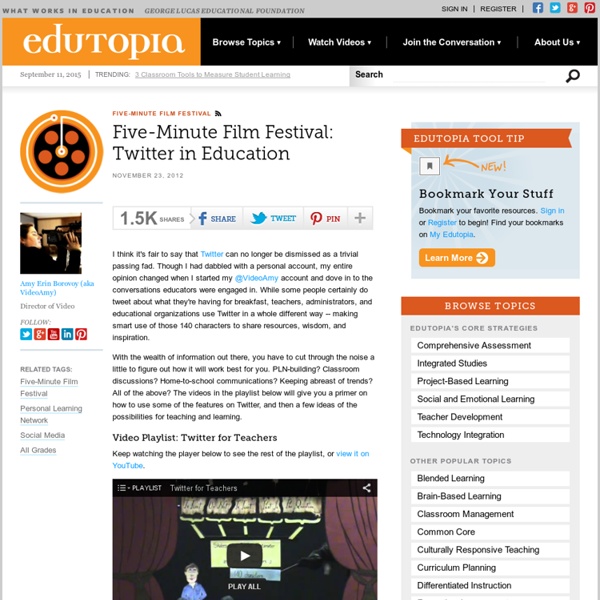 I think it's fair to say that Twitter can no longer be dismissed as a trivial passing fad. Though I had dabbled with a personal account, my entire opinion changed when I started my @VideoAmy account and dove in to the conversations educators were engaged in. While some people certainly do tweet about what they're having for breakfast, teachers, administrators, and educational organizations use Twitter in a whole different way -- making smart use of those 140 characters to share resources, wisdom, and inspiration. With the wealth of information out there, you have to cut through the noise a little to figure out how it will work best for you. PLN-building?

9 Simple Tips For Connecting With Your Students On Twitter Twitter Fiction Festival As part of the Twitter Fiction Festival, W. W. Norton will broadcast Shakespeare's best monologues and sonnets, line by line, via re-tweets of the Bard's timeless words already posted by Twitter users. The result will be a crowd-sourced, real-time, dramatic performance of the classic works that brings Twitter into the telling. Follow along at @wwnorton and re-tweet with us.

Again; Relevance, Why Twitter November 29, 2012 by tomwhitby Twitter has been a topic for educational Bloggers for several years now. I believe that those educators using Twitter are drawn to those posts, while other educators, not using Twitter, are driven away. I earned an advanced degree in Educational Technology over 30 years ago. In the distant past, teachers were able to maintain their relevance based on printed journals, newspapers, and magazines. Educators need a better way to communicate about change in order to maintain their relevance. Too bad an application of Social Media like Twitter was developed for such a frivolous purpose. If only an educator with the highest of degrees would invent such a collaborative tool for educators to do all of the same collaboration with real valuable education stuff? I must admit that this post comes from the frustration of listening to the many excuses from educators who choose not to use Twitter. Like this: Like Loading...

wwnorton : We're excited to be part of... Our Biggest Twitter Tips For Teachers For many teachers making a foray into the edtech world, Twitter is an excellent tool for consuming and learning. There are a number of great resources out there to help teachers follow people who will be useful to them based on location, subject, grade level, and technology being used. Many are also harnessing Twitter as a part of their PLN (personal learning network) to connect, share, and network. So how do you bridge the gap from reading tweets in your feed to truly harnessing the power of Twitter in the edtech realm? Check out our biggest Twitter tips for teachers below! Care to add your tips? Create, Don’t Just Consume The best way to get the most out of Twitter is to use it. Connect and Network When you’re just getting started on Twitter (or perhaps trying to add to or refine your feed), a resource for educational hashtags or guides to great accounts to follow are excellent resources to point you in the right direction. Share Your Resources Keep At It

Twitter CEO Dick Costolo: Users Can Download Their Entire Archive By Year-End; Now Sees 1B Tweets Every 2.5 Days Twitter CEO Dick Costolo has once again promised that Twitter users will, indeed, be able to download a full archive of their tweets in just a matter of weeks. This latest announcement was delivered in response to an audience question during a talk sponsored by the Ford School of Public Policy and School of Information at Costolo’s alma mater, the University of Michigan, where the CEO discussed Twitter’s role in the future of global communication and democratized access to information. This isn’t the first time Costolo has made this promise, mind you. From the sounds of this latest report, the hard deadline Costolo keeps promising isn’t earning him any friends among Twitter’s engineering team working on the project. “By the end of the year I’ve already promised this, so the engineers – when I promised it publicly they’re already mad at me so they can keep being mad at me,” said Costolo at UM. OK then. You can imagine why those engineers would be mad – the undertaking is no small matter.

Educators: Embrace Social Media What is up with teacher development and the fear of social media? So many educators are soaring into the next advent of learning, while others continue to lecture and talk at the kids, avoiding the digital tools that are so readily available. Yesterday, in a passing conversation discussing sharing of great resources, I asked a colleague if they knew what a PLN is? ”Huh?” she said. My world has become immersed in Twitter; I find it to be one of the single most important tools in my own daily professional development. I’d like to mention some of my educationally revered friends and give them a little plug since they have helped me grow. Now, don’t get me wrong… my friends on Twitter are more like colleagues. 25 Ways To Get The Most Out Of Twitter by Jeff Dunn (just posted yesterday so we must have had some mental telepathy going on.) the founder of Edudemic, states that, Twitter may very well be the single most important tool for teachers right now. Here’s what I think:

Why I love Twitter and barely tolerate Facebook — I.M.H.O. For the past decade, I’ve tried every new social media product to come along but I find myself returning to the two giants of the industry most often: Twitter and Facebook. I’m optimistic and delighted every time I open up Twitter on my browser, while Facebook is something I only click on once or twice a day and always with a small sense of dread. This week I sat down to think about why that is. Twitter put simply is fun, fantastic, and all about the here and now. There’s no memory at Twitter: everything is fleeting. Facebook is mired in the past. My experiences with Facebook are roughly similar. Touching base with an old acquaintance is all about catching up. If I look at everyone I’m following on Twitter, by and large they are peers I’ve known for the past few years in my current circle of friends, people that excite me with new ideas, music, and art, and lots of humor. I like my current social circle of friends and their thoughts, jokes, and ideas they share each day on Twitter.

Does Twitter Improve Education? cc licensed ( BY SD ) flickr photo shared by Ed Yourdon There has been post after post acknowledging how educators love Twitter while also encouraging others to use it themselves. With that though comes skeptics (as there should be), questioning whether the use of Twitter is beneficial to educators. I have thought about that question a lot and I can give a definitive answer: yes and no ( I am 100% certain of this). So to prove this, we have to look at a few things. Scenario A – Being on Twitter for the sake of being on Twitter When I first started Twitter, my first follows were my brother, Shaquille O’Neal and every other Laker related Twitter account I could find. Scenario B -Using Twitter to follow and learn from other educators A year later, I went back to using Twitter in a totally different fashion and followed educators, found some great information on things that were happening in classrooms and schools, and it took my learning to a different level.

Twitter's New Image Search Takes Aim At Instagram Late last week Twitter rolled out a new image search function that previews photos at the top of queries. This improvement has been in the works for some time, and is a step towards a head-to-head battle between Twitter and social image giant Instagram. Twitter says the move was made to "highlight the photos, videos and news shared on Twitter, all wrapped up in more social context," according to Tian Wang on the Twitter blog. Search, Post, Share Right now, image results are only for selected terms. Since its 2006 debut, Twitter has built a base of 140 million users and dominated the micro-blogging world. The addition of highlighted video news.Image previews for articles and stories.The new photo search.Rumors of adding filters to images. Despite Twitter's attempts, though, Facebook's Instagram, with a reported 100 million users, has kept its stranglehold on social photography. Social media strategist Nick Cicero says Twitter's latest move is a fight to own social images.

Why Students Should Use Twitter I must admit I was skeptical and originally questioned the validity of Twitter. I initially viewed Twitter as just a tedious free service that lets you send a 140-character message, or “tweet to your followers” of lackluster and hum-drum information. I was not really interested in reading about the location of someone checking in on Four Square or what he or she was eating for dinner. See Also: It’s Official: Using Twitter Makes Students More Engaged Yet, I was totally surprised at all the benefits that Twitter provides to high school and college students. Every student should use Twitter. The Importance Of Access There are loads of scholarships, essay contests, STEM competitions and grant opportunities for middle school, high school and college students posted daily on Twitter. But it’s not for only journalism students of course. Connect To A Wider Audience Twitter was launched in July 2006. Students Can Tweet For Good