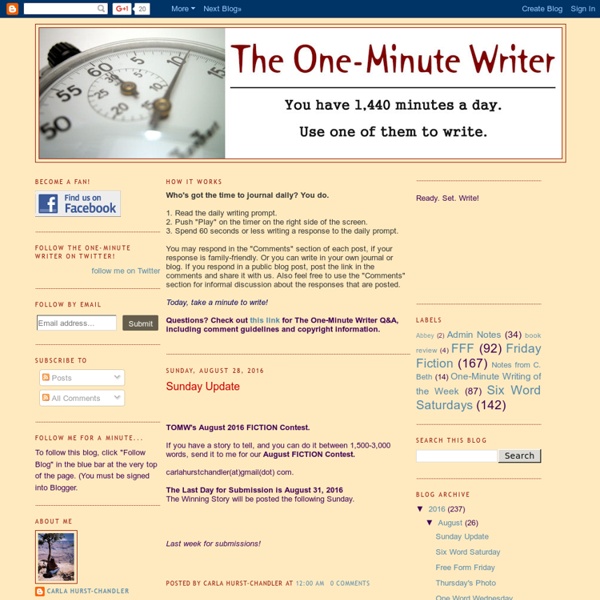 What to do after NaNoWriMo If you found a month madly dedicated to one project exhilarating amidst the exhaustion :-) there are more challenges throughout the year, some lasting a month, some a week, some 3 days, some 24 straight hours. :-) (The NaNoWriMo folks aren't affiliated with any of these except Script Frenzy.) From the I Wrote a Novel, Now What? page at the NaNoWriMo site which might have more challenges added throughout the year (plus a few free contests). DecemberNaNoFiMo.org - National Novel Finishing Month (December). Varies or throughout the yearNaBloPoMo - National Blog Posting Month (Year-Round). JanuaryJanNoWriMo - Goal: Write either 50k or your own word-count goal in January. FebruaryFAWM - February Album Writing Month (February). MarchNaNoEdMo - National Novel Editing Month (March). AprilScript Frenzy - NaNoWriMo's sister challenge (April). MayNational Picture Book Writing Week - (First week of May). JuneComiKaze - Create a 24 page comic in 24 hours. September3-Day Novel Contest - (September).

Creative writing prompts that you can do in 10 minutes What can you write in 10 minutes or less? Let’s find out! For a quick creative writing exercise, try one of the 20 writing prompts below, excerpted from Chronicle Books’ 642 Tiny Things to Write About. Each prompt was created by a writing teacher at the San Francisco Writers Grotto to be done in 10 minutes or less. Write a eulogy for a sandwich, to be delivered while eating it. Write the ad for an expensive new drug that improves bad posture. Think about your day so far (even if it’s still morning). Write the first communication sent back to Earth after humans land on Mars. Finish this sentence: The smell of an orange reminds me of…. A genie grants you three tiny wishes. It’s 1849, and you’re headed West along the Oregon Trail. Write the passenger safety instructions card for a time-travel machine. An undercover spy is about to impersonate you in all aspects of your life. Write your life story in five sentences. It’s 2018. Which is the oldest tree in your neighborhood, and what has it seen?

10 Videos You Could Use to Inspire Writing. From the time teachers first viewed The Piano by Aidan Gibbons on a training course, it suddenly became legitimate to use short independent film to inspire writing. Films like the Piano are perfect for lessons as they are often: Emotive and thought-provokingAesthetic - the animation is often captivating and of high qualityShort and therefore easy for children to take in and teachers to build questioning aroundOriginal – as the children have not seen the film before they do not come at the clip with expectations or baggage. I love finding clips which I use with my class as a weekly alternative to class story. Alternatively I use a well-chosen piece as part of our literacy work for a way into poetry or story writing. I have also found that embedding a clip on our class blog has led to some excellent review writing. Though I have watched these myself and feel they are appropriate to use in class, I do advise you to watch any of these clips all the way through and make up your own mind.

Suggestions for 10-Minute Writing Exercises Sometimes you wake up and the creative wellsprings are dribbley and dry. Sometimes your project (if you currently have one) feels as appealing as the sweaty insoles of your old gym shoes. You could put your feet back in there, but yuck. Sometimes your feet want to just run free and naked on a sandy beach, in slow motion, with the man of your dreams their dreams? I'm confused running towards you them? Okay, then. And some are courtesy old Dribbley-and-Dry me. Suggestions for 10-Minute Writing Exercises Write three 3-minute stories (use a timer, starting exactly when the timer starts and stopping exactly when the timer stops). Write about the time you were most frightened. Choose any two of the following lines. "Me," she thought, "pick me." Choose a different color each day. Try writing right when you wake up, without getting out of bed, without talking to anyone or reading anything. What’s the worst job you can think of? Write a list of seven words you like. What is your favorite flavor?

Short Stories: 10 Tips for Creative Writers (Kennedy and Jerz) (Dennis G. Jerz, Seton Hill University) Writing Prompts Posted by Melissa Donovan on October 22, 2015 · Journal prompts to make you laugh. Have you ever tried to write comedy? It’s not easy. Artists are often regarded as a tortured bunch. But comics form the ranks of some of the most talented artists in the world. After all, art must reflect life and life is a balance of highs and lows. Posted by Melissa Donovan on September 17, 2015 · Get creative with these story starters. Are you a storyteller? If you’re interested in writing flash fiction, short stories, or novels, then you’re going to need lots of ideas, especially if you want to write professionally. Some of us have too many ideas; others don’t have enough ideas. Story starters are a great way to get ideas for writing stories, but they can also be used to generate ideas for improving stories that are already in the works. Story Starters Today, I’d like to share twenty-five story starters. Posted by Melissa Donovan on August 18, 2015 · Poetry prompts inspired by family. “Ssh, don’t tell anyone.

Telescopic Text Where Should a Second Chapter Start? on October 12th, 2010 by Fiction Editor Beth Hill and last modified on October 12, 2010 We’ve all read advice about the first chapter—how and where to begin a story; what makes for strong openings, depending on the genre; what not to include in the first paragraph or page of chapter one; what to include in a novel’s opening. We understand that a good opening chapter sets the tone and introduces lead characters and gets the plot rolling. We know almost as much about the final chapter, the final paragraph, and the final words. About how to finish a story so that it’s complete and satisfying and induces the reader to want more. Yet, where’s the advice for chapter two? What do we do to move from that compelling first chapter—the one that’s seen more rewrites than all other pages combined and multiplied by 10—and into the meat of the story? We certainly want to continue the tone we’ve established. Sure there are. Where should a second chapter start? 1. 2.

10 Thanksgiving Writing Prompts Inspired by Children's Literature Want to do a little Thanksgiving writing in your classroom this year? Look no further than some of your favorite children's books for inspiration. 1. What kind of pie do you like best? From Harold and the Purple Crayon by Crockett Johnson 2. From The Thankful Book by Todd Parr 3. From I am a Bunny by Ole Risom, illustrated by Richard Scarry 4. From Home by Carson Ellis 5. From Over and Over by Charlotte Zolotow, illustrated by Garth Williams 6. From All the World by Liz Garton Scanlon, illustrated by Marla Frazee 7. From Where the Sidewalk Ends by Shel Silverstein 8. From The Relatives Came by Cynthia Rylant 9. From It's Thanksgiving by Jack Prelutsky, illustrated by Marilyn Hafner 10. From Thank You, Sarah, by Laurie Halse Anderson, illustrated by Matt Faulkner What books do you always read with your students during Thanksgiving time?