Nine Ways to Build Your Own Social Network 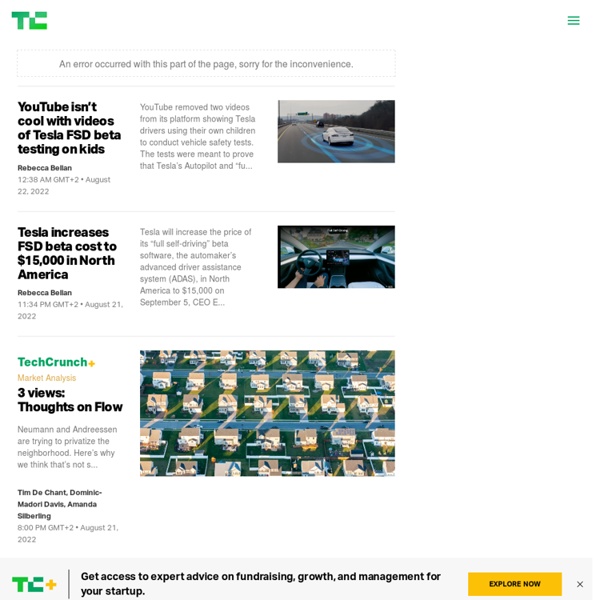 An error occurred with this part of the page, sorry for the inconvenience. The news may overflow with stories about the social networking giants, such as Facebook and MySpace, but a horde of companies are doing their best to reduce the fundamental features of these websit... YouTube removed two videos from its platform showing Tesla drivers using their own children to conduct vehicle safety tests. The tests were meant to prove that Tesla’s Autopilot and “fu... Tesla will increase the price of its “full self-driving” beta software, the automaker’s advanced driver assistance system (ADAS), in North America to $15,000 on September 5, CEO E... In its five years as a standalone automaker, Polestar has placed into production two vehicles and announced the delivery schedule of four additional vehicles. Welcome to The Interchange! Welcome back to Chain Reaction. Hello hello! Welcome to Startups Weekly, a fresh human-first take on this week’s startup news and trends. Welcome to The Interchange!

How to convince anyone of anything This topic was requested with a slightly different title: How to make a convincing argument. The word argument itself makes people think of lawyers or divorce proceedings, which isn’t a great start for helping them like what you’re going to say. It’s worth starting with the more positive word: convince. You should know we stink at convincing others and at being convinced by others. No matter how persuasive you are most people will not hear you. If you must, a secret for pitching, persuading, selling or inspiring is to focus on the individual person you’re talking to. Instead, work the opposite way. It’s hard to convince anyone of anything if your mind isn’t just as open as you are demanding theirs to be. But most people find this boring. Also see:

Social Networking A lot of software These are some of the more promising Free Software packages that provide social networking services. Elgg is pulling away as the leader in this area and is rapidly becoming the poster child for Free and Open Source social networking software. I’ve played around a bit with the version at community.elgg.org and it’s definitely a nice piece of software. The protocols The outlook on the protocol level isn’t particularly heartening. The aforementioned Open Data Definition standard is intended to allow users to transfer their identities from one server to another. There’s a big vacuum in this area in terms of projects and leadership; hopefully efforts like the W3C’s Workshop on the Future of Social Networking will bring more attention to the problem. What is to be done? Clearly, we’re reaching a cusp for Free Network Services for social networking.

34 More Ways to Build Your Own Social Network A few weeks ago we posted 9 Ways to Build Your Own Social Network, a review of several hosted, do-it-yourself white label social networking solutions. Conspicuously missing from that round-up were many additional companies that specialize in the creation of social networks. These companies were intentionally overlooked in the first post because we wanted to focus on self-service websites. In this second post, we cover these remaining companies, all of which offer either made-to-order solutions or downloadable software. When reviewing Ning, KickApps, et al., I was able to test the products first-hand by creating social networks from scratch and for free using online wizards and tools. Detailed information about the companies is presented in the interactive chart to the right, which features additional information in popups and the ability to select only particular companies for comparison. (Update: Awareness has been added to the chart, raising the total to 35)

Top 10 Professional Sample Code Websites For Programmers | MakeU Most programmers are not just desktop programmers, web programmers or scripting gurus – they are often all of the above. Over time, most software developers find that it’s much easier to re-use code components than it is to recreate the wheel every time you write an application. Over time, these developers typically archive a library of these reusable modules in order to save time the next time they need to do the same task. Now, thanks to the power of the Internet, there is a proliferation of websites where professional programmers offer these modules to the general public for absolutely free. Choosing the Top Websites for Sample Code Every developer has a list of their favorite websites where they not only search for free sample code, but they also take part in the developer community that exists at these sites. The following is, by no means, an exhaustive list of the best developer websites online. #1 – Programmer’s Heaven #2 – SourceForge.net #3 – CodeGuru #4 – The Code Project #5 – DevX

SOCIAL NETWORKING GOD: 350+ Social Networking Sites One of the main topics here at Mashable has always been social networking. In the past several years, some networks have thrived, some vanished, while hundreds of new ones appeared. It has become a huge area to follow, and this article illustrates this well: a collection of over 350 social networking sites, all of which were covered in one way or another here at Mashable. We hope to have created an extensive and useful resource for anyone interested in social networking. Enjoy. Feel free to add more apps in the comments. Books Americabookshelf.com - One of the largest book exchange clubs across the US. BooksConnect - A book sharing community site connecting readers, authors, publishers, librarians and booksellers. BookCrossing.com - A community of users from over 130 countries who exchange books with each other at public places like cafes, parks etc. Bookhopper.co.uk - Free community for UK residents to share used books with each other. Socialbib - Book swapping network between students.

Omegle PEERS | professional communities The human-computer algorithm The New York Times has published this ode to the algorithm. They write: Algorithms, as closely guarded as state secrets, buy and sell stocks and mortgage-backed securities, sometimes with a dispassionate zeal that crashes markets. Algorithms promise to find the news that fits you, and even your perfect mate. You can’t visit Amazon.com without being confronted with a list of books and other products that the Great Algoritmi recommends. The article is in a section titled "Artificial Intelligence - Computers and the Internet", but the focus of the article is the trend of algorithmically harnessing human intelligence -- the goal of Luis Von Ahn. A constantly buzzing mechanism with replaceable human parts. Generally Wikipedia is thought of as an entirely human project, but is it a giant distributed fault-tolerant algorithm? For other takes on this article, see here.

Shaping Your Community: What Films Did, Games Must Do The game industry has always been supported by enthusiastic communities of gamers. However, the relationship between development teams and the gaming public is often typified by either reticence or tension. For years, the communities and groups springing up around game releases have been left to their own devices. With the rise of the casual game market and wider acceptance of games, we take a look at what can be learnt from how films have capitalized on their enthusiasts and wider public following. The success of The Lord of the Rings, and films like it, represents an against-the-odds production that drew heavily on support from an enthusiast community. However, this trilogy employed a strategy that involved fans in the project each step of the way. "My team and I have poured our hearts into this project for the past three years, so it's a great thrill to begin actual photography. This transparency soon garnered respect and interest from both fans of the books and the wider public.

lifeIO: A Social Media Dashboard That Combines Email, RSS, And Just About Everything Else For many people, the web has fallen prey to information overload — from RSS readers to Email to social networks, we’ve all got vast amounts of data coming in at any given time, oftentimes to entirely different places. Many services have sprung up to try to tackle this problem, including FriendFeed, but most of them don’t even try to integrate Email. LifeIO is a new startup launching today in private beta that’s trying to do it all, with integration of Email, calendars, and your social networks. The first 100 TechCrunch readers to visit this link will be able to grab an invite. lifeIO is meant to serve as a control panel for all of your communication, featuring tabs for Email, calendar, note taking, social sites, and RSS — in other words, a one-stop-shop where you can conduct the vast majority of your online activities. The site has some good ideas — I especially like the real-time stream of new content that shows as new blog posts are appearing from my RSS feeds.

Awesome Visualization of Social Media Usage Around the Globe [In Want to know how many people are microblogging in Australia? Or uploading photos online in Brazil? Or writing blogs in the Netherlands? There’s a map for that — literally. TrendStream, who publishes the Global Web Index, has created a fantastic visualization that shows the penetration of different social technologies in major markets around the globe. The research is based on interviews with 32,000 Internet users in 16 countries.A few of the findings they report: "The massive impact of China: The vast Internet population coupled with hugely socially active set of web users, makes for a massive volume of content creators. Here’s the full map for your viewing pleasure (you'll want to blow it up to full screen):

The Downside » Blog Archive » Amazon forges yet another beaten p I guess Bezos is getting tired of the ecommerce biz – Amazon has just released their Askville Social Q&A service, a competitor to sites like Yahoo Answers, MSN Live QnA, and my own Answerbag(which predates all of them, incidentally. Not being snippy, just pointing it out so the title of this post doesn’t sound hypocritical.) I suppose for Amazon it’s opportunistic – they saw it work at Yahoo Answers, so they did it themselves, and they have enough traffic already to make almost any social service work. (I won’t pretend that they were imitating Answerbag, the smaller, nimble competitor!) It works essentially the same way as Yahoo Answers and MSN’s service, but it’s actually even more limiting – when someone asks a question, only 5 people can give answers, and then those five people are the only ones who can evaluate the answers and decide which one is the best. They’re probably right. I will give them credit for Map Answers – neat idea, and it was implemented well. ShareThis