Financial impact for golf felt all around with Tiger Woods gone 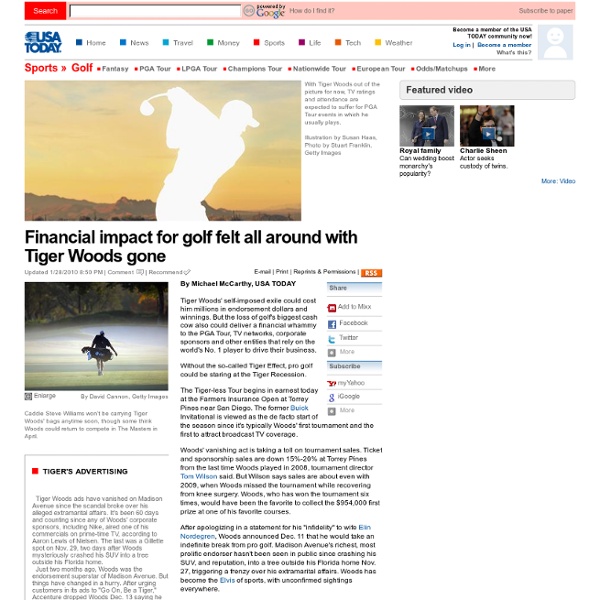 By Michael McCarthy, USA TODAY Tiger Woods' self-imposed exile could cost him millions in endorsement dollars and winnings. But the loss of golf's biggest cash cow also could deliver a financial whammy to the PGA Tour, TV networks, corporate sponsors and other entities that rely on the world's No. 1 player to drive their business. Without the so-called Tiger Effect, pro golf could be staring at the Tiger Recession. The Tiger-less Tour begins in earnest today at the Farmers Insurance Open at Torrey Pines near San Diego. The former Buick Invitational is viewed as the de facto start of the season since it's typically Woods' first tournament and the first to attract broadcast TV coverage. Woods' vanishing act is taking a toll on tournament sales. After apologizing in a statement for his "infidelity" to wife Elin Nordegren, Woods announced Dec. 11 that he would take an indefinite break from pro golf. The biggest money-loser from the Woods sex scandal appears to be Woods. The stakes are high.

Tiger’s Return Expected To Make PGA Ratings Roar When Tiger Woods tees off later today at the Accenture Match Play Championship, he won't be the only one relieved by his return to the links. In fact, PGA Tour officials and TV executives might have more of a reason to celebrate than Tiger himself. The Nielsen Company compared the network TV ratings for the 3rd and 4th rounds of golf tournaments played by Woods after the U.S. Open in 2007 with those same tournaments he missed in 2008 due to a season-ending knee injury. And the results are just what you might expect: Tiger's absence almost singlehandedly sliced tour ratings in half. The average household rating/share for the 2007-08 tournaments played by Tiger was 3.3/8.

Tiger Woods « BrandDunk BrandDunk has covered different aspects of how Tiger Woods situation will affect his endorsements. Today we have a talented guest author who offers a fresh perspective on the situation to let sponsors know when to expect a return to normal. This guest post is authored by Casey Harverstick, a freelance writer who has written for ESPN.com and ESPN the Magazine. Tiger Woods sex scandal changed sports reporting forever - News Updated Nov 23, 2010 6:54 PM ET Happy anniversary, Tiger! Hard to believe it’s been only a year since the world’s most beloved, clean-cut, fresh-faced sports icon and high-end product pusher attacked an as-yet-unrevealed hard object with his theretofore fresh face. A lot has changed in the past 12 months. After a record 281 straight weeks at the top, Tiger Woods is now ranked No. 2 behind Lee Westwood.

Tiger Woods scandal and his endorsements Tiger Woods has never shanked a drive this badly in his life. First, Tiger was challenged by the outlandish accusations of the National Enquirer, then came the suspicious single-car accident early on Friday morning, and now reports in US Weekly of another affair have put Tiger in some of the deepest rough he has ever stumbled upon. The last encounter proved to be the tipping point for Woods, who released another statement this afternoon. Did Nike Really Gain From Tiger Woods' Scandal, as the Numbers Suggest? Last Updated Dec 14, 2010 8:38 PM EST From a financial point of view, Nike (NKE) was right to stick by Tiger Woods despite the scandal that enveloped him in 2009, but the fascinating new study that makes this case also suggests that when brands encounter controversy they ought to destroy the village in order to save it, so to speak. That can't be right. Carnegie Mellon University's Tepper School of Business looked at Nike golf ball sales from the pre- and post-Woods scandal periods, in which most brands chose to sever their ties with Woods. The academics compared that to the effect Woods had on Titleist before and after he ended his endorsement of that company in 2000. Overall, the scandal cost Nike $1.7 million in sales and lost the company nearly 105,000 customers, the study shows:

Tiger Woods' Affairs Cost Billions in Stock Market Tiger Woods' extramarital affairs could cost you if you hold stock in a company he sponsors or a mutual fund that holds stock in those companies. A new study — not yet published in a journal — finds the market value lost to companies that had the golfer as a sponsor is already as high as $12 billion. The estimate is separate from whatever money Woods himself may lose as a result of his missteps. The golfer was thought to make about $100 million a year in endorsement income. "Total shareholder losses may exceed several decades' worth of Tiger Woods' personal endorsement income," said Victor Stango, a professor of economics at the University of California, Davis and co-author of the study. Stango and a colleague looked at stock market returns for the 13 trading days that fell between Nov. 27, the date of the car crash that ignited the Woods' scandal, and Dec. 17, a week after Woods announced his indefinite leave from the sport.

Tiger Woods Scandal: Powerful Men Woods affects how family men are perceived and thought about. Elled by Temptation Sex scandals -- they've ensnared presidents, religious leaders and premiere athletes who are supposed to epitomize American values and work ethic. But renowned sex anthropologist Helen Fisher said it's no coincidence that powerful men get caught in headline-grabbing scandals. Tiger Woods, now linked to three women who may have had affairs with the pro golfer, is the most recent addition to the list of men whose alleged indiscretions in the bedroom have been turned into tabloid fodder. null Tiger Woods' Deal With Gillette Won't Be Renewed PORTLAND, Ore. — Procter & Gamble Co. will not renew its endorsement deal with Tiger Woods at the end of the year, adding another name to the list of companies that cut ties with the golfer after last year's revelations of marital infidelities. The company used Woods, Roger Federer, Lionel Messi and dozens of other athletes as part of its three-year "Gillette Champions" marketing campaign. Gillette said Thursday it was phasing out that program and not renewing the contract with Woods and several other athletes. It stopped using Woods himself in the campaign months ago.

Tiger Woods and the economy Tiger Woods' affair resulted in a well-publicized car crash the day before Thanksgiving 2009. How did this impact the economy? According to research by two economics professors, it cost Tiger Woods' corporate sponsors $12 billion in lost stock value. Between November 25 and December 13, companies such as Gatorade, Nike and Electronic Arts stock prices fell 2.3%, costing shareholders $12 billion. industry experts optimistic that Tiger Woods's absence will have limited economic impact There have been a lot of gloomy predictions about the impact the Tiger Woods scandal, and his self-imposed hiatus, might have on America's annual $75 billion golf economy. Many industry experts say that fears are overblown, however, and they are optimistic that whatever impact is felt will be short-lived. His absence will be felt most by broadcasters.

Tiger Woods, Wife Elin Nordegren Woods: PRENUP Negotiations (PHOTOS) It did not take long after Tiger Woods issued a public apology for unspecified "transgressions" that rumors began to swirl about the financial negotiations between Woods and his wife, Elin Nordegren Woods. First, the Chicago Sun-Times reported that Woods was paying his wife "a hefty seven-figure amount" to stay with him. The article also said that a new prenuptial agreement is in the works. Today, Gerald Posner of the Daily Beast writes that Woods will likely soon pay his wife $5 million and that the prenup could ultimately fetch her $55 million after two years. Other financial dealings have been rumored as well.

Sportwriters affected. Things will be different for Tiger, but this scandal won't ruin his image So Tiger now admits to "transgressions." Plural. Whether that means both Rachel and Jaimee, or just multiple sessions with Jaimee, I don't know and I don't care. Gatorade Loses Its Thirst for Tiger Woods - Sex Scandals, Tiger Woods Sex Scandals By Catherine Donaldson-Evans 02/26/2010 at 06:25 PM EST Tiger Woods has been dumped again by a corporate sponsor, this time by Gatorade.

Golf is a game is where winning pays. The winner usually accpets a large amount of money. However, after the Tiger Woods scandal broke and him not playing in tournaments have forced the purse to lower. Tiger woods when playing in a tournament automatically raise the purse at least a milliion dollars. So other golfers are suffering for this as well. by parkerburnett005 Nov 17

Golf has a purse ammount that is awarded to winner of each individual tournament. The purse ammount can fluctuate depending on the importance of the event and players participating. When Tiger plays a tournament, the purse can increase significantly. One could see why other golfers would want him competing. His impact is felt throughout the sport when he is not playing. by adam.doyle Nov 16