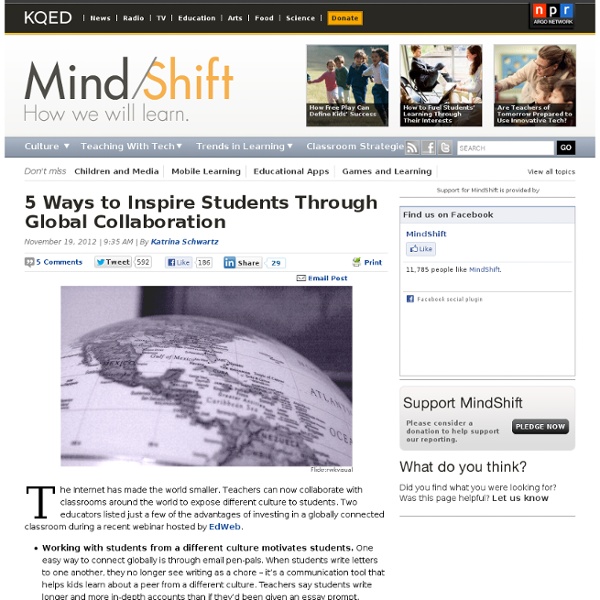 Culture Teaching Strategies Flickr:rwkvisual The Internet has made the world smaller. Teachers can now collaborate with classrooms around the world to expose different culture to students. Two educators listed just a few of the advantages of investing in a globally connected classroom during a recent webinar hosted by EdWeb. Working with students from a different culture motivates students. International pen pals may be the most straightforward global collaboration available. Epals is a free resource that allows educators to easily find other classrooms interested in collaborations. Related:  PYP RESOURCES

Around The World with 80 Schools 21 Images of Where Children Sleep Around the World Paints a Powerful Picture of Inequality "As a child, that's your little space within the house," said James Mollison, a Kenyan-born, England-raised, Venice-based photographer whose 2011 photo book, Where Children Sleep draws attention to a child's "material and cultural circumstances" and offers a remarkable view on class, poverty, and the diversity of children around the world. After spending more than three years traveling the world from Senegal to Tokyo, Mollison's series include portraits of children in front of a white background accompanied by a single snapshot of their bedrooms, leaving the later to speak volumes about their the social and cultural circumstances that contribute to their lifestyle. "I hope the book gives a a glimpse into the lives some children are living in very diverse situations around the world; a chance to reflect on the inequality that exists, and realize just how lucky most of us in the developed world are," said Mollison. Ryuta is a champion sumo wrestler and has been competing for seven years.

30 Magical Photos Of Children Playing Around The World No matter their cultural background, no matter their economic situation, kids will always find imaginative ways to have fun. Their wild imaginations and magical childhood moments, when captured on camera by talented photographers, can make for truly wonderful photos. These 33 images we collected will prove that childhood can be wonderful no matter where you go. Show Full Text Many in the Western world fear that technology is making today’s children lose touch with nature and with their own creativity, and while there are arguments to be made for the intellectual stimulation that apps and programs for children can bring, there’s also something to be said for simply playing with a stick in the mud or chasing dandelion seeds though an open meadow. For better or worse, the children in these photos seem entirely content making their own fun. Indonesia Thanks for sharing! 3x per week 30,000,000+ monthly readers Error sending email Image credits: Ipoenk Graphic Image credits: Agoes Antara Russia Peru

pypchat - home Teaching strategies Global education covers complex and controversial issues. This is a selection of teaching and learning approaches that develop knowledge and skills to respond to global issues. Freedom fighter or terrorist? Passionate or one-eyed? Passive resistance or civil uprising? The words used and our interpretation of images and statistics are an insight into our perspective or bias – our view of the world. Global education aims to assist students to recognise bias in written and visual texts, consider different points of view and make judgements about how bias can lead to discrimination and inequality. Activities to help students understand bias: Younger students might rewrite a well-known story from a different perspective – for example, Little Red Riding Hood rewritten from the perspective of the wolf. Cartoons are a great way to challenge thinking about an issue. Cartoons can be used in the global education classroom to: Activities Tell a story Interpret an issue Answer questions such as:

Two Ways to Explore the News Through Maps When teaching students about current events I have always tried to incorporate maps so that students can make a connection to the places that they are reading about. I do this if the story is about something happening in Africa or something happening twenty miles down the road from our community. Newspaper Map and the Breaking News map are both helpful in showing students the connections between story subjects and their corresponding locations. Newspaper Map is a neat tool for locating and reading newspapers from locations all around the world. Newspaper Map claims to have geolocated 10,000 newspapers. Breaking News presents a constant stream of headlines from around the world. Applications for Education A common assignment in social studies courses is to have students find, review, and share current events stories.

State of play: school playgrounds from Kenya to Japan | Art and design Paso Payita schoolAramasi, Chuquisaca, Bolivia, photographed 9 August 2011 Situated in a remote area on rough terrain 3,000m above sea level, the school has two teachers and 31 students aged from six to 12 years. Many students have to walk several miles to school. A road to the village was built only 15 years ago and there are no cars or buses. Most people are indigenous Quechua peasant farmers. Half of the students go on to secondary school, of whom half again go to university in Santa Cruz. Likoni school for the blindLikoni, Mombasa, Kenya, photographed 25 March 2011 This school has 166 students. The students go home to their villages for a visit every three months. Nativity SchoolSouth Central Los Angeles, US, photographed 10 November 2011 Founded by the Sisters of Loretto in 1924, this Catholic school has 330 students and is in a low-income area with a high crime rate. When I was 16, living in tranquil north Oxford in the UK, NWA released Straight Outta Compton.

Recycling around the world The UK government is trying to encourage more people to recycle their waste and reduce the UK's waste mountain. Figures suggest 60% of all household waste could be recycled or composted, but the largest nation in the UK, England, appears to be reusing only 17.7%. Here BBC correspondents provide a snapshot of how the UK's European neighbours and other countries approach recycling of everyday rubbish. SWITZERLAND: Imogen Foulkes Switzerland is proud of its recycling efforts, and with good reason. There are bottle banks at every supermarket, with separate slots for clear, green and brown glass. Then there is green waste. Aluminium and tin can be taken to local depots, batteries handed over at the supermarket, and old oil or other chemicals deposited at special sites. Plastic PET bottles are the most common drinks containers in Switzerland, and 80% of them are recycled - far higher than the European average of 20 to 40%. But the Swiss do not recycle just because they care about the environment.

Recycling for Kids These days it is recognised that it is important that children know how to help the environment by recycling, and schools do a really good job! Consequently children are often the instigators and policemen of recycling in the home. If they are not, are if you think the children you know need a little nudge in the right direction, you can find plenty of inspiration on our Recycling pages! Teach kids the three R's: Reduce - reduce the amount of things you buy and use and you will have less to throw awayReuse - keep using the same things as many times as you canRecycle - find new ways to use old things If you are doing a project on recycling or just want to get your children thinking about the... Help remind children to recycle, or designate your recycling stations, with these fun recycling... Have fun saving the "junk" around your house to use in our recycling crafts. If you enjoy origami, why not try these models which recycle newspaper and magazine pages into... You Might Also Enjoy Earth Day

Our Little Earth | Current events for kids; World news for kids East Meets West: An Infographic Portrait by Maria Popova German punctuality, Western ego and how to stand in line like a Chinese. What’s not to love about minimalist infographics — such an elegant way to depict complex concepts with brilliant simplicity. We also have a longtime love affair with social psychology, some of which deals with the fascinating cultural differences between Eastern and Western mentality — from the individualistic tendencies of the West versus the pluralism of Asian societies, to how differently Westerners and Easterners read the emotions of others. Born in China but living in Germany since she was 14, Liu has a unique grip of this cultural duality — and she channels it with great wit and eloquent minimalism in graphics that say so much by showing so little. Lifestyle: Independent vs. dependent Attitude towards punctuality Problem-solving approach Size of the individual's ego Perception: How Germans and the Chinese see one another How to stand in line Complexity of self-expression Donating = Loving

Rivers and Stories A book of river stories is, of course, an invitation to think about the relation between rivers and stories. It is also an occasion to think about the condition of the world's rivers, which we need urgently to do at this moment in the history of the human relation to the earth. And a place to begin is with the obvious, with the fact that most of the life on earth depends on fresh water. Human beings must first have used rivers for drinking and bathing and for food, fishing the shallows and hunting the birds and mammals drawn to the banks for water. And the rivers themselves have come to function as trace memories of what we have repressed in the name of our technical mastery. It's also a fact of the twentieth century that as a mode of travel, for commerce and pleasure, rivers have been largely displaced by highways, railways, and air travel. So, of course, they show up in poetry. Traveling in the world, even now, we confront, one way or another, the human history of rivers.

A Global View: The Adventure of Kid-Friendly Foreign Films Image credit: iStockphoto For many of us, Oscar week can serve as the annual reminder of how many great grown-up films we have yet to see, and how many kids' movies we've already seen -- over and over and over. Next time you're faced with indoor recess or a snow day, movie night or a free period before a holiday, resist the temptation to pop in Finding Nemo or Shrek (though I love these, too), and use the opportunity to take a journey around the world. Of all the great global learning tools out there, films from diverse countries are among of my very favorites. The Benefits of Active Viewing First and foremost, a good movie draws us in, and we simply enjoy the experience. Pre-screen movie trailers or short clips, easily accessible through YouTube or Vimeo, and archive your favorites to fill a gap on a rainy day or to weave into literature, social studies, music, art or science lessons. Don't shy away from subtitles, either. 6 Foreign Films for Every Classroom Ponyo (all ages)

Students Put Global Skills to Work This is the second of a two-part series about the Global Student Leaders Summit in Shanghai that brought together several hundred students from the United States and China in March. Developed by EF Educational Tours, the event offers teens an immersive experience in cross-cultural collaboration. Read about the global education themes that emerged at the summit in in my earlier post. The Global Student Leaders Summit brought together high school students from 26 U.S. states, 16 cities from across China, plus a smattering of other locations. Although participants traveled to Shanghai with classmates and teachers from their own schools, they were matched with new faces during the summit. From Massachusetts: A Head Start on "Glocal" Action Nine students -- all girls -- traveled to the summit from Cambridge Rindge and Latin High School, a public school in Cambridge, Massachusetts. Over a family-style dinner, chopsticks-wielding students shared these impressions: