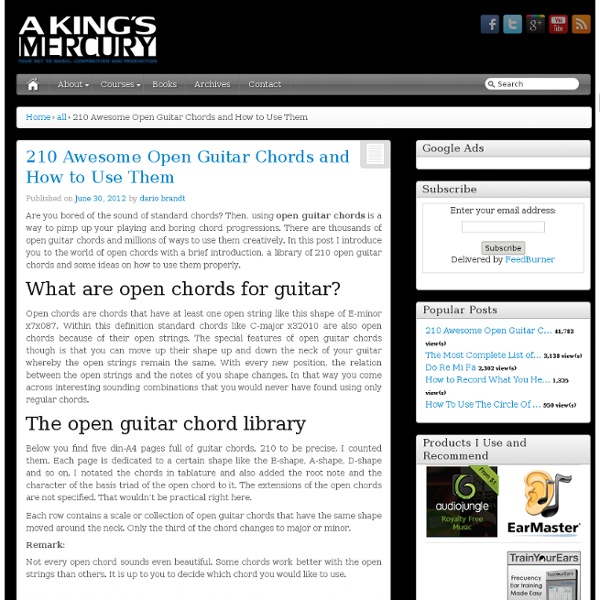 Are you bored of the sound of standard chords? Then, using open guitar chords is a way to pimp up your playing and boring chord progressions. There are thousands of open guitar chords and millions of ways to use them creatively. In this post I introduce you to the world of open chords with a brief introduction, a library of 210 open guitar chords and some ideas on how to use them properly. Open chords are chords that have at least one open string like this shape of E-minor x7x087. Below you find five din-A4 pages full of guitar chords. 210 to be precise, I counted them. Each row contains a scale or collection of open guitar chords that have the same shape moved around the neck. Remark: Not every open chord sounds even beautiful. Open E major scale: Here the basis shape of the E major chord is moved up and down the neck to form the E major scale in chords. Open D major scale: These open guitar chords have only one open string. A7-shape: A very nice sounding collection. Comments comments Related:  M THEORY • guitar

Kinderszenen op. 15, no. 1 The following animation presents a formal and harmonic analysis of the piece. Comments about the analysis are presented below. Comments about the analysis The piece is made using two contrasting phrases. The first phrase is based on two measures: The higher voice (in red) presents the main motive to be developed. The first two measures are repeated in measures 3 and 4: The next four measures of the phrase are a variation of the first two measures followed by two more measures that complete the phrase ending with an imperfect cadence: The second phrase has only six measures.

Guitar/Guitar Chords Song Library The following is a list of notable easy to learn guitar songs from the 1950s to the present. It also contains links to external websites containing different informal chords to songs which represent many different authors' own interpretations of the original songs. Most of the chords on the list are relatively easy to learn, and would be a great start for novice guitar players who are interested in improving their playing abilities. The technical difficulty and skill level required to play each of the songs is defined with a star rating system: - Easy Song - Intermediate Song - Difficult Song Basic Guitar Chord Patterns You will find 5 simple major chord styles on your guitar. also minor chord variation of those 5 basic patterns. You’ll discover that you will find chords that be seemingly missing such as for instance F chords and B chords in addition to chords with sharps or flats. for instance) you've to utilize a barre chord. site. The 5 Essential Major Chord Patterns basic guitar chords g

Levin LT-14 | Claescaster Levin LT-14 Made in Sweden in 1965 It has been an extremely good Christmas, not only did I manage to find a 1979 Fender Stratocaster, I also received a little Levin LT-14 from 1965. It’s the smallest of the 1960’s Levin guitars and is roughly like a Martin 00 in size. It’s the first time I get a 50 years old guitar home and I have to do nothing to it. Levin LT-14 / Goya T-14Grand Concert size: Body width: 360 mm, body length: 465 mm, body depth: 98 mm Fingerboard width: 43 mm, scale length: 630 mm Spruce top, mahogany back and sides, 4-ply bound top, single-bound back Mahogany bolt-on neck with adjustable truss rod Unbound rosewood fingerboard with bass side dot inlay Nickel plated individual Van Gent tuners with metal buttons Rosewood bridge, matte natural finish and one year warranty Now I actually have all three, the Levin LT-18, well it’s a Goya T-18 but close enough, my dad’s old Levin LT-16 and this new little Levin LT-14. Like this: Like Loading...

Denemo | Free and Open Music Notation Editor Electronic Music Theory: How to Quickly Write Better Chord Progressions w/ Pat Cupo A lot of students have asked me for tips and tricks to writing better chord progressions. By that time they had already learned about building Major and Minor chords, but when it came to a chord progression – a series of chords occurring in time – they were a bit stuck. If you’re ever in the same position, then feel free to use these simple guidelines to help you quickly write chord progressions. 1) Use only Major or Minor chords. Just keep things simple. C Major [audio: Major Chord C Minor [audio: Minor Chord 2) Begin and end with the same chord The thing about music is that it’s like a game. [audio: Minor Chord So what chord am I going to end with? 3) Move freely among diatonic chords The word Diatonic means “from the tonic”. [audio: Minor Scale Now to make things interesting.

Learn How to Write Songs Levin 163 | Claescaster Last Saturday Araceli and I had another gig with Chest Fever. We recently bought a Bill Lawrence A-300 pickup so Araceli could play her favourite little Tanglewood Premier TW133 guitar and I fitted my L.R. Baggs M1 in my 1968 Goya Model 163 and was very pleased with the result. A very early Goya Model 163, they were introduced in 1969 but the serial number puts this one to 1968. I thought I might as well post some images of the Goya 163 I received back in January. Goya Model 163, made in Sweden by Levin in 1968 I still haven’t found a good pickguard material. Update: March 21, 2014 The pickguard material I ordered from China looked a lot classier than expected so I cut in to shape and put it on Update: February 15, 2014 with my 3 new Levin guitars. I was back in Sweden over the weekend and I was really hoping to extend my Levin collection. 1963 Goya M-50 © Vintage Guitars 1970 Levin Model 174 © Vintage Guitars 1979 Levin W 32 J © Vintage Guitars

Free Music Writing, Music Notation Software - Finale Notepad Etude in Eb minor, Frédéric Chopin Dubussy excerpt - With Human Playback Dubussy excerpt - No Human Playback Enjoy Finale NotePad – for free – today Free Download View System Requirements Hear your notes as you enter them, then press Play to hear how they work together. But NotePad is more than just notes. Human Playback® Your music deserves to be heard with all the feeling, phrasing, and nuance you felt when you wrote it. High-quality software instrument sounds included NotePad includes more than 128 built-in software instrument sounds.

Music Theory for Songwriters - Home GuitarBob - Les leçons de gratte du Bob History of the Classical Guitar Music of the Renaissance for classical guitar (1536 to 1637) In 1501, in Venice, the printer Ottavio Petrucci was the first to use typography in the production of music. The pages were printed in three stages: first, the staves, then the notes and finally the text and the page numbers. In 1536, that is to say a hundred years after the appearance of printing in Europe, Don Luys Milán, a gentleman at the court of the king of Portugal and of the Islands, published in Valencia, under the title of El Maestro, a collection of music which contains instrumental pieces for vihuela, as well as songs with vihuela accompaniment. Round about 1570, the sonority and register of the guitar were increased with the addition of a fifth string. Baroque Music for classical guitar (1670 to 1750) In 1674, the Spaniard Gaspar Sanz published his "Instruccion de musica sobre la guitarra española". In France, in 1670, Francesco Corbetta printed in Paris "la guitarre Royalle". John W.

LilyPond – Music notation for everyone: LilyPond... music notation for everyone Species Counterpoint An Introduction to Species Counterpoint COUNTERPOINT may be briefly defined as the art of combining independent melodies. In figure 1 the lower melody is harmonized by one a third higher - such an arrangement of the voices could be regarded as counterpoint, but there is little or no independence between the parts; for example there is no dissonance between the voices, and both rise and fall together in parallel. However, the arrangement in figure 1a demonstrates much greater independence between its two voices, with movement in one part while the other halts, divergence in the melodic direction of the parts, and with at least some occurrence of dissonance. In a longer melody the voices could peak at different times - this would also emphasize their independence. J.J.Fux's Gradus Ad Parnassum is the classic text dealing with species counterpoint and fugue; it presents a set of rules for writing in the style of 16th century vocal composition (i.e. First Species An example from Gradus