10 Ways to Start Your Story Better 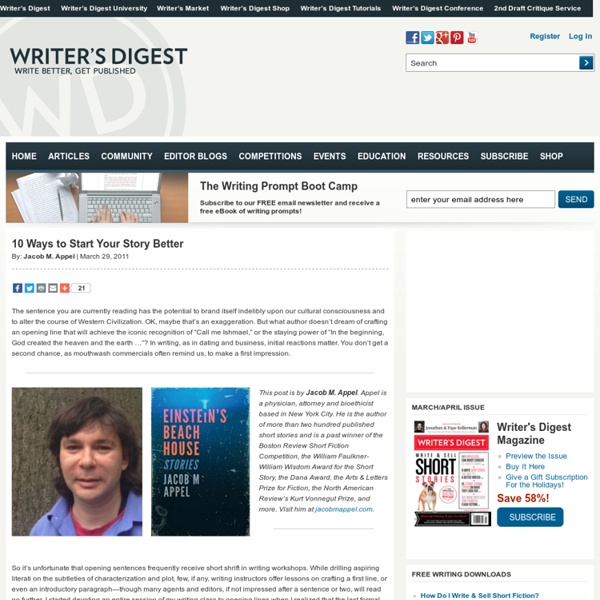 The sentence you are currently reading has the potential to brand itself indelibly upon our cultural consciousness and to alter the course of Western Civilization. OK, maybe that’s an exaggeration. But what author doesn’t dream of crafting an opening line that will achieve the iconic recognition of “Call me Ishmael,” or the staying power of “In the beginning, God created the heaven and the earth …”? In writing, as in dating and business, initial reactions matter. You don’t get a second chance, as mouthwash commercials often remind us, to make a first impression. This post is by Jacob M. So it’s unfortunate that opening sentences frequently receive short shrift in writing workshops. Think of every opening line you write as a pebble tossed down a mountainside: The stone may jolt back and forth within a limited path, building up force, but the trajectory of its initial release largely determines its subsequent route. Here are 10 ways to do it. 1. 2. 3. 4. 5. 6. 7. 8. 9. 10. Related:  dianemarycowan2 • to read

How Much of My World Do I Build? First, let me say that worldbuilding is an essential skill for every writer, regardless of genre. Not all writers need to concentrate on all areas of worldbuilding, but every writer must do some worldbuilding if he hopes to have a novel that is coherent, consistent, and real. Second, writers seem to come in three varieties — those who really have no idea what worldbuilding is or why they should bother with it; those who do know, but figure they’ll wing the details as they go; and those obsessive folks who secretly believe that they really can’t start the book until the whole planet is in place. I’ve spent time in all three camps — most of my time in the last one. The system works. Build only what you need; imply the rest. What do you need? A — Special physics It used to be that the only places where you might run into special physics were in SF and fantasy novels. If you require special physics, however, you must now answer the following questions. Special Physics — Matrin Magic On to step F.

Which Witchcraft: Choosing a Magic System for your Fantasy This is probably what comes to mind first when you think of picking a magic system, but I saved it for last to showcase the importance of other considerations. Simply put, how does magic work? And there's an infinite number of answers. This is the decision that most strongly impacts the general feel of your story. The problem, though, which I've realized as my first draft nears completion, is that this solid scientific system makes the magic feel very unmagical. I guess my deeply problematic magic system was partially a response to the one in Harry Potter, which I really don't like. So that's the gist of it.

How To Write a Death Scene | Writerly Life People often visit Creative Writing Corner searching for answers about how to write a death scene, so it’s about time that I gave my thoughts about it. I was first given the assignment to write a death scene as a stand-alone piece when I was a freshman in college, in my very first creative writing class. I chose to write a creative non-fiction piece about a relative of mine. For someone witnessing the death of a beloved person, the scene is not just about the way the person is going. After the jump: more things to do in a death scene. It’s very easy to get cheesy in a death scene, instantly robbing your story of its tenderness and emotion. What made people respond to my written piece and call it poignant weren’t the heavy-handed bits or the sweeping generalizations, but the details. These are a few tips for writing a death scene in your own story or novel.

How to Create a Believable Magic System | Atsiko's Chimney So, for the last two posts, I took a break from discussing magic to lay some basic groundwork on how stories function. To sum up: Stories are kept interesting through conflict and suspense. These are created through tension. Suspense is built through external “story” tension, and conflict is built through internal “character” tension. If you haven’t read those posts, I suggest you do. How do you create a believable magic system? The first step is to decide on your goals for the magic. Does it create suspense? Now that we’ve gone over choosing goals, maybe we should talk about how to achieve them. Know what your magic is and what it can do. Those are the basics, guys. Like this: Like Loading...

Creating a Realistic Fantasy World by Penny Ehrenkranz Did you ever wonder how David Eddings, Terry Brooks, Orson Scott Card, Stephen King, Piers Anthony, or J. R. R. Tolkien created their worlds? Creating your fantasy world means building a world based upon reality and making sure that your reader knows the rules of that world. J. How do you go about creating a reality that readers will accept as readily? Defining the Physical World Defining your locale can be a good place to start. Orson Scott Card began his fantasy novel, Hart's Hope, by designing a map. Instead of a map (or in addition to it), you may prefer to jot down descriptions of places you will need to use in your story. Defining the Rules of Magic Magic is often the key in fantasy. In Terry Brooks' Magic Kingdom of Landover series, wizards and witches have innate power. Your society will be structured around the question of who has magic and who doesn't. Piers Anthony's Apprentice Adept series offers are two parallel worlds. Defining a Consistent Reality

How to Create a Unique Magic System for Your Book: 6 Steps Edit Article Edited by Jonta, Maluniu, Grendle, Anonymo and 14 others Ever feel that books such as Harry Potter have taken all the good Magic set-ups in books? Ad Steps 1Remember that magic is distinguished from science by the measure of mystery in its elements. 6Write your book and remember to follow your own guidelines! Tips Use abstract thinking. Warnings Use care when borrowing ideas from others. Things You'll Need A source of informationImagination and a lot of time

How to Plot a Character Driven Book in 3 Easy Steps | Historical Romance Author Robyn DeHart, Legend Hunters , Ladies Amateur Sleuth Society Theme & Premise: Or How to Plot a Character Driven Book in 3 Easy Steps It is said that there are two types of writers: plotters and seat of the pants writers (or fly into the mist writers). Obviously the majority of us fall somewhere in between. I’m a serious plotter, one of those scene-by-scene plotters who knows primarily everything that will happen in the rough draft. Step 1 – THEME. To define your theme, you need to know what theme is, so what is theme? But how do you come up with a theme out of thin air, especially if you’re doing this with a book you haven’t even written yet? So now you have your theme, let’s move on to Step 2 – PREMISE/CHARACTER LESSON. This is the biggie for me when I’m doing my prewriting. Character lesson or premise is just what it sounds like: what does your character need to learn? Which brings me right into Step 3 – CHARACTER ARC. Now comes the plotting. That’s it. As for you plotters out there, I recommend using this from the very beginning.