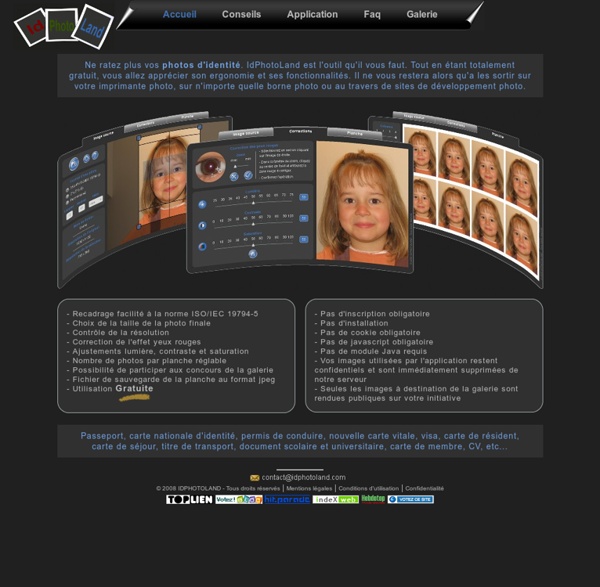 Pixel Spreadsheet Microscope image of an iPhone screen.It really is just a spreadsheet. Digital photographs are actually just spreadsheets. When you take a photo, your camera measures the amount of red, green and blue light hitting each pixel, ranks them on a scale from 0 to 255 and then records those values as a spreadsheet. Fotografix / l.madhavan What's New Try the new Fotografix Try the preview version of Fotografix 2 to see how image adjustments are easier with the new user interface and faster with the new graphics engine. Learn more and download Roozz brings Fotografix to the browser Roozz is a browser plugin that enables a number of applications, including Fotografix, to be run directly within your browser.

Label Maker Make a label! Note: some of the fonts are not very complete, generally just letters and numbers. Any characters not in the font will just get skipped. The Photo-Realistic Pastel Drawings of Ruben Belloso Adorna Ruben Belloso Adorna, a young artist from Seville, Spain, has taken the art world by storm with his incredibly detailed portraits of real-life and fictional characters drawn exclusively in pastel on wooden canvas. Painting hyper-realistic works of art with oil paints requires great talent and skill, but drawing them with pastel sticks and crayons seems almost impossible. It appears the word “impossible” is not in Ruben Belloso Adorna’s dictionary, as the young Spanish artist manages to create stunning photo-quality masterpieces using only pastels. Born in 1986, he studied Fine Arts at the University of Seville, and has already made a name for himself in the art world, participating in numerous solo and group exhibitions, and winning several awards. Looking at the quality of his colorful drawings, and the way he is able to bring out the emotions of his subjects, it’s easy to see why many are already calling Ruben a genius of the 21st century.

Online Photo Effects cookie barclose This website makes use of cookies to enhance browsing experience and provide additional functionality. None of this data can or will be used to identify or contact you. This website makes use of third party cookies, see the details in the privacy policy. This website makes use of tracking cookies, see the details in the privacy policy. PixBuilder Studio - Free photo editing software - WnSoft PixBuilder Studio allows you to use the following color management functions: brightness/contrast management, color balance, and levels manipulation. For professional results, you can use the curves function. In PixBuilder Studio, to carry out great, professional looking photo editing, you can manipulate the image with color channels. Layers concept, multi-step undo, gradients and masks support, and text layers support all make PixBuilder Studio a great graphics software program for image processing and creating illustration. You can also use flexible selection transform and management functions for drawing complex raster shapes and effects or use the built-in shapes drawing tool. For other complex goals, you can use the built-in high quality effects, such as different blur types, sharpen effects, and others.