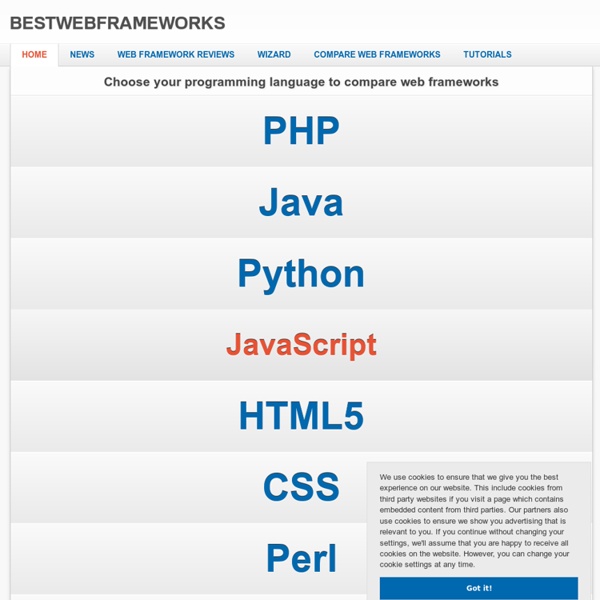 On Bestwebframeworks is it now possible to add web framework reviews, jobs, tutorials and quizzes without the need of a registration. Your could do now all the listed actions without an account but it's recommend to register one. Web frameworks usage To get an overview how often all the different web frameworks are used, BWF implemented an overview about the most used frameworks - with data based on the Stack Exchange API. Web framework benchmarks Another often wished implementation was the benchmark overview of frameworks which was added now.

Minizip: Zip and UnZip additionnal library Click to download Minizip (zip/unzip) package for zLib version 1.01h, with minor bugfixes, or, better, 1.1 (with zip64 support). This package enables to extract files from a .zip archive file. It is compatible with PKZip 2.04g, WinZip, InfoZip, MimarSinan Codex Suite 2002 tools, and compatible sofware. It runs both under Linux and Windows, and probably other systems too.

30 Best Eclipse Plugins PyDev - Python Development Environment for Eclipse Pydev is a plugin that enables users to use Eclipse for Python, Jython and Iron Python development, making Eclipse a first class Python IDE. EasyEclipse for LAMP EasyEclipse for LAMP is an Eclipse distribution to develop web applications with dynamic languages and provide support for PHP, Python, Perl, and Ruby and Ruby On Rail development with a web server and a database, CVS and Subversion. CFEclipse How To Build A Web App in Four Days For $10,000 (Say Hello To Matt) In this post, guest author Ryan Carson goes through some of the lessons learned from building a Web app in four days. Carson is the co-founder of Carsonified, a web shop in Bath, UK. They’ve built four web apps, created ThinkVitamin.com and run events like Future of Web Apps. If you’re bored you can follow Ryan on Twitter. The time it takes to design, build and deploy web applications has been steadily shrinking, especially with frameworks like Django, Rails and Symfony. With that in mind, we decided to push ourselves and attempt to launch a web app in 32 hours.

s BootCD 15.1 - All in one Bootable CD Antivirus Tools Avira AntiVir Personal Free anti-virus and anti-spyware on-demand scanner, detects and removes more than 50000 viruses and trojans. ComboFix Designed to cleanup malware infections and restore settings modified by malware. Cloakware Security Overview It is more critical and difficult than ever for pay TV operators, OTT service providers and content owners to protect their valuable media assets and investments against emerging threats as the impact on their business is often global and immediate. Irdeto provides operators, OTT service providers and content owners with robust defense against the ever-changing threat of piracy.

Damn Cool Algorithms, Part 1: BK-Trees Posted by Nick Johnson | Filed under coding, tech, damn-cool-algorithms This is the first post in (hopefully) a series of posts on Damn Cool Algorithms - essentially, any algorithm I think is really Damn Cool, particularly if it's simple but non-obvious. BK-Trees, or Burkhard-Keller Trees are a tree-based data structure engineered for quickly finding near-matches to a string, for example, as used by a spelling checker, or when doing a 'fuzzy' search for a term.

Chapter 1: Introduction to Django This book is about Django, a Web development framework that saves you time and makes Web development a joy. Using Django, you can build and maintain high-quality Web applications with minimal fuss. At its best, Web development is an exciting, creative act; at its worst, it can be a repetitive, frustrating nuisance. Django lets you focus on the fun stuff – the crux of your Web application – while easing the pain of the repetitive bits. In doing so, it provides high-level abstractions of common Web development patterns, shortcuts for frequent programming tasks, and clear conventions for how to solve problems. At the same time, Django tries to stay out of your way, letting you work outside the scope of the framework as needed.

10 Resources for Design-Challenged Programmers When it comes to design, why do programmers tend to have difficulty in creating a simple and user-friendly user interface? Perhaps because programmers are traditionally left-brained and more focused on logic, analytics, objectivity, etc. This type of thinking is encouraged in academics. Designers are right-brained and focus on being intuitive, creative and subjective.

Tilt Project Page Tilt is a 3D, WebGL-based web-page visualization tool. Unlike traditional web-page inspectors, Tilt allows a person to instantly see the relationship between various parts of a web-page and their ancestors in a fun and graphical way. How it works When you first start Tilt on a webpage, it builds an internal representation of the DOM. 45 Free Online Computer Science Courses Missed lectures or hate teachers? Or want to study computer science courses without going to university? … You can study anytime anywhere because there are number of free online computer science courses available on internet that are very interactive. Here is the list of 45 free online computer science courses that are designed by teaching experts from best universities of the world (almost the whole graduation!).

Get Started With Django Django is a web framework designed to help you build complex web applications simply and quickly. It’s written in the Python programming language. Django takes it name from the early jazz guitarist Django Reinhardt, a gypsy savant who managed to play dazzling and electrifying runs on his instrument even though two of the fingers on his left hand were paralyzed in an accident when he was young. RFC: Simple Internet Question Asking Protocol (for human beings) This is my attempt version 0.1 to teach the world how one should ask questions in the simplest possible way in Internet discussion. To make it simple, I try to keep this short. This post sprouts from my frustration from the lack of people’s ability to form questions one could easily answer. 1. Assumptions If you want to ask a question in forum, IRC (chat) or mailing list

How to recognise a good programmer It’s not as easy as it sounds. CV experience is only of limited use here, because great programmers don’t always have the “official” experience to demonstrate that they’re great. In fact, a lot of that CV experience can be misleading. Yet there are a number of subtle cues that you can get, even from the CV, to figure out whether someone’s a great programmer. I consider myself to be a pretty good programmer. At the same time, I’ve spent a fair amount of time on the business side of the fence, filtering technical CVs for projects, interviewing people, etc.