How Can I Turn My Mess of Ideas Into Something Organized and Useful? 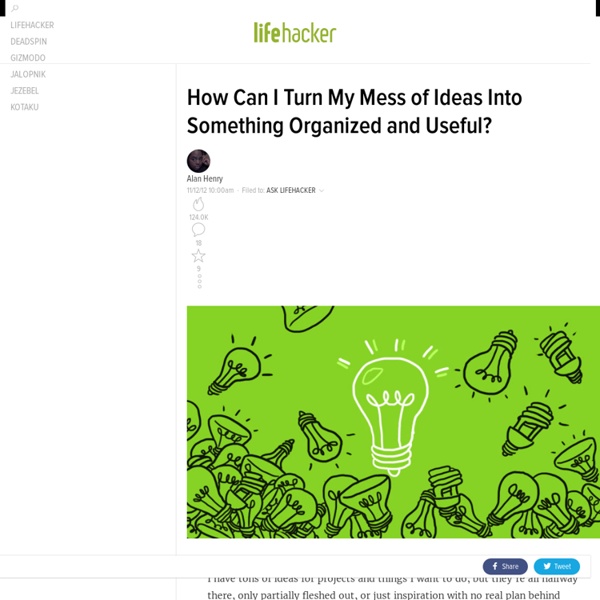 I would argue that a huge way to manage having a confusing mess of ideas is to segment them and then actually do them. I've been podcasting for a year, and writing for much longer than that. But only recently have I figured out how to untangle the mess of concepts and goals that exists in my brain. Too many times, I talk to people who are creatively charged and hear that they're working on a book, a movie, a tv show, a comic, a web series, a podcast, and a blog.........but they're "still sort of planning how to do them." Meaning they're doing absolutely nothing. I have done and still do the same thing. If your laser is too broad, focus it down to the one project that you're immediately interested in doing, and what is most practical. i.e, leave your web series on the back-burner while you start up your podcast. The best way to turn your mess of ideas into something organized and useful is to do some light categorizing, and then actually start using them.

How to Snap Top Secret Photos Without Anyone Noticing So I'm curious now as to what the creep is doing? Also, if it has a lot to do with what just what he/she is saying and you want to be covert, I would just prepare your mobile phone (already associated with you and probably on you already) with an audio recording app, ideally one that has a voice activation feature (would still take a second to prep though, as you wouldn't want it running all day — you could say, "before you begin the creepiness, let me finish this text" or something to get it going). :-).

9 Free Conference Calling Services Businesses often need to get together to collaborate. That means you occasionally need to hold conference calls with clients, customers, and employees. Your existing phone service might have a “conference call” feature – but that probably only lets three people on the line at once. Every so often, you need more than that. Murder Your Worst Habits By Doing This Old habits die hard. Which means if you want to kick butt and knock those bad habits out cold, you need some serious ammunition. Yup, it’s buh bye bad habits and hello new life. Or in the words of Die Hard hero John McClane (Bruce Willis): “Welcome to the party, pal.” What’s Your Poison?

25 Best Movies About Education Ever Made When it comes to education, it seems as though there are always interesting issues to discuss. Issues of inequality, teacher pay, and other hot button subjects are always being tackled. This happens in real life, of course, but it also happens in the movies. In some cases, a movie can make what goes on in real life more poignant. This is especially true if you are dealing with a documentary. Bouncy Curled Under This is one of my favorite ways to style my hair, especially when it's at it's awkward stage. It's not really on my shoulders, it's not really above my shoulders. . .so I need a very loose and bouncy style so it can go where it wants to! All you'll need is hairspray, duckbill/alligator clips, a comb, and a flat iron. I sprayed a generous amount of Aquage Uplifting foam at my roots, then blew dry upside down. My hair was washed with Redken Body Full and conditioned with Redken Extreme Conditioner. This can be done on any length of hair, but the shorter the easier.

- StumbleUpon Lilach Lilach is the founder and driving force behind Socialable, and highly regarded on the world speaker circuit. Forbes and Number 10 Downing Street have even been graced by her presence! In a nutshell, she’s a hugely connected and highly influential serial entrepreneur – the embodiment of Digitelligence.Listed in Forbes as one of the top 20 women social media power influencers and likewise as one of the top social media power influencers, she is one of the most dynamic personalities in the social media market, she actively leverages ethical online marketing for her clients and for Socialable. After launching her first business within three years of becoming a mother, her financial success was recognised by being a finalist at the Best MumPreneur of the Year Awards, presented at 10 Downing Street. When Lilach isn’t working she enjoys spending time with her family and is an avid fan of Zumba.

Biographical Dictionary of Popular Music Getting musical input from someone you don’t know is a bit like asking the Internet what you should eat for dinner. You’ll get an answer, sure, but there’s no telling how it will fit in with your personal taste. Unless, of course, the person you’re getting said music information from happens to be Dylan Jones, the editor in chief of British GQ who has won countless awards, writes for other publications and happens to have written a few other books about music. His newest, the Biographical Dictionary of Popular Music, is also one of his most ambitious. It’s an A to Z reference of Jones’s thoughts on what he considers to be 350 of the most important artists from around the world.

Metaphorical Magic in Speech Metaphors help a skeptical or apathetic audience better embrace and value a new concept or idea. Metaphors make the connection of that new idea to an object the audience already knows. Read on to discover a treasure chest of metaphor speech examples. The dictionary defines a metaphor as an implied comparison between two unlike things (e.g. human body and garage) that actually have something important in common (e.g. storage).

Weighing Security Against Convenience: What Works, What Doesn't, and What's Best for You It pleases me that my notions about the security of passwords are at par with industry experts, while I'm pretty much just the average bloke. This article prompted me to audit my own passwords along the same lines, and I concluded that my style of securing my accounts is taking the middle path when faced with the options of security and convenience. I use a random string as my base password, and then append multiple phrases to it. Now these phrases are something that link to the that particular service account, but the link is so remote, to a fair extent it may be assumed that only I can actually arrive at the phrase, given the service, and to a foreign person, it may seem a to be just a random phrase.

Awakening to Your Life’s Purpose – 7-Week Course Introducing A Proven, Time-Tested Path for Discovering and Actualizing What You Were Meant to Do in This Lifetime— Even if You Think It’s Too “Late” to Really Live a Life Overflowing with Passion and Purpose After five decades of working with world leaders and change-makers, Dr. Jean Houston, a principal founder of the human potential movement, reveals her uniquely transformative process for finding and living your life purpose. It doesn’t matter if you’ve gotten stuck… if you feel alone in your desire to make a difference… if every force in the universe seems to be acting against you… or if truly living a life of meaning and purpose just seems “unrealistic.”

Craft the Perfect Keychain This Weekend Doesn't that increase the difficulty of turning them? Just curious, not being critical. The plastic hinge ends of that flash drive broke in my pocket after I used the drive once...has yours held up better? Yeah sure, but now it's harder to hold them and turn them. Meaning of Personal Selling or Salesmanship Meaning of personal selling or salesmanship Personal selling or salesmanship is the oldest and the most popular method of selling goods and services. It involves face-to-face communication between the seller and the potential buyer. It may be two types : (i) Across the Counter Selling: In this case, the customer comes to the shop or store and the salesperson attends him.

30 Ways To Live A Life Of Excellence post written by: Marc Chernoff Email 30 Ways To Live A Life Of Excellence was written by Celestine. I’ve always been passionate about living a life of excellence. Setting goals, overcoming challenges, getting results, celebrating the victories - these make living so rich and worthwhile. When I was in college I was on the Dean’s List - an honorary roll awarded only to top students - in every academic year I was there.

Related:
Related:  Currently Looking Into   -  Business & Etc.   -  currently reading   -  I am looking for a place, for my mind   -  Caught Looking Good   -  looking for job   -  stoptherobbery.com   -  Binaural Beats « Get High Now (without drugs)   -  Feeling Bored and Undereducated? Try Any of These 400 Free Online Courses! | Geekosystem   -  Awesome Rooms « JinSpiration   -  Why You Should Be Using an App Launcher (and How to Make It Do More Than Launch Apps)   -  Writing a CV/résumé   -  How to Develop Sherlock Holmes-Like Powers of Observation and Deduction