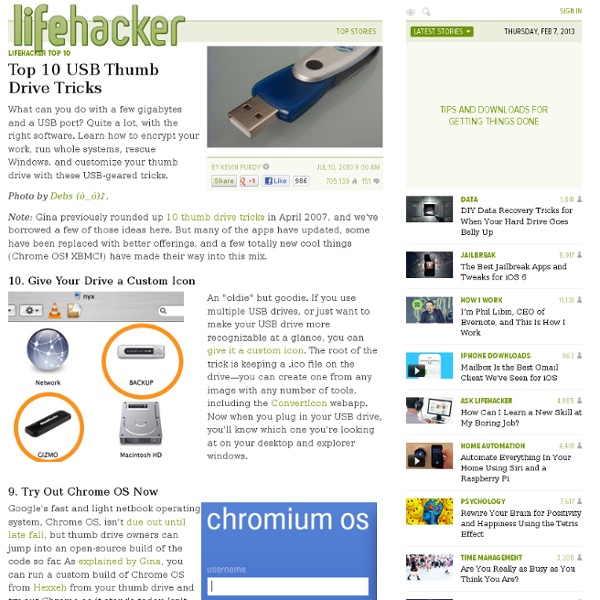 SExpand What can you do with a few gigabytes and a USB port? Quite a lot, with the right software. Learn how to encrypt your work, run whole systems, rescue Windows, and customize your thumb drive with these USB-geared tricks. Photo by Debs (ò‿ó)♪. Note: Gina previously rounded up 10 thumb drive tricks in April 2007, and we've borrowed a few of those ideas here.

32 Useful Portable Apps For Web Designers and Developers We like portable apps because those applications are lightweight and require no installation to run. As a web designer/developer, i used to work with different PCs. Rather than carrying my laptop everywhere, i prefer saving frequently used applications into my USB drive. I had collect a lot of useful portable applications and i would like to share those applications with my readers. Top10 - Gadgets for your bag My opinion is that while most of these things can be useful, they are not the kind of things to carry around at all times, here's what I think.. 10. Cable shorteners, maybe I should give it a try.

Aetrex GPS shoes « ΚΑFΕΝΕΙΟ A number of my friends have elderly parents afflicted by dementia or Alzheimer’s. In the early stages, when people are still reasonably functional and still managing at home with a caregiver (often the other non-afflicted spouse), one of the biggest problems is making sure they don’t wander off. One of my friends’ dad used to get dressed and leave the house in the middle of the night. Luckily, the police would bring him home. Putting special locks on the door is rarely an option, since you then run the risk that they can’t get out in an emergency.

Complete Guide to Saving Your Windows System with a Thumb Drive @timgray: LMAO linux is easier to use than windows? LOLOLOLOLOLOLOLOLOLOLOLOL.......LOLOLOL. And yes the source code is openly available....Idiot Linux Threats The following is a partial list of known LINUX malware. Known malware is not the only or even the most important threat: new malware or attacks directed to specific sites can use vulnerabilities not previously known to the community or not previously used by malware. HowTo - Back-Up Your Computer For Linux, there is Back-In-Time which uses the standard Linux filesystem hardlink capability to store multiple versions in a non-duplicate efficient manner. Unfortunately, none of the data is compressed and if large media files are not excluded (think 5GB videos), then you will quickly run out of backup storage. OTOH, it is bonehead simple and just works. Mom is very happen - ok, Mom doesn't know anything about it. There are Gnome and KDE specific versions of B-I-T. [backintime.le-web.org] Chances are that your distro repo has it, so installation is trivial.

Atlas endures…for now This is my column in this month’s Emergency Medicine News. In Medicine, Atlas endures. For now… Most modern American are familiar with the classic political novel, Atlas Shrugged. How to turn an old PC into a media centre There are a scary number of ways of playing back your library of movies and music through a TV screen. You can stream them over the LAN via a games console, play them directly from the cloud on an Internet ready TV or simply hook up your laptop via an HDMI cable. You can even play directly off of your iPod. Many go down the route of least resistance and opt for a do-it-all entertainment on demand set-top box, such as Sky+ or BT Vision, paying a monthly subscription so they never have to get their hands the slightest bit dirty with an extra cable or two. Nothing, however, has yet displaced building your own media centre to sit at the side of your TV as the ultimate symbol of home hackery.