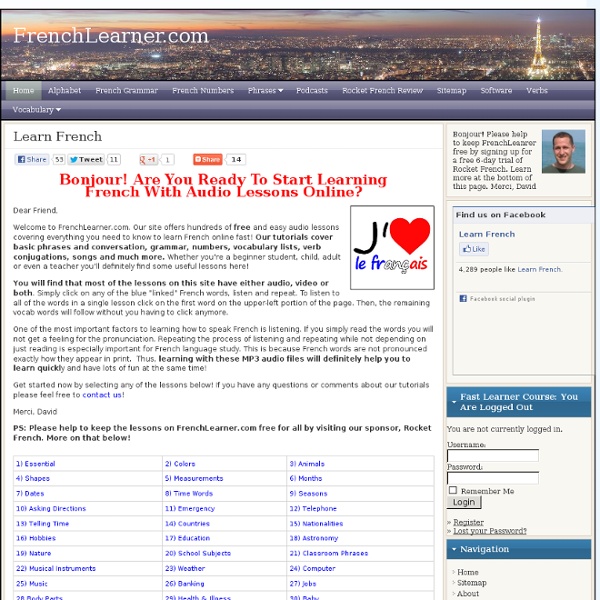 French Language Resources The Pimsleur Approach is so effective, that you'll learn French very quickly. In fact, you may find yourself so amazed and pleased with your newfound abilities, you'll be motivated to delve more deeply into the language. That's why we are offering additional free French language resources to you. If you are passionate about augmenting your French language studies, you will find these resources very helpful. They include essential vocabulary lists, fun quizzes, interesting articles, in-depth lesson plans for teachers, and much more to supplement your language program. French Lesson Plans Our comprehensive lesson plans were written by teachers, for teachers. View our French Lesson Plans Games for Learning French Focus on fun! Play our French language games here Do you know of a resource that should be added to this list?

Because it's French: What do you really know about French people? Learn French online French Travel Phrases | Language for Travelers Bienvenue! Welcome to the Fodor's French Language Page, brought to you by the language experts at Living Language. Here you'll find over 150 essential phrases for your trip. For more French language and cultural tips, visit the Living Language French Blog. General French is spoken as a native language by about 65 million people. Pronunciation French vowels often have accents, and those accents usually affect pronunciation. Other accents and special symbols in French are: the accent circonflexe – â, the cedille – ç, the tréma – ï, and the œ (called e dans l'o, literally e in the o, in French). Nasal vowels are also important in French. Also keep in mind that although final consonants often aren't pronounced in French, they sometimes are when the following word begins with a vowel or silent h. Vocabulary A lot of basic French vocabulary will look familiar to you: le restaurant (restaurant), la table (table), l'âge (age), le fruit (fruit), l'hôtel (hotel), l'animal (animal), and so on. Grammar

Learning French online (Free online French courses) French Accents - Diacritical Marks Used in French There are four French accents for vowels and one accent for a consonant. For specific information on what the accents do to change the pronunciation of the letters they modify, please see the appropriate letter pages. The accent aigu ´ (acute accent) can only be on an E. At the beginning of a word, it often indicates that an S used to follow that vowel, e.g., étudiant (student). The accent grave ` (grave accent) can be found on an A, E, or U. The accent circonflexe ˆ (circumflex) can be on an A, E, I, O, or U. The accent tréma ¨ (dieresis or umlaut) can be on an E, I, or U. The cédille ¸ (cedilla) is found only on the letter C. It is essential to put accents in their proper places - an incorrect or missing accent is a spelling mistake just as an incorrect or missing letter would be.

Topic:French French is spoken all around the world. French (français, fʁɑ̃sɛ) is spoken around the world by between 72 and 130 million people as a native language, and by between 190 and 600 million people as a second language, with significant populations of speakers in 54 countries. Most native speakers of the language live in France, where the language originated. The rest live in Canada, Belgium, or one of the other 54 countries in which it is spoken. French is a descendant of the Latin language of the Roman Empire, as are languages such as Portuguese, Spanish, Italian, Catalan and Romanian. Its development was also influenced by the native Celtic languages of Roman Gaul and by the Germanic language of the post-Roman Frankish invaders. It is an official language in 31 countries, most of which form what is called in French "La Francophonie": the community of French-speaking nations.

French Phrases and Common Sentences French Phrases Here you can either watch the French phrases in this video or read them as text in the table below: French Phrases ۞ To Save this Page Press (CTRL D) or E-mail this Page! I hope the content of this page was useful to you, and that you learned some French phrases, expressions and words. How to Speak French First look at why you're learning French and how much time you have. If it's for a vacation in France, a few key phrases you study for ten minutes a day may suffice. Even knowing just a few words will help you communicate, and understand what others are saying to you. To speak, read, or write on a higher level, lessons with audio and written elements are necessary. French Pronunciation Tips French uses liason, where words slide into each other and letters are sometimes elided Though you generally do not pronounce the consonants at the end of French words, as with everything in life, there are exceptions: LanguageGuide.org has ordered words into those with silent ends, and those whose final letters are pronounced.2 Click on the speaker buttons to hear how different words should be pronounced.2For more pronunciation tips, see the IE Languages pronunciation guide.3