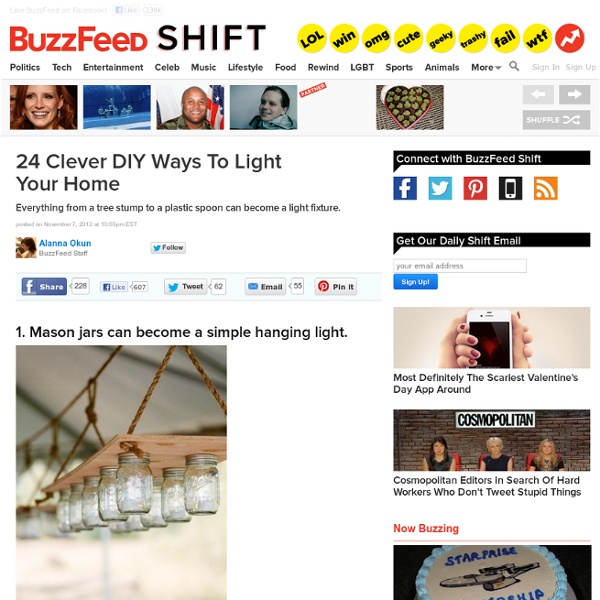 The Easiest Pillow Cover Ever This is the easiest pillow cover ever. No measuring! No sewing! Just fold and tie. You need a piece of fabric 3 times as wide plus a few more inches and twice as tall plus a few more inches as the pillow. Place the pillow in the center, on the wrong side of the fabric. I used pinking shears to cut the fabric so it wouldn’t fray. Then fold the top down to the center. Fold both ends like the picture. Bring one side over the top of the pillow. Then the other side. Now tie the ends in a square knot. Ta-Da! I love the knot. And it looks great on the loveseat. It even looks great on the back if I want to switch sides. I’m linking to these awesome blog parties:

DIY Yarn Light I am not sure on the source for this photo, sorry! I love the look of the light fixture in the photo above, but I am pretty sure it would cost me over 3 months of morgage payments! Then I saw this idea over here at Pickles and it has been on my craft list ever since. There are not many ceiling fixtures in our old house and the ones we do have are ceiling fans. One of those ceiling fans is in Gray's room and thought I was out of luck at trying to do anything somewhat cool to it, because the fan is very practical on hot summer days! But then I saw this over at House Tweaking- and immediately thought of the yarn light off my craft to do list- so I combined the two ideas into one! DIY Yarn Light What you'll need: A medium sized beach ball- I found one at Walmart for $3.95 Base to sit the ball on- I used a small bowl Vaseline Ball of Yarn Large bowl 2 bottles of white glue 1 cup of corn starch 1/2 cup of water Lots of newspaper Clear spray paint/adhesive 1. 2. 3. 4. 5. 6. 7. Linking up over here:

Before &amp; After: An $80 Rental Kitchen Makeover BEFORE: Particleboard cabinets, dingy backsplash, colorless. My husband and I moved into our current rental apartment one year ago, and while we loved the fact that the kitchen was separate, roomy and had stainless steel appliances, we were underwhelmed by the cheap particleboard cupboards, dingy and warped linoleum floors, and ugly countertops. So, with limited options (our landlord won't let us paint and we can't replace anything) and resources, I set out to make it brighter and warmer. See the After photos below. The biggest changes I made were taking off the upper cupboard doors and putting up pretty paper from Kate's Paperie ($24 = about 6 sheets at $4 a sheet). I already had a number of unused frames I'd bought at IKEA a long time ago, and I pulled food photos I liked from books and magazines (like the now-defunct Gourmet) to frame and use as a semi-backsplash. The bottom cabinets (*blush) The $80 I Spent: Images: Cambria Bold

31 Household Products You'll Never Have To Buy Again DIY: Yarn Ball Decor | Weddings Illustrated This yarn ball DIY comes to us from Ruche , a vintage-inspired clothing boutique. They had originally used the spheres as a background for one of their winter lookbooks, but the yarn balls could easily be converted to wedding decor. The final products could be hung as interesting light fixtures or used as whimsical centerpieces. Materials : Balloons School glue Scissors Yarn Steps: 1. 2. 3. 4. 5. Here is a sample of the spheres used as chandeliers: Source: Pinterest

Revisiting the Mastery of Mexican Photographer Manuel lvarez Bravo Often cited as Mexico’s most celebrated fine art photographer, Manuel Álvarez Bravo, whose life almost spanned the entire 20th century, relentlessly captured the history of the country’s evolving social and geopolitical atmosphere. A Photographer on the Watch, a new show organized by the Jeu de Paume in Paris, features previously unpublished and unseen images from the master alongside Álvarez Bravo’s most recognizable images, such as The Daughter of the Dancers (slide 6) and The Crouched Ones (slide 9). Together, they bring new attention and reconsideration of the work of the photographer—who died in 2002—whose prolific output has not only been thoroughly scrutinized by critics, but also published in more than a hundred books and exhibited internationally (The J. Paul Getty Museum in Los Angeles staged a major retrospective in 2001). Manuel Álvarez Bravo: A Photographer on the Watch is on view from Oct. 16 through Jan. 20 at Jeu de Paume in Paris.

How to Make Dairy Free Ice Cream - Vegan Dessert Recipes It's always more fun to DIY. Every week, we'll spare you a trip to the grocery store and show you how to make small batches of great foods at home. Today: Ashley McLaughlin from Edible Perspective's homemade coconut milk ice cream will change the way you think about vegan ice cream forever -- and that's a fact. Thick, creamy, lightly sweetened ice cream is one of my all-time favorite desserts, and when choosing a flavor, I almost always pick vanilla. For this recipe, I’ve used full-fat coconut milk instead of heavy cream to make a dairy-free, vegan version. Make this recipe as is (or throw in your favorite mix-ins) and you’ll be a happy ice cream eater. More: Here are all of the recipes you need to build the perfect ice cream sundae. Vegan Vanilla Bean Coconut Milk Ice Cream Serves 6 to 8 1 or 2 vanilla beans2 cans full-fat coconut milk1 tablespoon arrowroot starch1/3 cup brown rice syrup, or coconut nectar1/3 cup pure cane sugar1 1/2 tablespoons vodka Photos by Ashley McLaughlin

Wine Bottle Design | Recycled Wine Bottle Torch | Package Design Firm | Sustainable Packaging 08.09.09 | by Erik Anderson Whether it’s product branding, package design or projects for ourselves, we’re pleased when we find a solution that’s very effective and creative, while keeping resources to a minimum. This idea is very inexpensive idea and it’s a great way to recycle a wine bottle. See how this simple idea inspired this brand and wine bottle design. It’s been a record year for mosquitoes here in Indianapolis, Indiana and I’d been wanting to add some Tiki-esque torches to the patio to combat the little buggers, and add a little ambiance. Here’s what you’ll need. Empty Wine Bottle (Use any bottle as long as it’s glass and the neck is 1” in diameter. Helpful Tools: Channellocks, adjustable wrench, hacksaw, power screwdriver, and a funnel. Safety Note: This is for outdoor use only. Building Instructions The Hanger Decide where you want to mount your Recycled Bottle Torch. The Bottle Carefully and tightly wrap the 1/2-inch end of the Coupling with your Teflon Tape. Good Luck! -Erik

Eberle Brothers you never heard of. Whenever there's news coming out of Norther Virginia, such as the current kerfuffle over Republican Eric Cantor's wife's affiliation with a bank that been accused by the Virginia State Attorney of fraud, I'm reminded of Bruce W. Eberle, founder of Eberle Associates, a direct mail enterprise that's morphed into political/charitable and online solicitation, where fraud is not a problem, because the solicitors don't promise to deliver anything for the money they collect. The extent to which Bruce's outfit relies on lists of email addresses to generate income is not known. Also not know for certain is whether Bobby Eberle in Texas, the founder of GOPUSA, the fundraising arm of the Republican party and former employer of the infamous Guckert at Talon News are actually related as brothers. What is known is that they are in a fraternity that collects addresses for the purpose of collecting money, mostly from naive and easily deceived people. Michael New is not a troublemaker.

How to cut glass I posted a picture about 1 week ago on Instagram, Facebook and Twitter of me cutting glass using just string. I got LOT’S of requests for a tutorial on how I DID THIS! So here it is. FINALLY! You will be able to learn how to cut glass. I want to warn you. It’s best to triple your yarn because it will burn longer! Soak it GOOD! I like to tie my yarn where I want my glass to “cut” then quickly pour polish remover over the string again. Get a big bowl with ice and water ready. VERY IMPORTANT! Slowly turn your bottle. You can’t let the flame go OUT then dunk it in the ice water. YAY!!! I reallly hope you enjoyed this tutorial because I had ALOT of requests for it! © Copyright jaderbombllc, All rights Reserved.

Outsourcing Troubled Kids: D.C.&#39;s Addiction to Residential Treatment Centers Jumiya Crump was on the run. It was close to 9:30 p.m. on July 1, 2009. “I just left,” she blurted into the phone. So Jumiya, 16, started walking. “I have nothing but the clothes on my back,” she had said, her voice flickering in and out. Hours earlier, Metropolitan Police Department officers had taken Jumiya to the Southwest headquarters of the D.C. Jumiya had come into the system as a victim, not a criminal. advertisement Subsequent statements from Jumiya, her four-year-old brother, and her grandmother accused Jumiya’s mother of doing the damage. The District’s safety net had caught Jumiya, but now it had to parent her. That night wasn’t Jumiya’s first escape. The next morning, Jumiya looked the part in old jeans and a T-shirt, her skinny braids loosened into a wild frizz. Jumiya should have been a routine case. What Jumiya was finding so oppressive was a child-treatment approach that government agencies across the country have been turning away from during the past 15 years.