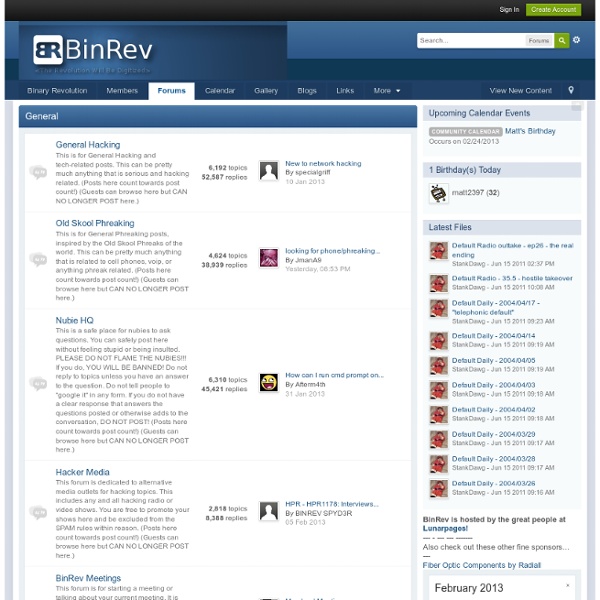 The War On Cyber CyberTerrorists - The War On Cyber: CyberTerrorists - The War On Cyber Join us now to get access to all our features. Once registered and logged in, you will be able to create topics, post replies to existing threads, give reputation to your fellow members, get your own private messenger, and so, so much more. Subscribe to topics and forums to get automatic updates Malicious Linux Commands - From (This article was originally published in Ubuntu Forums but was removed there. Ubuntuguide feels that knowledge about these risks is more important than any misguided attempts to "protect the public" by hiding their potential dangers or protect the (K)Ubuntu/Linux image.

Infinity Exists I Got My Computer Back! June 4th, 2009 by Patchy It’s been several years,… but finally Patchy and his computer are reunited at last Download Here Posted in News, Vblog | Essential Wireless Hacking Tools By Daniel V. Hoffman, CISSP, CWNA, CEH Anyone interested in gaining a deeper knowledge of wireless security and exploiting vulnerabilities will need a good set of base tools with which to work. Fortunately, there are an abundance of free tools available on the Internet. This list is not meant to be comprehensive in nature but rather to provide some general guidance on recommended tools to build your toolkit. Google Dorks cache: If you include other words in the query, Google will highlight those words within the cached document. For instance, [cache:www.google.com web] will show the cached content with the word “web” highlighted. This functionality is also accessible by clicking on the “Cached” link on Google’s main results page. The query [cache:] will show the version of the web page that Google has in its cache. For instance, [cache:www.google.com] will show Google’s cache of the Google homepage.

Google hacking Basics[edit] The following search query will locate all websites that have the words "admbook" and "version" in the title of the website. It also checks to ensure that the web page being accessed is a PHP file. intitle:admbook intitle:version filetype:php One can even retrieve the username and password list from Microsoft FrontPage servers by inputting the given microscript in Google search field:

Password crackers SecTools.Org: Top 125 Network Security Tools For more than a decade, the Nmap Project has been cataloguing the network security community's favorite tools. In 2011 this site became much more dynamic, offering ratings, reviews, searching, sorting, and a new tool suggestion form . This site allows open source and commercial tools on any platform, except those tools that we maintain (such as the Nmap Security Scanner , Ncat network connector , and Nping packet manipulator ). We're very impressed by the collective smarts of the security community and we highly recommend reading the whole list and investigating any tools you are unfamiliar with. Short Film of the Day: Stuxnet: Anatomy of a Computer Virus Why Watch? Because we should challenge how we define a film. Most of the shorts featured in this column are either easy to spot as stories or completely experimental. Even when a documentary short is in the spotlight, it tells a clear tale of people doing things. This short, is none of those things. Stuxnet: Anatomy of a Computer Virus is an informational film made entirely of voice over narration and motion graphics.

Firesheep - Wikipedia, the free encyclopedia - StumbleUpon The extension was created as a demonstration of the security risk of session hijacking vulnerabilities to users of web sites that only encrypt the login process and not the cookie(s) created during the login process.[3] It has been warned that the use of the extension to capture login details without permission would violate wiretapping laws and/or computer security laws in some countries. Despite the security threat surrounding Firesheep, representatives for Mozilla Add-ons have stated that it would not use the browser's internal add-on blacklist to disable use of Firesheep, as the blacklist has only been used to disable spyware or add-ons which inadvertently create security vulnerabilities, as opposed to attack tools (which may legitimately be used to test the security of one's own systems).[4] Note that even if they did, it wouldn't actually prevent anyone from using Firesheep, as Firefox contains a hidden setting to disable this blacklist.[5] Countermeasures[edit]

Top 10 Password Crackers SecTools.Org: Top 125 Network Security Tools For more than a decade, the Nmap Project has been cataloguing the network security community's favorite tools. In 2011 this site became much more dynamic, offering ratings, reviews, searching, sorting, and a new tool suggestion form . This site allows open source and commercial tools on any platform, except those tools that we maintain (such as the Nmap Security Scanner , Ncat network connector , and Nping packet manipulator ).

Transferring your iTunes Library For most users, iTunes does a great job of handling all of the details of managing your media library for you, allowing you to manage your content through iTunes itself and not having to worry too much about the underlying files and folders that make up your iTunes library. Unfortunately, this user-friendly approach has one serious limitation: When it comes time to move your iTunes library, it can often be a bit of a challenge to figure out exactly what pieces you need to move and how to go about doing this. Many iTunes users start out with a basic iTunes library and use the default settings to store all of their media content on their primary internal hard drive. However, as you add new content over time, particularly with the additional video content now supported by iTunes, you may soon find that your library threatens to take over your computer.