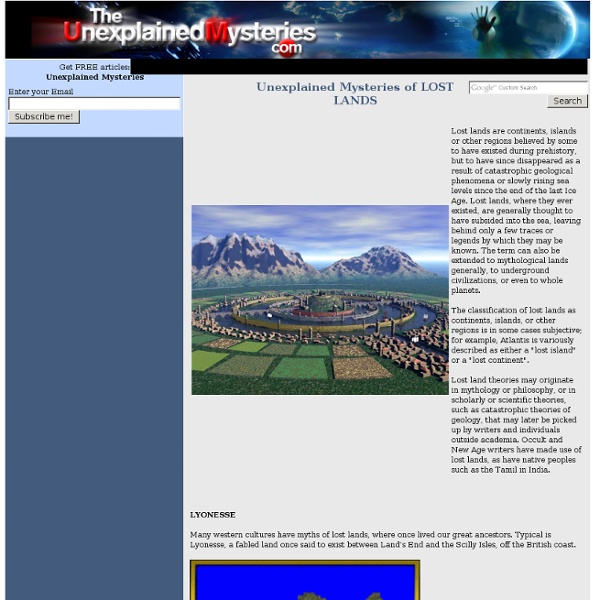 Many western cultures have myths of lost lands, where once lived our great ancestors. Typical is Lyonesse, a fabled land once said to exist between Land’s End and the Scilly Isles, off the British coast. On this land stood the city of Lions and some 140 churches. Folk tales, and later poets such as Tennyson, kept the fable alive by associating it with King Arthur. Thought to be the place of his birth, his death has also been associated with the lost land. Another such fable concerns Atland. Some lost lands are more modern, and said to be rationally theorised to have existed. In the 1870s, the idea was taken up by the likes of Huxley and Wallace, leading scientists of their day. A further lost land is Mu, which, according to former Bengal Lancer, Col James Churchward, existed in the Pacific Ocean. As we can see, most of these lost lands are quite fanciful, but share a similar psychology to other forms of lost worlds. Why is this the case? © Anthony North, December 2007 Liked it ? Related:  Astrology

1000-year-old coins found in Northern Territory may rewrite Australian history | Space, Military and Medicine A find of 1000-year-old coins (not pictured) had led archaeologists to launch an expedition that may rewrite Australian history. Source: news.com.au REMEMBER when you were taught that Australia was discovered by James Cook in 1770 who promptly declared it "terra nullius" and claimed it for the British throne? Turns out that could be completely and utterly wrong. Five copper coins and a nearly 70-year-old map with an "X" might lead to a discovery that could rewrite Australia's history. Australian scientist Ian McIntosh, currently Professor of Anthropology at Indiana University in the US, is planning an expedition in July that has stirred up the archaeological community. The scientist wants to revisit the location where five coins were found in the Northern Territory in 1944 that have proven to be 1000 years old, opening up the possibility that seafarers from distant countries might have landed in Australia much earlier than what is currently believed. The coins proved to be 1000 years old.

Unsolved Mysteries of Ouija Board - Learn how to use Ouija Board MENTION THE USE of a Ouija board to a paranormal research group these days and you’ll get a lot of head shaking and statements about “opening portals” and “demonic entities”. Mention it to religious fundamentalists and you’ll practically see them shudder and back away on shaky legs, as if the board was created by Satan himself as a means of enslaving human souls.How did the Ouija board and similar “talking boards” get this reputation? Is it deserved? The talking board has been around for well over 100 years. Marketed as a toy, the Ouija has been a best-seller for decades. This seems to be a relatively new idea. Subsequent movies such as Witchboard, The Craft, and others further promoted the idea that the Ouija was a conduit to dark forces. Then many paranormal researchers also came around to this way of thinking, but I've never come across any convincing evidence that would lead to this position. And what of the supernatural aspects? How To Use a Ouija Board Here's How: 1. 2. 3. 4. 5.

Nassim Haramein - Sacred Geometry and Unified Fields Physicist Nassim Haramein presents new concepts explaining how we are all interconnected and can access infinite knowledge. “My brain is only a receiver. In the Universe there is a core from which we obtain knowledge, strength, inspiration. As early as 9 years old, Nassim was already developing the basis for a unified hyper-dimensional theory of matter and energy, which he eventually called the “Holofractographic Universe.” Nassim Haramein was born in Geneva, Switzerland in 1962. Combining this knowledge with a keen observation of the behavior of nature, he discovered a specific geometric array that he found to be fundamental to creation, and the foundation for his Unified Field Theory emerged. This groundbreaking theory has now been delivered to the scientific community through peer-reviewed papers and presentations at international physics conferences. Fluent in both French and English, Haramein has been giving lectures and seminars on his unification theory for over 20 years.

Ancient Builders Created Monumental Structures that Altered Sound and Mind, Say Researchers Hal Saflieni Hypogeum on the island of Malta By Popular Archaeology The results of recent research suggests that ancient, or prehistoric, builders of the monumental structures found in such diverse places as Ireland, Malta, southern Turkey and Peru all have a peculiarly common characteristic — they may have been specially designed to conduct and manipulate sound to produce certain sensory effects. Beginning in 2008, a recent and ongoing study of the massive 6,000-year-old stone structure complex known as the Hal Saflieni Hypogeum on the island of Malta, for example, is producing some revelatory results. Researchers at the University of Malta are confirming the findings in an ongoing study. Inside Malta’s Hal-Saflieni Hypogeum. But the Hypogeum is not alone in its peculiar sound effects. The site of Göbekli Tepe. The Lanzon is a sacred statue or stela depicting the central deity of the ancient Chavín culture. So what does all of this mean? Article Sources

The Malleus Maleficarum Famous Ancient Sunken Cities Around the World (PHOTOS) Ruins of numerous such cities, submerged beneath the sea, have been discovered across the world. Most of these finds were a result of the constant effort to find the fictional and lost city of Atlantis, which has many assumptions associated with its actual existence. In March last year, researchers claimed that Atlantis may be found in the marshlands of the Dona Ana Park, southwest Spain, while few months later another research team likened an ancient 56-million-year-old landscape found submerged beneath the North Atlantic Ocean, west of the Orkney-Shetland Islands, to Atlantis. In 1999, British historian and cartographer Jim Allen claimed that the legendary lost city of Atlantis was located where present-day Quillacas is. Be it a myth or fact, the existence of Atlantis that possibly got swamped in a massive tsunami in 9600 BC remains to be based on various hypotheses. Know more about some of the famous sunken cities around the world here. Helike, Greece Photo Credit: The Helike Project