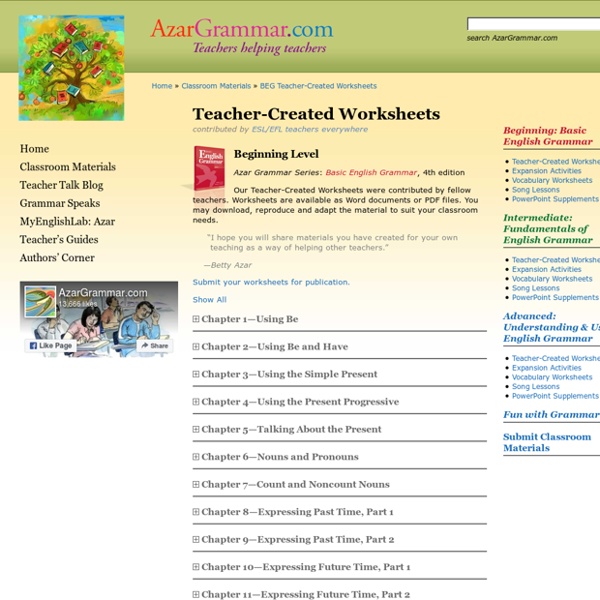 contributed by ESL/EFL teachers everywhere Azar Grammar Series: Basic English Grammar, 4th edition Our Teacher-Created Worksheets were contributed by fellow teachers. Worksheets are available as Word documents or PDF files. You may download, reproduce and adapt the material to suit your classroom needs. “I hope you will share materials you have created for your own teaching as a way of helping other teachers.” —Betty Azar Submit your worksheets for publication. Chapter 1—Using Be A / An / The and Prepositions Assessment Michelle Cohen Ivy Collegiate Academy Adjective Mix and Match Contractions with Be Myra M. Error Analysis Find the Scary Creatures—Prepositions of Place Keith Pluas Colegio La Quinta del Puente In and Around the Bus—Prepositions of Place Negative Contractions with BE Noun + Is and Are Kelly Kennedy-Isern Miami Dade College Prepositions of Place Pronoun + Be + Noun Review The Be Verb Present and Past The teachers at Edmonds Community College The Verb To Be Review Using Adjectives with Be

IF only » Lesson Plan: The Count (Pre-Intermediate) Game: The Count by Scott Adams (1979) Level: Pre-Intermediate Time needed to play: 45 – 60 minutes (not to completion); Suggested pre-reading activity: 45 minutes Lesson fit: Links nicely to Halloween-themed lessons or topics of horror/fear. Game file: If using Windows, try this interpreter with this game file (unzip the game file first). NOTE: This interpreter has a very clean interface, and it can be run from a USB drive. Play online: at or (this one has a lot more lag than freecade). Materials: Pre-reading task materials: The Count Difficult Vocabulary List Dracula text-reconstruction activity The Count – Vocabulary and commands Post-reading materials: Text-reconstruction website The Count Encrypted Hint-sheet (doesn’t give away unneeded clues) The Count Non-encrypted Hint-sheet The Count detailed walkthrough The Count quick walkthrough The Count Map (blank) The Count Map (completed) The Count Lesson Plan:

Cutting Edge - Student book + DVD-ROM   (Advanced) by Sarah Cunningham, Peter Moor, Araminta Crace on Pearson Japan K.K This fully-revised edition builds on the task-based learning approach that has made Cutting Edge so popular. With fresh, new, integrated DVD material and digital components, learners can be confident of improving their language skills through a carefully balanced range of activities. New features include World Culture lessons that encourage discussion of contemporary global issues and Language Live lessons that enable students to practice functional language and writing skills. MyEnglishLab for Cutting Edge Third Edition is the perfect way for students to practice when and where they want and instantly get their grades and feedback. The Student’s DVD-ROM contains all the audio and video clips and a digital Mini dictionary of key vocabulary. The booklets introduce CAN-DO Statements for each activity in the course. GSE Teacher's Booklet (Can-Do Descriptors)

Grammar mind maps About designer lessons George Chilton is an English teacher and writer based in Barcelona, Spain. He came to the city in 2008 with a plan to stay for 6 months. Spanish time is a little different to the rest of the world. He’s sharing some of the ESL lessons he uses in this blog. Neil McMillan is an English Teacher and Teacher-Trainer also based in Barcelona. We think ESL lessons should be… Fun and inspiring and useful and relevant and spontaneous and intelligent and unplugged and sometimes surprising. Then again… For the most part, the “designer lessons” aim to elicit natural language in order to create a dialogic relationship between the teacher and the learner. We’re not saying that if you use these lessons your students are gonna leave the class sounding like something from Emmerdale, but – with a bit of luck – they’re going to have had something resembling a real-life conversation. So these lessons… Aim to engage and promote conversation in a semi-controlled way. Like this: Like Loading...

Four More Years | Scholastic News Online President Obama greeted a crowd of supporters after winning a second term in the White House. (Reuters / Kevin Lamarque / Landov) Former Governor Romney gave a brief concession speech at about 1 a.m. (Reuters / Mike Segar) President Barack Obama has won a second term as the leader of the United States of America. With First Lady Michelle Obama and daughters Malia and Sasha at his side, Obama addressed cheering supporters at the McCormick Place convention center in his hometown of Chicago, Illinois. Obama spoke of moving past the challenges that the country has been facing. At the close of an election that sharply divided the country, President Obama emphasized the importance of national unity. After calling the President to concede, or admit defeat, Governor Romney gave a brief speech. Based on Tuesday’s results, Obama has decisively won the electoral vote. When Americans go to the voting booth, they don’t vote directly for President. President Obama was born in Hawaii on August 4, 1961.

CBBC Newsround - US election: Barack Obama re-elected as president This page was made on Wednesday 7th November 2012Last updated at 06:25 How Obama did it Barack Obama has been re-elected as US President. Obama has secured enough votes from the different states to win four more years in the White House. Reactions to Obama's victory outside the White House The president and his family were roared by the crowd in his hometown of Chicago as they turned up for his victory speech. He said: "We have picked ourselves up, we have fought our way back. Defeated - Mitt Romney from the Republican Party Obama has beaten his challenger Mitt Romney from the Republican Party, after a long and closely fought race. Opinion polls had the two men neck and neck in the weeks leading up to the election. Barack Obama and his family Continue reading the main story Barack Obama - 303 votes Mitt Romney - 206 votes Florida still to declare 270 votes needed for victory Each state allocated votes based on population He then joked: "But I will say for now, one dog's probably enough."