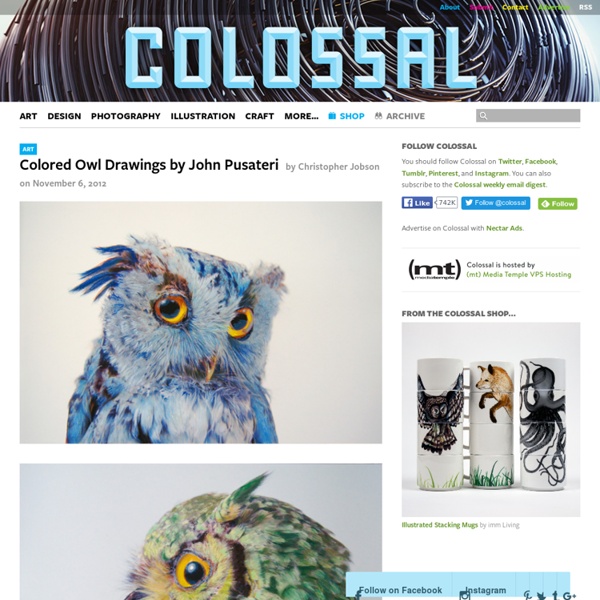 Using pencils, charcoal, and pastels artist John Pusateri creates near photo-realistic drawings of beautifully colored owls. Pusateri currently teaches in the Department of Architecture at Unitec New Zealand and currently has a number of works available through Seed Gallery. See more from this owl series in his portfolio. (via devid sketchbook, thnx jessica)

Kentaro Nagai: Chinese Zodiak 12 Feb 2009 In a series of illustrations entitled "Twelve Animals," graphic artist Kentaro Nagai rearranges the world map to create the beasts of the Chinese zodiac. Rat Ox Map Paintings by Fernando Vicente Originally published on August 5th, 2013: We are fans of Madrid-based artist Fernando Vicente, and have shown his work several times before. Today we take a look at his Atlas series, a series of paintings on old maps where here skillfully transforms countries and continents into faces, animals, and skulls using acrylic paint. Check out more of Vicente's work here. the quiet revolution Crested Tit Close up of the Crested Tit Long Tailed Tit - drawn for the 'Spring' Exhibition for Outline Editions

30 Most Ridiculous Doodles on Draw Something Draw Something is a mobile app developed by Omgpop. It was one of the Mobile apps which won the Flurry App Spotlight Awards in 2012. In the first five weeks after its launching, the game was downloaded 20 million times. Incredible Living Painting With Realistic Body Paint Usually, we admire that the artists can create characters vividly, while this time, we will introduce a different artist who turns living, breathing people into characters in oil painting. That is Alexa Meade. Alexa Meade is a 23-year-old artist based in Washington, DC area. She spent four summers interning on Capitol Hill and in 2008 was a press staffer on the Obama Campaign. She graduated in 2009 from Vassar College in Poughkeepsie, NY with a bachelor’s degree in political science.

Riusuke Fukahori Paints Three-Dimensional Goldfish Embedded in Layers of Resin First: watch the video. Japanese artist Riusuke Fukahori paints three-dimensional goldfish using a complex process of poured resin. The fish are painted meticulously, layer by layer, the sandwiched slices revealing slightly more about each creature, similar to the function of a 3D printer. I really enjoy the rich depth of the pieces and the optical illusion aspect, it’s such an odd process that results in something that’s both a painting and sculptural. Wonderful. The French Doodler From elaborate patterned owls to wacky doodle characters, illustrator DZO Olivier loves to draw with pens on paper, and sometimes he works with digital tools. Artwork © DZO Olivier Via Houhouhaha

Recycleables - Tutorial - Paper Doll House We were all set this morning, coats, gloves and hats on ready to head out the door until... Snow...and rain...and icy winds...and...no So back inside and now I've have a three year old who was desperately looking forward to a walk around the town this morning, because this morning we were supposed to be going to get her some new ballet pumps. Ah well, such is life I guess. I'll measure her feet and run down tomorrow while she's with Nana, come hell or high water. Anonymous Confessions As they say, what happens in Vegas stays in Vegas – but what if we could share with full discretion? Everyone of us has his own little secrets and ‘Confessions’, a public art project by american artist Candy Chang, invites people to anonymously share their confessions and see the confessions of people around them in the heart of the Las Vegas strip. Chang lived in Las Vegas for a month and turned her P3 Studio gallery into a contemplative place for people to share their confessions and being fascinated by the secrets others hide inside themselves. Inspired by Post Secret, Shinto shrine prayer walls, and Catholicism, people could write and submit their confessions on wooden plaques in the privacy of confession booths. By the end of the exhibition, over 1500 confessions were displayed on the walls.

Animal Constellation Chalk Art Paris-based Philippe Baudelocque takes chalk art to a whole new level. Drawing on a black background, his incredibly intricate animals look like constellations on a dark night. Each drawing is composed of cells, and each cell has its own pattern. With beautiful layers, these three-dimensional animals look like they're ready to jump off the city walls. Philippe Baudelocque Spectacular Moleskine Doodles Explode with Energy Philippines-based illustrator Kerby Rosanes proves that doodling can be so much more than scratching unintelligible scribbles on paper. Through his Sketchy Stories blog, Rosanes shares his wonderful world of doodling in a simple Moleskine sketchbook. Equipped with an ordinary Moleskine, a few Uni Pin drawing pens, and his innate gift for drawing, the artist is able to transport viewers to a world where tiny, cartoonish creatures explode with gusto to make up larger entities. Each of the illustrator's complex and crowded sketches are filled with minute details that allow the eye to wander and discover new characters and designs at every turn. The portraits are immediately mesmerizing, but even more spectacular when looked upon closely. Rosanes says that he's on a bit of an illustration high from merging animals with his "crazy doodle monsters" but admits, "I’m liking the results of every fusion."