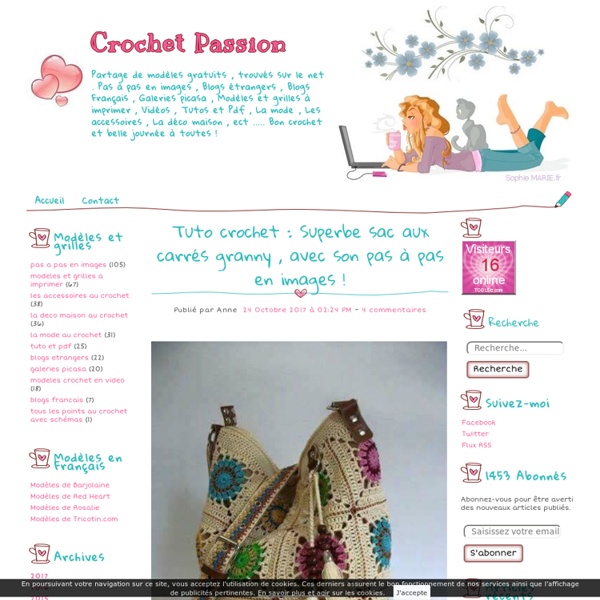 "KIRA" - lalylala crochet pattern N° VII - Kangaroo pattern by Lydia Tresselt Say hello to KIRA! Kira can be seen from afar by her long scarlet colored scarf - so the koalas sometimes call her the “Red Kira”. In her spacious pouch she keeps everyday things and her impressive collection of antique cushion springs - and of course her baby kangaroo feels most at home here. After a furious victory in the shadow boxing championship, the two prepare themselves for the world championship in long-jump.

Tutos : 50 grilles de carrés au crochet Tutos disponibles sur Otiskyprstu Clic droit pour agrandir - Right click to enlarge Armed only with a hook and a massive stash I was perusing through craft magazines at the bookstore when I came across the Summer 2012 issue of Stitch Craft Create. In it I found an article about basic yarn dyeing with food colouring products. In particular, I was intrigued by the idea of solar dyeing, which is a method that uses the heat from the sun to set the dye colour as an alternative to the more conventional method of the microwave or oven. With near-record high temperatures this summer, I figured I had a perfect opportunity to try this out.

How to Read a Crochet Pattern, and Crochet Decoder App Giveaway! (If you're just interested in the giveaway, scroll to the bottom of this post to find it!) You guys are doing great so far! You've learned the basic stitches (from chaining and single crochets through half double and double crochets) and you're ready to tackle a pattern . . . right? You would be, if pattern directions were written in plain English, which they almost never are. Instead, they usually look something like this: Ch 20. Free Crochet Basketweave Bracelet Pattern Click on any photo to see it larger. Buttons sewn onto the first 8 rows of single crochets. Triple Crochets at the other end of the bracelet. Tatting with a Crochet Hook Tatting with a Crochet Hook Please compare the photo of a crochet designed for tatting with a regular crochet hook. The tatting crochet hool has a straight non-tapered shank similar to a tatting needle while a regular crochet hook has a tapered shank and often a wide spot for ease of handling in the center. Tatting with a Crochet Hook Instructions from 1869 Godey's Lady Book Vol. 78, page 271. This page of patterns was rescued from obscurity by Rebecca Hollenbaugh, former editor of Old Time Crochet And these instructions were typed and the scans of the diagrams made usable by Tammy Rodgers.

Mes favoris tricot-crochet Tuto Bordures au crochet *Skip 2 stitches, then dc 7 times into the next stitch. Skip 2 stitches, then slip stitch into the next stitch. Easy Textured Cowl Matching Cowl and Gloves pattern As promised, here is the matching Cowl to my Easy Textured Fingerless Gloves, which I posted last week. Once I had decided what to do with this yarn this set worked up nice and quickly, and are keeping me lovely and warm this November. I’m actually wearing them indoors to save putting on the heating too much! I have had lots of fun experimenting with different ways of buttoning this cowl. 'Dutch knitting' or Shepherd's crochet This is a technique which I learned from my mother who refers to it as 'knitting'. The technique does not actually use normal knitting needles, not does it use a conventional crochet hook, but a differently shaped, wooden one she calls a 'pen'. I've written this tutorial on request of many avid knitters and crocheters on BurdaStyle and elsewhere who want to learn this variation. A lively debate on the technique and its origins can be found on www.ravelry.com (search for 'Dutch Knitting Pen') where it was established that the technique is probably neither Dutch nor knitting. In honour of my mum I am going to be following our family tradition and continue to call this knitting in this tutorial.

Shabby Chic Rose Granny Free Pattern Shabby Chic Rose Granny By AnnooCrochet Designs Throughout history no flower has been so loved, or renowned as the rose. Rose is older than the human hands that first cared for it, drew pictures of it, and celebrated rose in music and lore. Forty million years ago, a rose left its imprint on a slate deposit at the Florissant Fossil Beds in Colorado, and fossils of roses from Oregon and Montana date back 35 million years, long before humans existed. Diagonal Tunisian Crochet Stitch Pattern 101712 by M. J. Joachim I’ve been working diligently on a few fairly large projects lately. In between, I’ve been fiddling around with different combinations of Tunisian crochet stitches, and writing them down in a notebook. I was fairly certain this one pattern was magnificent – until I tried to replicate it, that is.