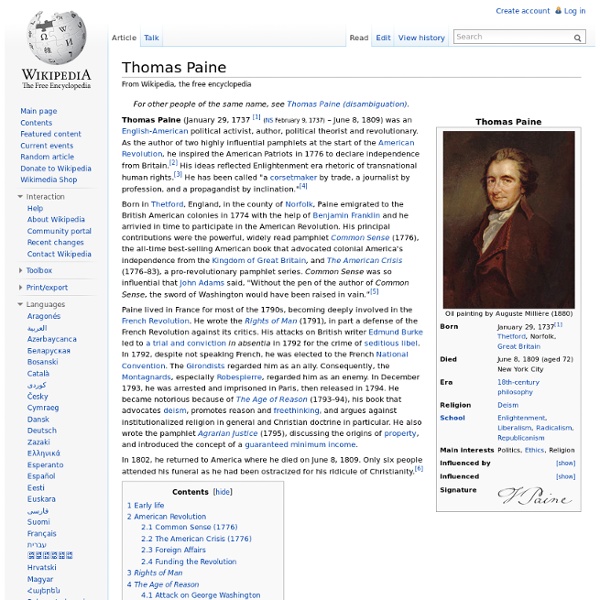 Paine lived in France for most of the 1790s, becoming deeply involved in the French Revolution. He wrote the Rights of Man (1791), in part a defence of the French Revolution against its critics. His attacks on British writer Edmund Burke led to a trial and conviction in absentia in 1792 for the crime of seditious libel. In 1792, despite not being able to speak French, he was elected to the French National Convention. The Girondists regarded him as an ally. Consequently, the Montagnards, especially Robespierre, regarded him as an enemy. In December 1793, he was arrested and imprisoned in Paris, then released in 1794. Early life[edit] He attended Thetford Grammar School (1744–49), at a time when there was no compulsory education.[9] At age thirteen, he was apprenticed to his corsetmaker father; in late adolescence, he enlisted and briefly served as a privateer,[10][11] before returning to Britain in 1759. In July 1761, Paine returned to Thetford to work as a supernumerary officer.

Radical From Wikipedia, the free encyclopedia Jump to navigationJump to search Radical may refer to: Arts and entertainment[edit] Music[edit] Other uses in arts and entertainment[edit] French Revolution Revolution in France, 1789 to 1799 The causes of the French Revolution are complex and are still debated among historians. The American Revolution helped set the stage for the events of the French Revolution, having shown France that a rebellion based on Enlightenment principles, including natural rights and equality for all citizens, against an authoritarian regime could succeed. German diplomat Friedrich von Gentz (1764-1832) observed in a treatise published in France in 1800: The example of this undertaking, crowned with the most complete success, must have had a more immediate and powerful influence upon those, who destroyed the old government of France, than the example of any earlier European revolution: the circumstances, in which France was, at the breaking out of her revolution, had been, if not wholly, yet for the greatest part brought on by the part she had taken in that of America.

Natural theology Natural theology, once also termed physico-theology, is a type of theology that provides arguments for the existence of God based on reason and ordinary experience of nature. This distinguishes it from revealed theology, which is based on scripture and/or religious experiences, also from transcendental theology, which is based on a priori reasoning. It is thus a type of philosophy, with the aim of explaining the nature of the gods, or of one supreme God.

Elite Political cartoon from October 1884, showing wealthy plutocrats feasting at a table while a poor family begs beneath Mills states that the power elite members recognize other members' mutual exalted position in society.[2] "As a rule, 'they accept one another, understand one another, marry one another, tend to work, and to think, if not together at least alike'."[3][4] "It is a well-regulated existence where education plays a critical role.

Freedom of thought "Without freedom of thought there can be no such thing as wisdom & no such thing as publick liberty without freedom of speech", Benjamin Franklin, 1722. Overview[edit] Freedom of thought is the precursor and progenitor of—and thus is closely linked to—other liberties, including freedom of religion, freedom of speech, and freedom of expression.[1] Though freedom of thought is axiomatic for many other freedoms, they are in no way required for it to operate and exist. The conception of a freedom or a right does not guarantee its inclusion, legality, or protection via a philosophical caveat. It is a very important concept in the Western world and nearly all[citation needed] democratic constitutions protect these freedoms. For instance, the Bill of Rights contains the famous guarantee in the First Amendment that laws may not be made that interfere with religion "or prohibiting the free exercise thereof".

Toleration Toleration is the allowing, permitting, or acceptance of an action, idea, object, or person which one dislikes or disagrees with. Random House Dictionary defines tolerance as "a fair, objective, and permissive attitude toward those whose opinions, beliefs, practices, racial or ethnic origins, etc., differ from one's own".[1] Toleration may signify "no more than forbearance and the permission given by the adherents of a dominant religion for other religions to exist, even though the latter are looked on with disapproval as inferior, mistaken, or harmful."[2]

Isaac Newton Influential British physicist and mathematician Sir Isaac Newton PRS (25 December 1642 – 20 March 1726/27[a]) was an English mathematician, physicist, astronomer, theologian, and author (described in his own day as a "natural philosopher") who is widely recognised as one of the most influential scientists of all time, and a key figure in the scientific revolution. His book Philosophiæ Naturalis Principia Mathematica (Mathematical Principles of Natural Philosophy), first published in 1687, laid the foundations of classical mechanics. Atheism Atheism is, in a broad sense, the rejection of belief in the existence of deities.[1][2] In a narrower sense, atheism is specifically the position that there are no deities.[3][4][5] Most inclusively, atheism is the absence of belief that any deities exist.[4][5][6][7] Atheism is contrasted with theism,[8][9] which, in its most general form, is the belief that at least one deity exists.[9][10][11] The term "atheism" originated from the Greek ἄθεος (atheos), meaning "without god(s)", used as a pejorative term applied to those thought to reject the gods worshiped by the larger society.[12] With the spread of freethought, skeptical inquiry, and subsequent increase in criticism of religion, application of the term narrowed in scope. The first individuals to identify themselves using the word "atheist" lived in the 18th century during the Age of Enlightenment. Arguments for atheism range from the philosophical to social and historical approaches. Definitions and distinctions Range

Deism Deism ( DEE-iz-əm [1][2] or DAY-iz-əm; derived from Latin "deus" meaning "god") is the philosophical position that rejects revelation as a source of religious knowledge and asserts that reason and observation of the natural world are sufficient to establish the existence of a Supreme Being or creator of the universe.[3][4][5] At least as far back as Thomas Aquinas, Christian thought has recognized two sources of knowledge of God: revelation and "natural reason". The study of the truths revealed by reason is called natural theology. During the Age of Enlightenment, especially in Britain and France, philosophers began to reject revelation as a source of knowledge and to appeal only to truths that they felt could be established by reason alone. Such philosophers were called "deists" and the philosophical position that they advocated is called "deism". Deism as a distinct intellectual movement declined toward the end of the 18th century and eventually disappeared.

George Cruikshank George Cruikshank (27 September 1792 – 1 February 1878) was a British caricaturist and book illustrator, praised as the "modern Hogarth" during his life. His book illustrations for his friend Charles Dickens, and many other authors, reached an international audience. Early life[edit] Cruikshank was born in London. The Age of Reason Title page from the first English edition of Part I Several early copies of The Age of Reason The Age of Reason; Being an Investigation of True and Fabulous Theology is a work by English and American political activist Thomas Paine, arguing for the philosophical position of deism. It follows in the tradition of 18th-century British deism, and challenges institutionalized religion and the legitimacy of the Bible. It was published in three parts in 1794, 1795, and 1807. Most of Paine's arguments had long been available to the educated elite, but by presenting them in an engaging and irreverent style, he made deism appealing and accessible to the masses.

Reign of Terror The Reign of Terror, or The Terror (French: la Terreur), refers to a period during the French Revolution after the First French Republic was established in which multiple massacres and public executions occurred in response to revolutionary fervor, anti-clerical sentiment, and frivolous accusations of treason by Maximilien Robespierre and his Committee of Public Safety. Several historians consider the "reign of terror" to have begun in 1793, placing the starting date at either 5 September,[1] June[2] or March (birth of the Revolutionary Tribunal), while some consider it to have begun in September 1792 (September Massacres), or even July 1789 (when the first lynchings took place),[3] but there is a consensus that it ended with the fall of Maximilien Robespierre in July 1794.[1][2] Between June 1793 and the end of July 1794, there were 16,594 official death sentences in France, of which 2,639 were in Paris.[2][4] Barère and Robespierre glorify "terror"[edit]

Louis XVI of France King of France Louis's indecisiveness and conservatism led some elements of the people of France to view him as a symbol of the perceived tyranny of the Ancien Régime, and his popularity deteriorated progressively. His disastrous flight to Varennes in June 1791, four months before the constitutional monarchy was declared, seemed to justify the rumors that the king tied his hopes of political salvation to the prospects of foreign intervention. The credibility of the king was deeply undermined, and the abolition of the monarchy and the establishment of a republic became an ever-increasing possibility. In a context of civil and international war, Louis XVI was suspended and arrested at the time of the Insurrection of 10 August 1792; one month later, the absolute monarchy was abolished; the First French Republic was proclaimed on 21 September 1792.