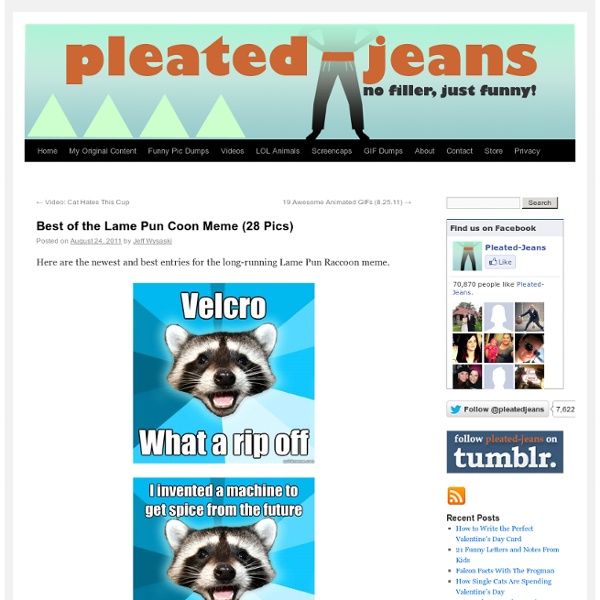 Mapping Stereotypes by alphadesigner Get your copy on: Amazon US / Amazon UK / Amazon DE / Amazon FR / Amazon IT / Amazon ES / Amazon Canada / Amazon Japan / Amazon India / Amazon Brazil Atlas of Prejudice: The Complete Stereotype Map Collection QueFart!?!?!? EPICponyz Tautology of the day Tautology of the day I just recently bought a new CD case. Here it is: The manufacturers helpfully describe its key feature on the packaging: I just had to buy it, when I saw what it could do! Update: Mike Williams writes in: I've noticed this same packaging label myself. Someone at that company has a cute sense of humor!

How to Flip your Partner in a Backward Walk Video Expectations vs. Reality (16 Pics) | Things don’t always go as planned. Check out the pics below to see a few examples of what happens when our expectations get punched in the face by reality. via via Tickling Expectations: Reality: via via via via via You may also like:

THEY'RE HERE! 2010 DARWIN AWARDS - You've been waiting for them with bated breath, so without further ado, here are the 2010 Darwin Awards. Eighth Place In Detroit, a 41-year-old man got stuck and drowned in two feet of water after squeezing head first through an 18-inch-wide sewer grate to retrieve his car keys. Seventh Place A 49-year-old San Francisco stockbroker, who "totally zoned when he ran", accidentally jogged off a 100-foot high cliff on his daily run. Sixth Place While at the beach, Daniel Jones, 21, dug an 8 foot hole for protection from the wind and had been sitting in a beach chair at the bottom, when it collapsed, burying him beneath 5 feet of sand. Fifth Place Santiago Alvarado, 24, was killed as he fell through the ceiling of a bicycle shop he was burglarizing. Fourth Place Sylvester Briddell, Jr., 26, was killed as he won a bet with friends who said he would not put a revolver loaded with four bullets into his mouth and pull the trigger. Third Place After stepping around a marked police patrol car parked at the front door, a man walked into H&J Leather & Firearms intent on robbing the store.

World's Most Absurd Warning Signs And Disclaimers 8 more of the world's most absurd warning signs and disclaimers. Some people say Americans' love of suing the crap out of each other is a bad thing, but if it wasn't for that litigious spirit our warning signs and product disclaimers would be far less entertaining. No matter how ridiculous they may seem, remember that at some point in time, someone did something to make each of these signs necessary. Updated 12/29/11:

Truth and Lies | Cretive Design Art Photos and Artworks American designer Justin Barber presented a series of papers Truth and Lies , in which he tried to develop a theme presenting the lies we tell ourselves and others. On posters written phrase, we usually say out loud, and in brackets says that we actually have in mind. Creative Graphic design artist used there is simple and stylish.