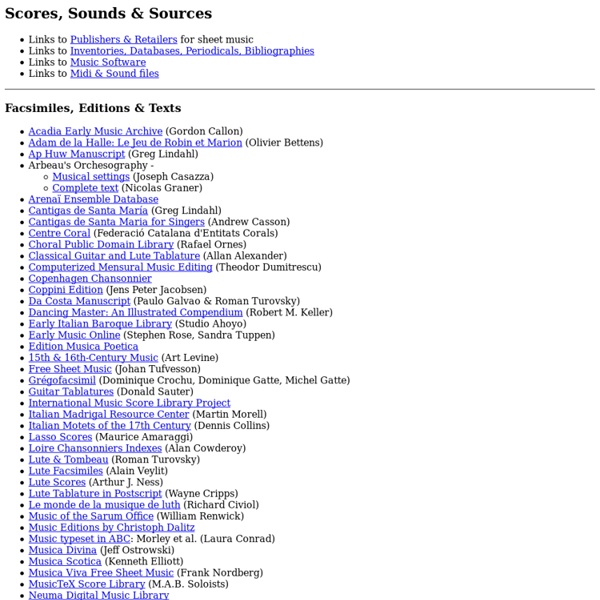 WIMA: Werner Icking Music Archive Welcome to the CANTUS Database! | CANTUS Database Renaissance Instruments Renaissance means rebirth or reinvention. Music of the Renaissance period was going through a rebirth as artists had more creative freedom than in earlier periods. The Renaissance was between the years 1400 to 1600 C.E., and the music of this time had a polyphonic style. Music was very much a sacred art form, but more composers started creating secular music for informal gatherings and dances. Organs, harps, and viols were the main Renaissance instruments used during church services and other sacred gatherings. The lute was a popular instrument used when playing music for dances. Shawm The shawm is a woodwind reed instrument used primarily for social and secular music of the Renaissance era. The Renaissance Shawm is a site maintained by Iowa State University that educates about the use and make of the shawm. Bass Recorder Bass recorders are of the woodwind family and were created in one piece. Muzika! Glastonbury Pipe Treble Viol Tabor Bass Viol Tenor and Bass Crumhorn

Search This collection holds digitised images of some of the world's oldest surviving volumes of printed music. Early Music Online is the result of a pilot project in which more than 300 volumes of 16th-century music from the British Library were digitised from microfilm. The project was funded by JISC as part of the Rapid Digitisation programme 2011. The digitised content is copyright © The British Library Board, and is made available for non-commercial use under the JISC Collections Open Education User Licence version 1.0. You may use the digitised content on Early Music Online in any way and for any such purposes that are conducive to education, teaching, learning, private study and/or research as long as you are in compliance with the terms and conditions of the licence.

All the World's a Stage Here's the latest update for our annotated list of REED-related web resources. I've reduced the number of separate pages to 10 and added some new resources, chiefly in the expanded Local History section. The REED Anglo-Latin Wordbook (linked on in the Mediaeval and Early Modern Theatre page), has been expanded to include the collections from Cambridge through Inns of Court. And we have also added PDFs of the revised REED Handbook and the Palaeographic checking guidelines. The need for annotated lists, that is, meta-bibliographies of sites, has never seemed greater. In the course of this update, a search engine returned 9,910,000 'hits' for the phrase 'medieval English theatre' and 99, 400,000 hits for the phrase 'early music'! Click below to open pages on the following topics: Mediaeval and Early Modern Theatre Shakespeare Other Theatre Resources Play Texts Early Music Early Dance Palaeography Archives, Libraries, and Other Repositories Journals On-Line Local History Links

La Trobe University - Library: Medieval Music Database - Annual cycle of feasts of liturgical chant, liturgical polyphony and secular music of the late middle ages. Browse by Text This revision of the Medieval Music Database, first mounted on the Internet in 1994 and expanded in 1996 has now further expanded the range of works which can be browsed from 7,800 to 70,000. Its current scope covers all of the music of the fourteenth century and all liturgical chant currently electronically indexed, adding to these links transcriptions with modern music notation (where melodic information is available),original manuscripts where possible and links to the electronic editions themselves. Browse by Composer All of the named composers of the fourteenth century are listed, along with the alternate forms of their names. All of the manuscript sources of their works, biographical literature and recordings are identified and cross-linked to details of each individual work, genre and manuscript. New composers are progressively being added, working backwards from the fourteenth century.