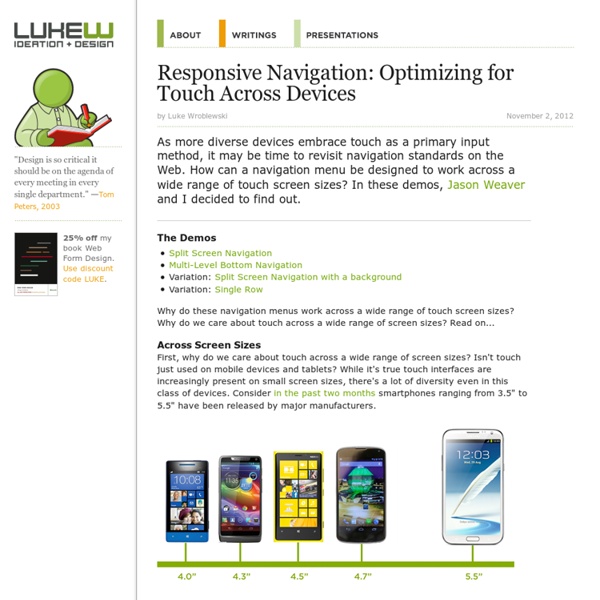 As more diverse devices embrace touch as a primary input method, it may be time to revisit navigation standards on the Web. How can a navigation menu be designed to work across a wide range of touch screen sizes? In these demos, Jason Weaver and I decided to find out. The Demos Why do these navigation menus work across a wide range of touch screen sizes? Across Screen Sizes First, why do we care about touch across a wide range of screen sizes? Tablets are no different. And the very notion of what defines a tablet is being challenged by laptop/tablet convertibles and touch-enabled Ultrabooks. Even beyond 13 inches, touch and gesture interfaces are possible. Accounting For Touch So what does it mean to consider touch across all screen sizes? Touch target sizes are relatively easy: just make things big enough to prevent accidental taps and errors. Designing towards touch really forces us to simplify and decide what's most important- what needs to stay on the screen. An Adaptive Solution Related:  Responsive + Fluid

Touch Target Sizes People interact with touch-based user interfaces with their fingers. So user interface controls have to be big enough to capture fingertip actions without frustrating users with erroneous actions and tiny targets. Ok, so how big? In the iPhone Human Interface Guidelines, Apple recommends a minimum target size of 44 pixels wide 44 pixels tall. In the Windows Phone UI Design and Interaction Guide (PDF), Microsoft goes further and suggests: a recommended touch target size of 9mm/34px; a minimum touch target size of 7mm/26px; a minimum spacing between elements of 2mm/8px; and the visual size of a UI control to be 60-100% of the touch target size. They also suggest touch targets can be larger than 9mm if: the UI element is frequently touched; the result of a touch error is severe or really frustrating; the UI element is located toward edge of the screen or difficult to hit; or when the UI element is part of a sequential task –like using the dial pad.

The orientation media query Page last changed today Right now Jason Grigsby’s excellent summary of the orientation media query is making the round of blogs and tweets, and that’s well deserved. Media queries will become extremely important in the near future, when we have to build websites that work on any device resolution from 300px to 1280px or more. Still, there’s one tiny nitpick I’d like to make, so that you fully understand when to use orientation and when to use device-width. orientation is supported by Android 2, Bolt, MicroB, and Firefox. I’ve often discussed media queries with Vodafone in Düsseldorf, and in the end the consensus was that orientation is relatively useless, and that we should use device-width instead. First of all, device-width is vastly better supported. Secondly, device-width tells you what you need to know, while orientation doesn’t. That’s exactly what device-width tells you. @media all and (max-device-width: 400px) { // styles for screens with a maximum width of 400px } Concluding:

How Do Users Really Hold Mobile Devices? For years, I’ve been referring to my own research and observations on mobile device use, which indicate that people grasp their mobile phones in many ways—not always one handed. But some of my data was getting very old, so included a lot of information about hardware input methods using keyboard- and keypad-driven devices that accommodate the limited reach of fingers or thumbs. These old mobile phones differ greatly from the touchscreen devices that many are now using. Modern Mobile Phones Are Different Everything changes with touchscreens. So, I’ve carried out a fresh study of the way people naturally hold and interact with their mobile devices. What My Data Does Not Tell You Before I get too far, I want to emphasize what the data from this study is not. Most important, there is no count of the total number of people that we encountered. Since we made our observations in public, we encountered very few tablets, so these are not part of the data set. What We Do Know One-Handed Use

Media Queries for Standard Devices If you think responsive's simple, I feel bad for you son. We got 99 viewports, but the iPhone's just one. —Josh Brewer, March 10, 2010 A major component of responsive design is creating the right experience for the right device. With a gazillion different devices on the market, this can be a tall task. We've rounded up media queries that can be used to target designs for many standard and popular devices that is certainly worth a read. If you're looking for a comprehensive list of media queries, this repository is a good resource. If you're reaction to this is: you should never base your breakpoints on devices!! Phones and Handhelds iPhones Galaxy Phones Google Pixel HTC Phones Nexus Phones Windows Phone Tablets iPads Galaxy Tablets Nexus Tablets Kindle Fire Laptops Media Queries for laptops are a bit of a juggernaut. Wearables Yes, we're going there. Apple Watch @media (max-device-width: 42mm) and (min-device-width: 38mm) { } Moto 360 Watch

How to design for thumbs in the Era of Huge Screens - Scott Hurff After years of resistance, Apple’s iPhone 6 announcement last week officially signaled the Dawn of the Era of Huge Screens. And it’s going to crash into existence in a big way. Just this Monday, Apple announced that they’d sold over four million pre-orders for the phones the opening night of pre-orders. In only one night, they sold almost half of what they sold the entire opening weekend last year for iPhone 5s and 5c. So it’s looking like the 3.5” and 4” screens of yore will start their inevitable decline very quickly. That means that those of us who’ve gotten comfortable building apps, responsive sites and mobile-optimized web views with the old ways in mind have some learning to do (myself included). The decline is already in motion. That means that learning how to design for thumbs is now more important than ever. Apple’s changes will make our lives easier as smaller screen sizes die off. If not, the future is going to be pretty painful for those thumbs. Designing for Thumbs? Choking Up

That Web Guy - An introduction to responsive web design: using media queries Written December 29, 2011. 4 comments. You’ve no doubt heard the term by now, but what exactly is Responsive Web Design? As the name suggests, Responsive Web Design (from hereon in referred to as RWD) is about designing your web site with the use of media queries so that it responds (changes the presentation) to the web browser width, or in the case of mobile devices, the capabilities of said device. Essentially it’s about building a web site that’s device unbiased. In this article I’ll demonstrate a basic example which should get your creative juices flowing. How it used to work In the olden days a web designer would typically use Javascript to detect the browser size and redirect to one of the many versions of the web site that had been specifically created for whatever resolution your browser was using. How Responsive Web Design works At it’s core RWD is pretty basic. From a user experience perspective this is invaluable, assuming the designer has done a good job. Advantages: Confused?

alooma - modern data plumbing A pixel is not a pixel is not a pixel Page last changed today Yesterday John Gruber wrote about the upped pixel density in the upcoming iPhone (960x640 instead of 480x320), and why Apple did this. He also wondered what the consequences for web developers would be. Now I happen to be deeply engaged in cross-browser research of widths and heights on mobile phones, and can state with reasonable certainty that in 99% of the cases these changes will not impact web developers at all. The remaining 1% could be much more tricky, but I expect Apple to cater to this problem by inserting an intermediate layer of pixels. (Later John pointed out that such a layer already exists on Android.) One caveat before we start: because they’re unimportant to web developers I have mostly ignored the formal screen sizes, and I’m not really into disucssing the ins and outs of displays, pixel densities, and other complicated concepts. I do know what web developers are interested in, however. It’s easiest to explain when we consider zooming. Stay tuned.