Photoshop Tutorials and Add-ons, Everything for Photoshop 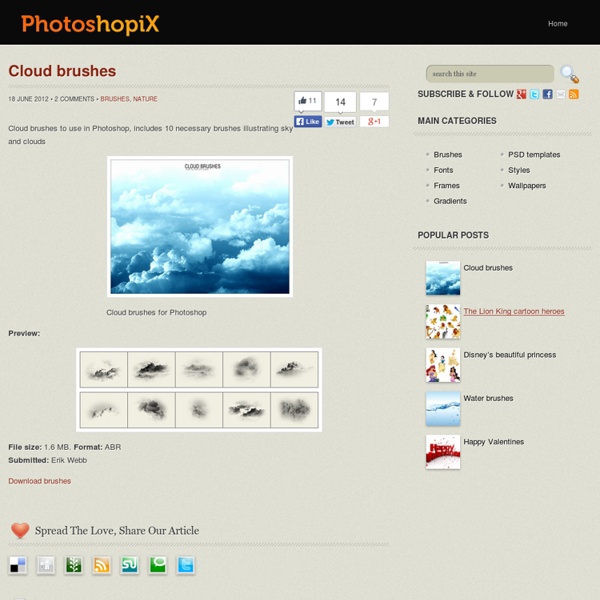 30 Photoshop secrets to improve your skills Photoshop is an amazing bit of software that many designers use on a daily basis. It's such a flexible bit of kit that you could spend a week learning new features, and still have only scratched the surface of what's possible. Once you've overcome the beginners' learning curve, however, there are some real gems hidden inside Photoshop that can help you speed up your work and get more out for less effort. Here we've rounded up 30 of the best Photoshop secrets to help sharpen your skills and improve your productivity.

Top Photoshop Tutorials on YouTube You Need to Watch We know how much are readers love great Photoshop tutorials. In this list we thought we would switch it up a bit and list some awesome Photoshop tutorials on video. While I prefer text and images when doing tutorials I know there are many people out there that would rather watch a video tutorial. Ladies and gentleman, without further delay I present to you the best Photoshop tutorials on YouTube. 1. Photo Manipulation Manipulate Smoke to Create Hyper-Real Images Learn to apply the Warp Tool effectively and a few other tricks to make smoke look like a skull. This technique has a variety of outcomes and works well with water, clouds and a whole bunch of other stuff. This is probably more for intermediate users, as I guide you through the process well, but not every Warp Grid point handle move. Let's get started! Final Image Preview Take a look at the image we'll be creating.

How to make a see-through to image text effect in Photoshop This is a really simple trick to creating an ordinary photograph with some text into an engaging image. I also have a GIMP version! See-Through Text Effect in Photoshop 1. Photoshop Effects: recreate the look of a medium format portrait When I first got in to photography, which wasn't quite 100 years ago, there were three reasonably clear groups of camera user. The happy snappers used compacts, the enthusiasts used SLRs and the professionals used medium, or large, format. If you were a really 'serious' amateur, and every club had at least one of these Yodas, you might have got yourself a medium format system, using 6x4.5cm, 6x6cm or even 6x7cm frames of 120 roll film. If you were a professional wedding or landscape photographer you wouldn't have dreamt of using a 35mm SLR, for credibility reasons as much as for quality, and a happy snapper wouldn't have known which end of a 35mm SLR or medium format camera to look through. Not much of that has meant a great deal in the last eight or so years, and the lines between what is professional equipment and what is amateur are exceedingly blurred. Old format, old hat

How to create a simple texture background in 5 seconds inShare7 First fill the background: Add a new layer and make a noise and then duplicate the layer: Do motion blur on the first layer with the angle of 0 degrees, distance 40 pixels: 50 Creative Photoshop Text Effect Tutorials inShare7 Even when you are an experienced Adobe Photoshop user, it’s always nice and useful to learn about new tricks and techniques, which help you to improve your professional skills. As nothing in this world stands on the same place, a lot of handy tutorials are appear daily on the web. Create a Fantasy Fiery Portrait Photo-Manipulation In this tutorial I’ll show you how to create a fantasy fiery portrait of a woman. You’ll learn how to use textures, add fire and create lighting effect. Final Image

Tutorial: More Texturing- Photoshopcontest.com By: ledirlo This tutorial demonstrates an effect that gets so photorealistic it led to some cheating controversies in the past. Aside from the interest of the created effect it also gives key layer technique information. How To Create a Realistic Money Effect in Photoshop The classic illustration style used on money is something I’ve always wanted to figure out how to replicate in Photoshop. There’s plenty of Photoshop tutorials that show how to create a basic halftone line effect, but they never quite capture that authentic engraved look with plenty of shading and tone. After lots of trial and error I finally managed to figure it out, so here’s an in depth tutorial on how to create a realistic money illustration effect in Photoshop (with some help from Illustrator!). The effect we’ll be creating in today’s tutorial is this vintage engraved or etched illustration style that builds up the tonal areas of an image with lots of tiny lines.

Good and Evil Photo Manipulation, Redux « Steel Frog – A blog on web design and gaming In this tutorial we’ll be taking a photo and splitting it in two: one side of the photo will be light and colorful while the other, in contrast, will be dark, evil and brooding. This is a complete re-write of my popular tutorial with new stock photos. I’ll be covering some of the basics on using brushes, using textures, color correcting, masking and several other neat effects. This tutorial requires that you have some working knowledge of Photoshop, but I do my best to try and explain in as much detail as possible.