A glimpse of teenage life in ancient Rome - Ray Laurence 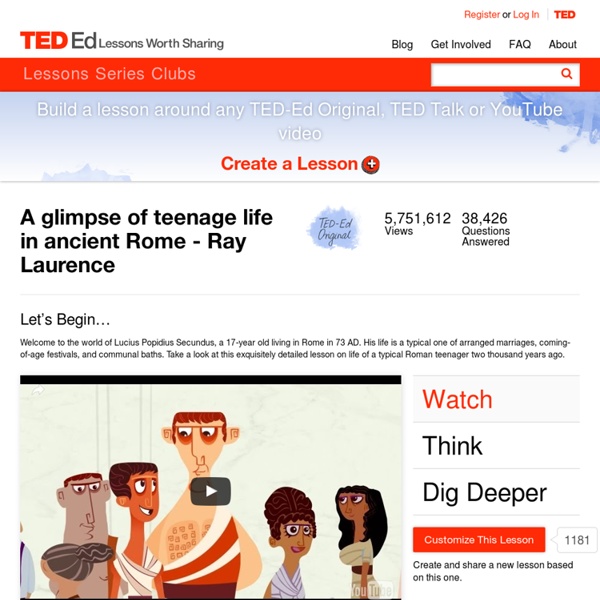 Primary History - Romans 40 maps that explain the Roman Empire by Timothy B. Lee on August 19, 2014 Two thousand years ago, on August 19, 14 AD, Caesar Augustus died. He was Rome's first emperor, having won a civil war more than 40 years earlier that transformed the dysfunctional Roman Republic into an empire. The rise and fall of Rome The rise and fall of RomeIn 500 BC, Rome was a minor city-state on the Italian peninsula. The rise of Rome Rome's military Rome's powerful maniple formation Rome's powerful maniple formationIn the early years of the republic, the Roman infantry used a version of the Greek phalanx. The republic becomes an empire Julius Caesar conquers Gaul Julius Caesar conquers GaulIn 58 BC, Julius Caesar took command of Rome's northern frontier and set out to conquer Gaul, which corresponds roughly to modern-day France. The lost city of Pompeii The eruption of Mount Vesuvius The eruption of Mt. The culture of Rome The journey of Aeneas The journey of AeneasVirgil, who lived from 70 BC to 19 BC, was one of ancient Rome's greatest poets.

Secrets of Lost Empires | Roman Bath | Construct an Aqueduct by Dennis Gaffney Aqueducts are one of the wonders of the Roman Empire. These graceful structures are not only majestic, but are engineering marvels that survive to this day. In "Construct an Aqueduct," you are hired as Chief Water Engineer by the Roman Emperor. Your job: to build an aqueduct that will supply the Roman city of Aqueductis with clean water to private homes, public baths and glorious fountains. Succeed, and citizens of Aqueductis will drink clean water and bathe happily. NOVA's Roman Aqueduct Manual Helpful hints for building your aqueduct Construct an Aqueduct Java applet (120k) To play the Java version of this game, you need a Java 1.1-enabled browser. Special thanks to Peter Aicher for his invaluable help creating "Construct an Aqueduct." A Day at the Baths | Construct an Aqueduct | Watering Ancient Rome NOVA Builds a Bath | Real Roman Recipes | Resources | Transcript Medieval Siege | Pharaoh's Obelisk | Easter Island | Roman Bath | China Bridge | Site Map

Four sisters in Ancient Rome - Ray Laurence Welcome to the world of Lucius Popidius Secundus, a 17-year old living in Rome in 73 AD. His life is a typical one of arranged marriages, coming-of-age festivals, and communal baths. Take a look at this exquisitely detailed lesson on life of a typical Roman teenager two thousand years ago. Freeborn women in ancient Rome were citizens (cives) but could not vote or hold political office. Porticus of Livia: Begun by Augustus on the site of the house of Vedius Pollio (q.v.) in 15 B.C., and finished and dedicated to Livia in 7 B.C. The Colosseum is an elliptical amphitheatre in the centre of the city of Rome, Italy. A gladiator was an armed combatant who entertained audiences in the Roman Republic and Roman Empire in violent confrontations with other gladiators, wild animals, and condemned criminals.

Bibliotheca Classica Selecta - Accueil Gracchi Brothers The social and political landscape of the Roman world was about to undergo an abrupt transformation in the Late Republic. The emergence, and eventual assassination of the Gracchus brothers, Tiberius and Gaius, is often considered the first major step towards the fall of the Roman Republic. While Roman class and social affairs had for centuries consisted of machinations by various individuals to get their way (such as the Plebs withdrawal from Rome in the early Republic), the activities of the Gracchi completely altered the state of Roman politics. The careers of these two men were marked by riots, murder, and ultimately, outright manipulation of the common population to achieve their goals. This political behavior would become increasingly more prominent in the 100 years from their time, through to Caesar and the eventual rise of Augustus. From 137 to 121 BC, Tiberius, and then Gaius Gracchus, stood at the center of this turmoil.

A day in the life of a Roman soldier - Robert Garland Interested in learning more about Roman legionaries? Check out this book or this one. G.R. Watson also delves into military life for both Greek and Roman soldiers in The Roman Soldier. This video shows how they prepared for battle, including what they wore and the equipment they carried. What were the differences between a Roman soldier and a Germanic warrior? Want to explore the possibilities of life in a Roman legion? Check out this course on being a Roman Soldier in The Other Side of History: Daily Life in the Ancient World, created by the educator.

Institut d'études anciennes - Accueil These Photos of Pompeii Show Slice of Ancient Roman Life that Was Buried Under 20 Feet of Ash - History Daily Sep 172016 On August 24, 79 AD, Mount Vesuvius, a 4,000-foot volcano near the Bay of Naples in Italy, erupted, burrying the city of Pompeii under an almost 20-foot blanket of volcanic ash and killing 2,000 people. It was one of the world’s most famous and deadly volcanic eruptions. The ancient Roman city was left untouched until explorers rediscovered it in 1748, finding that Pompeii was virtually intact underneath the dust and dirt. As a resort for Rome’s rich, elegant villas lined wide, paved streets. Some of these villas have been restored and are open to visitors, like the Casa del Fauno and Casa del Menandro. Pompeii was a bustling city with cafés, snack bars (the Thermopolium), and restaurants (Caupona Pherusa tavern), and even a 20,000-seat amphitheater. Approximately 2.5 million tourists visit the UNESCO World Heritage Site every year. Pompeii had a complex water system and port, and two bath houses. The volcanic eruption lasted 18 hours.