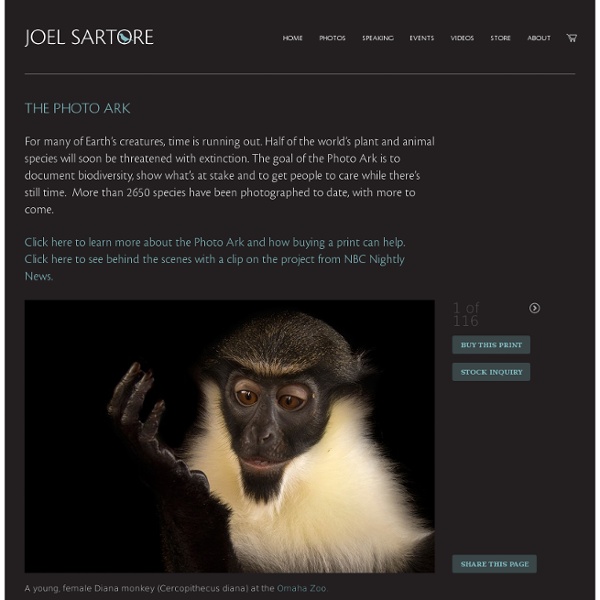 50 Incredible Photos Of Animals From 2011 10 Real Sea Creatures Lifted Directly from Your Nightmares #5. The Real Kraken National Geographic OK, we know there's something called the giant squid out there, but it's hardly the kind of beast that could drag your ship down to Davy Jones' Locker as described by old-timey sea legends. We used to assume that such a thing never existed -- until 2007, when fishermen dragged aboard something that we're now calling the colossal squid. tepapa.gov.nz"Hyper squid" just sounded too much like a rejected Metal Gear character. Scientists don't use the term "colossal" lightly. The folks who caught it had no choice but to freeze it on board their vessel, we assume after a spectacular battle like the Kraken fight scene from one of those Pirates of the Caribbean movies. tepapa.gov.nz"As you can see, we've glued a hat onto it." #4. Richard Hermann The reaction to this kind of photo is always the same: "So what? Well, the mola mola, or ocean sunfish, is the heaviest fish in the world. #3. National Geographic #2. National Geographic niwa.co.nzIt's like if H.R. #1.

News - US introduces $60 LED light bulb 22 April 2012Last updated at 00:41 GMT LED bulbs should last about 100,000 hours - giving them a life of about 20 years A prize-winning light bulb that lasts for 20 years is going on sale in the US on Sunday - also known as Earth Day. Made by Dutch electronics giant Philips, the bulb swaps filaments for light-emitting diodes to provide illumination. Using LEDs endows the light with a long life and a hefty price tag. Philips has arranged discounts with shops that will sell the bulb meaning some could buy it for only $20 (£12). Production ban The bulb triumphed in the Bright Tomorrow competition run by the US Department of Energy that aimed to find an energy efficient alternative to the 60-watt incandescent light bulb. The DoE challenged firms to develop a design that gave out a warm light similar to that from an incandescent bulbs but was much more energy efficient. Philips was the only entrant for the competition and its design underwent 18 months of testing before being declared a winner.

Conserving Africa's Wildlife Through Photography How often do we see exquisite imagery of animals that isn't a "When Animals Attack" special? Photographer Nick Brandt says, "The emphasis has generally been on capturing the drama of wild animals IN ACTION, on capturing that dramatic single moment, as opposed to simply animals in the state of being." I agree with Brandt and appreciate his stunning contributions to wildlife photography. The native Londoner first discovered the beauty of Africa's majestic creatures sprawled out on the breathtakingly unaltered landscapes in 1995, when he was still making music videos, practicing his formal training in film. It was in 2000 that that he shifted his medium of choice to photography. It isn't all gut-wrenching photography, though. Nick Brandt's website

| 50 Animals Who Love America Happy July 4! To celebrate getting a day off of work and our country, here are animals who will put your own patriotism to the test. Presenting 50 Animals Who Love America: Food Deserts and Obesity Role Challenged But two new studies have found something unexpected. Such neighborhoods not only have more fast food restaurants and convenience stores than more affluent ones, but more grocery stores, supermarkets and full-service restaurants, too. And there is no relationship between the type of food being sold in a neighborhood and among its children and adolescents. Within a couple of miles of almost any urban neighborhood, “you can get basically any type of food,” said Roland Sturm of the RAND Corporation, lead author of one of the studies. “Maybe we should call it a food swamp rather than a desert,” he said. Some experts say these new findings raise questions about the effectiveness of efforts to combat the obesity epidemic simply by improving access to healthy foods. “It is always easy to advocate for more grocery stores,” said Kelly D. Advocates have long called for more supermarkets in poor neighborhoods and questioned the quality of the food that is available. Mrs. Dr. But, Dr.

Wildlife Photographer of 2010 By Daily Mail Reporter Updated: 07:48 GMT, 5 October 2010 A daredevil seabird swoops over a cliff in a kamikaze-like dive - taken by a photographer Andrew Parkinson who is scared of heights. This jaw-dropping image is just one of the entries in this year's Veolia Environment Wildlife Photographer of the Year competition which kicks off with an exhibition at the Natural History Museum on 22 October. The competition will be stiff this year with mind-boggling photographs ranging from harrowing images of dead frogs in California to hoards of migrating monarch butterflies. The drop by Andrew Parkinson Animals in their Environment - Highly Commended: With his legs dangling over the edge, Andrew Parkinson tried to avoid any foreground showing in the picture by leaning right into the gale-force westerly The Thoughtful Baboon by Adrian Bailey of South Africa Celestial Cathedral by Kent Miklendra from Australia Fishing Frenzy by Tomasz Racznyski of Poland Catch of the Day by Jordan Calame from the USA

www.robertashdown.com/blog/ Lake Nuga Nuga, the largest natural water body within the dry highlands of the Central Queensland Sandstone Belt, is a place of many stories. About 515 km north-west of Brisbane, this lake is located at the northern (downstream) end of the Arcadia Valley, and lies within the floodplain of the Brown River, a tributary of the Comet River. The Comet River itself falls within the greater Fitzroy River basin (see map below), the waters from which eventually reach the Queensland coast near Rockhampton. During favourable seasons both the Brown River and Moolayember Creek flow into Lake Nuga Nuga. Standing dead trees in Lake Nuga Nuga are illuminated by campfire in a three-hour exposure (taken on on slide film). All photographs in this post by Robert Ashdown unless credited otherwise. Lake Nuga Nuga varies in size with the seasons. Nuga Nuga National Park lies adjacent to the lake’s northern banks, but does not include the lake itself. Looking east over Lake Nuga Nuga toward the Expedition Range.

Human-made earthquakes reported in central U.S 9 Old-Timey Animal Photos You Won't Believe Are Real In the old days, concepts like safety, animal rights and sanity weren't as well-defined as they are now. And while there's no question that we treat animals better today than we did a few decades ago, sometimes what's good for the animals is bad for the field of insanely badass photography. So, we'll just have to fill that void with old-timey photos like these. #9. Gus Waldorf / Life"And in the red corner ... oh God, ALL of the blood. Allow us to introduce the fighters of this 1949 bout: In the blue corner, Gus Waldorf, a boxer so distinguished that this picture is literally all he's known for. Since they followed boxing protocol as opposed to the bear's preferred combat style of straight up mauling everyone, its teeth and claws were restricted with a muzzle and boxing gloves. Gus Waldorf / LifeAlso the bear was a southpaw, which put him right off his game. This was not an isolated incident, by the way -- bear-fighting was apparently all the rage back in the day. #8. #7. #6. #5.

Why do we believe in electrons, but not in fairies? by Benjamin Kuipers No one has directly observed either electrons or fairies. Both of them are theoretical constructs, useful to explain observations that might be difficult to explain otherwise. The "theory of fairies" can actually explain more things than the "theory of electrons". So why do we believe in electrons, but not in fairies? Is the issue a political one, where the "electron" fans got the upper hand in the nineteenth century, so by the twentieth century the "fairy" fans were a scorned and persecuted minority? No, to both. Fairies are much more free. It's always possible that there really are fairies. The scientific method is an amazing procedure for incrementally improving certain kinds of theories: those that make testable predictions. The theory of evolution is a scientific theory, because it implies a large number of specific testable claims. The theory of intelligent design could be true. The scientific method is an enormous intellectual asset to the human race.