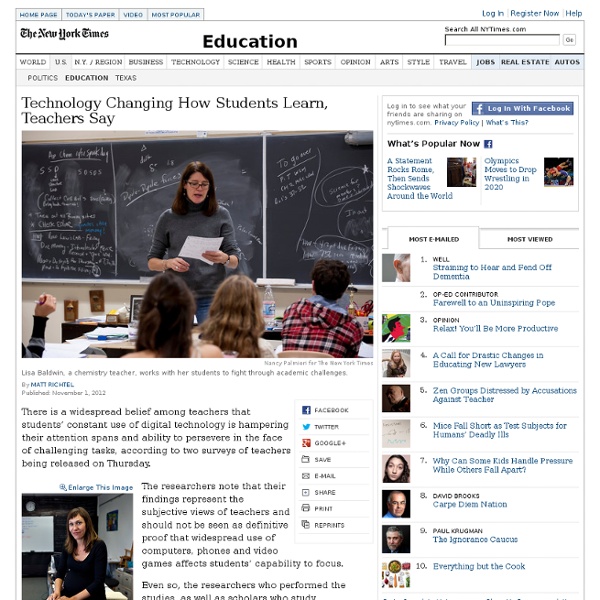 The researchers note that their findings represent the subjective views of teachers and should not be seen as definitive proof that widespread use of computers, phones and video games affects students’ capability to focus. Even so, the researchers who performed the studies, as well as scholars who study technology’s impact on behavior and the brain, say the studies are significant because of the vantage points of teachers, who spend hours a day observing students. The timing of the studies, from two well-regarded research organizations, appears to be coincidental. One was conducted by the Pew Internet Project, a division of the that focuses on technology-related research. The other comes from Common Sense Media, a nonprofit organization in San Francisco that advises parents on media use by children. Teachers who were not involved in the surveys echoed their findings in interviews, saying they felt they had to work harder to capture and hold students’ attention. “I’m an entertainer. Dr. Related:  My Generation(s) • Tecnologia • Articles and Information

Hipsters and Low-Tech Hipsters have been much discussed on the Cyborgology blog (see: here, here, here, and here). Cyborgology authors have also talked about the fetishization of low-tech/analog media and devices (see: here and here). As David Paul Strohecker pointed out, these two issue interrelated: “hipsters are at the forefront of movements of nostalgic revivalism.” Nathan Jurgenson and I were discussing why low-tech devices have a seductive quality. Žižek is often cited as the philosopher of the hipster or the hipster philosopher, but, here, I argue that Simmel and Deleuze were the true Oracles of Hipsterdom. So, hipsters are the product of a moment in history where the socio-economic system benefits from and has discovered effective methods to enforce the moral imperative to “be unique.” How does this relate to technology then? Low-tech is also about a form of authenticity.

Maria Popova: why we need an antidote to the culture of Google | From the Observer | The Observer You describe yourself as a "curator of interestingness" and run a website from New York called Brain Pickings, which covers all things curious and inspiring – books, art, science, photographs etc. What's the common denominator for publishing something? If something interests me and is both timeless and timely, I write about it. Much of what is published online is content designed to be dead within hours, so I find most of my material offline. With 1.2 million readers a month and 3m page views, your site would be a good place to advertise, but, instead, you ask readers for voluntary contributions. There's a really beautiful letter that a newspaper journalist named Bruce Bliven wrote in 1923 to his editor. Why do people pay for what they can get for free? Part of it is that people form an emotional relationship with the site and have a sense of belonging and take pride in being able to support something they enjoy. Contribution-based podcasts and websites are becoming more common. I do.

This Is How You Sell Books In The Digital Age Penguin Books turns 80 this year. To celebrate its birthday, the British imprint of the world’s largest publishing house is releasing a new series of 80 books, entitled Little Black Classics, to be sold for just $1 each on Kindle and as paperbacks. To introduce Little Black Classics, freelance designer Mathieu Triay created a clever and addictive interactive website. The site is a rare example of an old-school publishing house using savvy web design to stay current. The "Spin a Penguin" idea came from Penguin community manager Claudia Toia, who wanted the 80th-anniversary campaign to have a digital component. In designing the circular interface, Triay took inspiration from the iPod's clicking wheel. Go here to play around with the Little Black Classics website.

Edtech Tools Get Creative With Formative Assessments How can you prepare students for workplace experiences that don’t exist yet? As an educator in this digital age, that’s one of my biggest challenges. Our students now in elementary school have never had a time in their lives where mobile technology wasn't present. Look at the most innovative technology we have today: iPhone, ChromeBook, Galaxy Note, iMac, or whatever your favorite tool might be. You are literally looking at the worst piece of technology our students will see in their lifetime. As the second half of the school year begins, educators around the world share a common focus on preparing our students for standardized testing. The real test is finding ways to truly get your students excited about learning and showing what they know in non-traditional ways. Kahoot.it: This is a free, game-based classroom response system. Flipgrid: Although Flipgrid is not free, it is affordable--teachers pay as little as $0.22 per student.

The Cheapest Generation - Derek Thompson and Jordan Weissmann In 2009, Ford brought its new supermini, the Fiesta, over from Europe in a brave attempt to attract the attention of young Americans. It passed out 100 of the cars to influential bloggers for a free six-month test-drive, with just one condition: document your experience online, whether you love the Fiesta or hate it. Young bloggers loved the car. Don’t blame Ford. Adulthood, Delayed The Great Recession changed young Americans' attitudes about what it means to be an adult.by Derek Thompson In a bid to reverse these trends, General Motors has enlisted the youth-brand consultants at MTV Scratch—a corporate cousin of the TV network responsible for Jersey Shore—to give its vehicles some 20-something edge. Perhaps. Since World War II, new cars and suburban houses have powered the economy and propelled recoveries. Half of a typical family’s spending today goes to transportation and housing, according to the latest Consumer Expenditure Survey, released by the Bureau of Labor Statistics.

51 Breakthrough Technologies To Defeat Poverty Simple technologies like Kenya's M-Pesa mobile money system can have a huge impact in the developing world. Offering something genuinely new, reliable and, above all, cheap, they can stitch together communities, catalyze markets, improve economies, and ultimately change lives. So here's the question: What other technologies could have a similar impact? The Institute for Globally Transformative Technologies (LIGTT) at the Lawrence Berkeley National Lab has been thinking about that and recently published 50 Breakthroughs: Critical scientific and technological advances needed for sustainable global development. "They represent breakthroughs because they have to be dramatically different from existing technologies in industrialized settings: available at a fraction of the cost, requiring only a fraction of the energy, significantly less reliant on technical skills to operate, not needing elaborate infrastructure, and being generally robust and maintenance-free," says the report. Health Water

Stop Shouting, Start Engaging: The Power of Variable Viewbooks It was almost as if they didn’t want me to apply. The experience was frustrating, confusing, and legitimately exhausting. As I clicked the red “x” button in the top left corner of my browser (yes, I’m an Apple guy), I left University X’s website more confused than when I had first arrived. I distinctly remember throwing my hands in the air and then turning to a friend of mine (who was also checking out the websites of the schools he was interested in) and saying, “You’d think by now colleges would get it! Maybe my reaction was childish. Similar to my own generation, Generation Z (or whatever we’re calling them!) Today, more so than ever before, you need tools that will meet the needs and expectations of “the modern high-school prospect”. I know what you’re thinking (I may be a marketer by day, but I’m a psychic by night), “Zach, this is a nice idea, but something like this doesn’t exist. Let’s talk about Variable Viewbooks. What if you tried a new approach? (image source: AES Education)

Did I Abandon My Creative Class Theory? Not So Fast, Joel Kotkin The documentary ‘When the Garden Was Eden,’ premiering at the Tribeca Film Festival, focuses on the ‘70s New York Knicks, and how the basketball team served as a refuge for a city plagued by crime. “Now here comes Willis... and the crowd is going wild!” That was Marv Albert’s call on the radio for Game 7 of the 1970 NBA Finals, and even though New York City is seen as some kind of secularist’s utopia or dystopic hellscape depending on your point of view vis-à-vis organized religion, Reed’s entrance is practically a shibboleth for Gotham basketball fans; flash a few stills from the grainy TV footage, and the entire gloriously improbable tale comes spilling out in gushing, reverent tones, as if retelling the deeds of saints. The New York Knicks and the Los Angeles Lakers were tied at three games apiece, but Knicks Captain Willis Reed had suffered a torn muscle in his right thigh during Game 5, and skipped Game 6 entirely. As Araton wrote: Jackson himself wasn’t exempt. But there is hope.