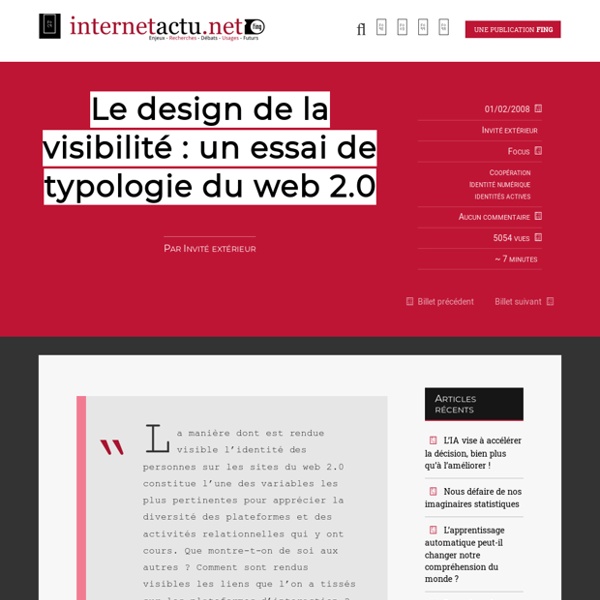 10 Niche Social Networks You've Never Heard Of Are you tired of friends who clutter up your Facebook feed with stuff you don't care about? Are you easily overwhelmed by the wide variety of information posted on Twitter on a daily basis? Is the Google+ population just not doing it for you? If you're looking for a social experience that caters to your specific interests, take a peek at these 10 niche networks you may not have heard of. The tone of life on social networking sites The tone of life on social networking sites The overall social and emotional climate of social networking sites (SNS) is a very positive one where adult users get personal rewards and satisfactions at far higher levels than they encounter anti-social people or have ill consequences from their encounters. A nationally representative phone survey of American adults finds that: 85% of SNS-using adults say that their experience on the sites is that people are mostly kind, compared with 5% who say people they observe on the sites are mostly unkind and another 5% who say their answer depends on the situation. 68% of SNS users said they had an experience that made them feel good about themselves. 61% had experiences that made them feel closer to another person. (Many said they had both experiences.) 39% of SNS-using adults say they frequently see acts of generosity by other SNS users and another 36% say they sometimes see others behaving generously and helpfully.

The Verticalization Of Professional Networks Begins: Is It A Threat To LinkedIn? This note is from BI Research, a new tech-industry intelligence service. The service is currently in beta and free. To learn more and sign up, please click here. Business Insider Research Teens, kindness and cruelty on social network sites Social media use has become so pervasive in the lives of American teens that having a presence on a social network site is almost synonymous with being online. Fully 95% of all teens ages 12-17 are now online and 80% of those online teens are users of social media sites. Many log on daily to their social network pages and these have become spaces where much of the social activity of teen life is echoed and amplified—in both good and bad ways. We focused our attention in this research on social network sites because we wanted to understand the types of experiences teens are having there and how they are addressing negative behavior when they see it or experience it.

Google Buys Jambool: Social Networking Battle Begins Google has purchased virtual currency platform Jambool, a move that will fuel Google's reported foray into the social networking world. Jambool's Chief Executive Vikas Gupta and Chief Technology Officer Reza Hussein confirmed the deal Friday on the company's website. "We are excited to announce that Jambool is becoming a part of the Google family today," the founders write. They add, "The game has only just begun." Jambool started up in 2006 and a year later shifted its focus toward social networking sites by creating a virtual currency platform called Social Gold.

This year, standalone social business software will die This is a guest post by entrepreneur Alastair Mitchell Think of standalone social business software like a point-and-shoot camera. Cameras are perfectly suited for achieving one singular thing: taking a picture. Now, pick up your mobile phone. Right there, jammed into just four ounces, is a camera that not only rivals many point-and-shoots when it comes to picture taking, it can do so much more. Designing For The Multifaceted User Advertisement Designing with users in mind is a tricky thing. Not only does it require of us a sound understanding of who our users are, but the actual act of translating what we know about them into a well-designed product is not always an obvious or easy path.

Beyond Craigslist: 10 Sites for Apartment Hunters If you've ever looked for an apartment to rent online, chances are you've had a go at Craigslist. Though it's possible to score a home run on the Internet's main hub for local offerings, you're likely to be bogged down by Craigslist's rampant spam and heavy traffic, which rapidly snatches up legitimate listings. SEE ALSO: 7 City Parking Apps to Save You Time, Money and Gas

Social Media Platform, Community CMS - Sitecore Drop the monologue and start conversing with your visitors. With Sitecore, you can: Connect with customers at every stage of the lifecycle using built-in functionality for blogs, wikis, forums, polls, surveys, web forms, and more Integrate leading social media platforms such as YetAnotherForum and Zimbra Gain visibility for your brand with social sharing controls as well as automated social site user authentication and integrations to Twitter, Facebook and more Combine Your Web and Social Media Strategies