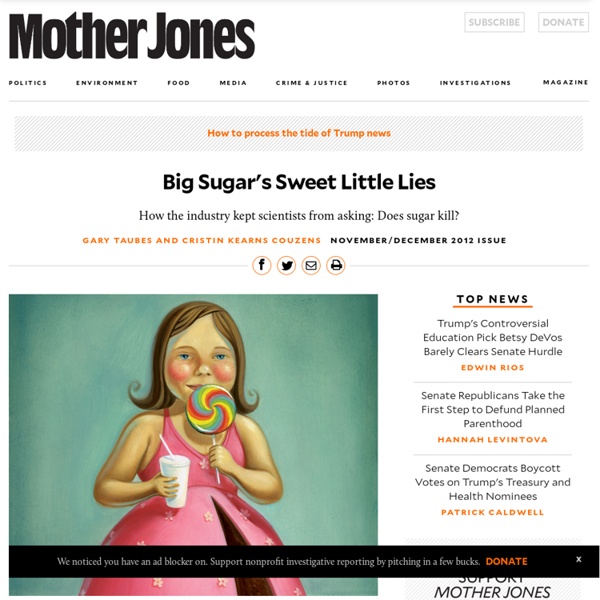 Chris Buzelli On a brisk spring Tuesday in 1976, a pair of executives from the Sugar Association stepped up to the podium of a Chicago ballroom to accept the Oscar of the public relations world, the Silver Anvil award for excellence in "the forging of public opinion." The trade group had recently pulled off one of the greatest turnarounds in PR history. For nearly a decade, the sugar industry had been buffeted by crisis after crisis as the media and the public soured on sugar and scientists began to view it as a likely cause of obesity, diabetes, and heart disease. Their winning campaign, crafted with the help of the prestigious public relations firm Carl Byoir & Associates, had been prompted by a poll showing that consumers had come to see sugar as fattening, and that most doctors suspected it might exacerbate, if not cause, heart disease and diabetes. Precisely how did the sugar industry engineer its turnaround? The industry followed a similar strategy when it came to diabetes. Related:  Obesity • Diabetes ARTICLES & VIDEOS

The Inequality That Matters - Tyler Cowen The Costs of Green Dreams The environmental and economic costs of Germany’s decision to shut down its nuclear reactors are growing. Wealth of nations India’s Hindu temples have huge stores of gold sitting idle outside the banking system. Don't Cry to Me Argentina The President tells her people (and the web): “Everything has to do with everything.” Culture Wars Chinese scientists are facing a big backlash for an unethical experiment that edited the DNA of embryos—a historical first. Putin's Prospects Russian workers who have gone without pay due to the economic troubles are protesting at the national scale. The Afterparty Rages On Libya’s failure becomes a campaign issue in the UK.

Top 17 Low-Carb & Paleo Doctors With Blogs Some people give me weird looks when I say something about nutrition that doesn’t fit with the conventional wisdom they have believed all their lives. But I’ve learned pretty much all of it from other experts that are way more knowledgeable than me. There are a whole bunch of doctors, scientists, professors and various experts all around the world who also believe that a low-carb, paleo type of diet is a better option. Here are 17 low-carb and paleo friendly medical doctors who have their own blogs and websites. The list is in no particular order. 1. Dr. He was one of the key players in bringing the low-carb, high-fat revolution to Sweden. 2. Dr. She seeks evolutionary solutions to modern mental health problems and reviews various studies related to the subject on her site, Evolutionary Psychiatry. 3. Dr. His latest book is called Escape the Diet Trap. 4. Dr. They are the authors of the Protein Power series of books. 5. Dr. 6. Dr. 7. Dr. Advertisement 8. Dr. 9. Dr. 10. Dr. 11. Dr. 12. Dr.

About Me I am a physician trained in internal medicine, nephrology, and obesity medicine in St. Petersburg, FL. I graduated from Emory University School of Medicine in 1986 and completed an internship and residency in internal medicine at The Emory University Affiliated Hospitals program in 1989. So, I abandoned the carbohydrate counting and just tried to keep the intake of carbohydrates constant with each meal. In 2007, I decided to start exercising since I knew I had a chronic disease that might be helped by regular exercise. I have combined the concepts of both of these diets for myself. I have seen improvements in many patients including weight loss, improved glucose control, and stabilization of kidney function in patients with diabetic nephropathy with a low carbohydrate or ketogenic diet. This study examined the effects of a ketogenic diet prescribed to 48 type 1 diabetics in Sweden who were followed for four years. What Does Dr Runyan Eat? 1. 2.

Algeria, Mali, and why this week has looked like an obscene remake of earlier Western interventions - Comment - Voices And there you have it. Our dead men didn't matter in the slightest to him. And he had a point, didn't he? For we are outraged today, not by the massacre of the innocents, but because the hostages killed by the Algerian army - along with some of their captors - were largely white, blue-eyed chaps rather than darker, brown-eyed chaps. If all those slaughtered in the Algerian helicopter bombing had been Algerian, we would have mentioned the "tragic consequences" of the raid, but our headlines would have dwelt on the courage and efficiency of Algeria's military rescuers, alongside interviews with grateful Western families. Racism isn't the word for it. So you know whom we care about. From the Middle East, the whole thing looks like an obscene television remake of our preposterous interventions in other parts of the world. I called up another friend, a French ex-legionnaire, yesterday. Do I sniff a bit of old-fashioned colonial insanity here?

List Of Low-Carb Doctors Bret Michaels: "Face of Diabetes", Defeatist Shout Out - Diabetes Warrior Bret Michaels is in the news due to complications from Type 1 diabetes. First: I hold no animosity for the man Bret Michaels. I love his zest for life. I have compassion and sympathy for him. I wish I could show him a ‘better way’ to self-treat his diabetes via the teachings of Dr. Bernstein. However … that’s where the niceties end. This post is an honest appraisal of his ‘fight with diabetes’ and a shout out to him to ‘do the right thing’. The picture top right is a picture of Bret doing the rocker ‘thang’. Bret Michaels has allowed the American Diabetes Association, hell he’s allowed the entire diabetes industry to hold him up as a role model and ‘face of diabetes’. A quote from an ADA website. “To help the Association raise awareness about the seriousness of diabetes and the importance of prevention and control, Bret is representing the “Face of Diabetes” …” Bret Michaels is not a diabetes warrior .. he is a diabetes defeatist. ALSO … note the statement in the quote, Bret is helping … Dr.

?So many people died? Pham To looked great for 78 years old. (At least, that’s about how old he thought he was.) His hair was thin, gray, and receding at the temples, but his eyes were lively and his physique robust — all the more remarkable given what he had lived through. Pham To told me that the planes began their bombing runs in 1965 and that periodic artillery shelling started about the same time. And it only got worse. One, two… many Vietnams? At the beginning of the Iraq War, and for years after, reporters, pundits, veterans, politicians, and ordinary Americans asked whether the American debacle in Southeast Asia was being repeated. The same held true for Afghanistan. In those years, “Vietnam” even proved a surprisingly two-sided analogy — after, at least, generals began reading and citing revisionist texts about that war. An unimaginable toll Pham To was lucky. The numbers are staggering, the suffering incalculable, the misery almost incomprehensible to most Americans but not, perhaps, to an Iraqi.

NuSI A Randomized Pilot Trial of a Moderate Carbohydrate Diet Compared to a Very Low Carbohydrate Diet in Overweight or Obese Individuals with Type 2 Diabetes Mellitus or Prediabetes Exclusive: Billionaires secretly fund attacks on climate science - Climate Change - Environment A secretive funding organisation in the United States that guarantees anonymity for its billionaire donors has emerged as a major operator in the climate "counter movement" to undermine the science of global warming, The Independent has learnt. The Donors Trust, along with its sister group Donors Capital Fund, based in Alexandria, Virginia, is funnelling millions of dollars into the effort to cast doubt on climate change without revealing the identities of its wealthy backers or that they have links to the fossil fuel industry. However, an audit trail reveals that Donors is being indirectly supported by the American billionaire Charles Koch who, with his brother David, jointly owns a majority stake in Koch Industries, a large oil, gas and chemicals conglomerate based in Kansas. Millions of dollars has been paid to Donors through a third-party organisation, called the Knowledge and Progress Fund, with is operated by the Koch family but does not advertise its Koch connections.

Experts: Eat More Fat Credit: Iain Bagwell / Getty Images For more than half a century, the conventional wisdom among nutritionists and public health officials was that fat is dietary enemy number one – the leading cause of obesity and heart disease. It appears the wisdom was off. And not just off. Almost entirely backward. According to a new study from the National Institutes of Health, a diet that reduces carbohydrates in favor of fat – including the saturated fat in meat and butter – improves nearly every health measurement, from reducing our waistlines to keeping our arteries clear, more than the low-fat diets that have been recommended for generations. It's not the conclusion you would expect given the NIH study's parameters. RELATED: The High-Fat Diet, Explained One year later, the high-fat, low-carb group had lost three times as much weight – 12 pounds compared with four – and that weight loss came from body fat, while the low-fat group lost muscle. But isn't too much saturated fat bad for your heart?