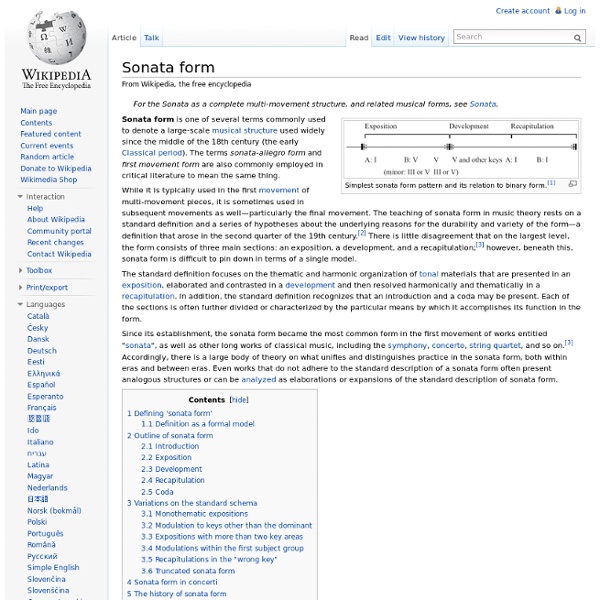 Simplest sonata form pattern and its relation to binary form.[1] Classical sonata form in minor.[2] "Early examples of sonata form resemble two-reprise continuous ternary form."[3] Sonata form (also sonata-allegro form or first movement form) is a large-scale musical structure used widely since the middle of the 18th century (the early Classical period). Since its establishment, the sonata form became the most common form in the first movement of works entitled "sonata", as well as other long works of classical music, including the symphony, concerto, string quartet, and so on.[5] Accordingly, there is a large body of theory on what unifies and distinguishes practice in the sonata form, both within eras and between eras. Defining 'sonata form'[edit] This model was derived from study and criticism of Beethoven's piano sonatas. Definition as a formal model[edit] A sonata-allegro movement is divided into sections. These variations include, but are not limited to: Outline of sonata form[edit] Play

Sonata Form Simplified From the Italian sonare meaning simply "to sound," the sonata has undergone enough changes throughout music history to fill several encyclopedic volumes, as some scholars have indeed given us. Fortunately for us, however, sonata form nearly always refers to a single-movement structure used throughout the Classical period. It's no wonder musical terms are confusing. What's most important about any musical form is not some dry, academic analysis but rather its dramatic implication. Let's take a look at traditional sonata form in the Classical era. Let's review: if it was written more or less between Mozart's birth and Beethoven's death, has several movements, the first of which is in sonata form, and is written for just one or two instruments, it's called a "sonata"... but if it's written for a full orchestra it's called a "symphony." I know that's confusing, but bear with me and I promise to simplify things. Exposition The exposition introduces the main themes. Development Recapitulation

History of sonata form Sonata form is one of the most influential ideas in the history of Western classical music. Since the establishment of the practice by composers like C.P.E. Bach, Haydn, Mozart, Beethoven, and Schubert and the codification of this practice into teaching and theory, the practice of writing works in sonata form has changed considerably. Late Baroque era (ca 1710 – ca 1750)[edit] Classical era (ca 1750 – ca 1820)[edit] The older Italian sonata form differs considerably from the later sonata in the works of the Viennese Classical masters.[1] Between the two main types, the older Italian and the more "modern" Viennese sonata, various transitional types are manifest in the middle of the 18th century, in the works of the Mannheim composers, Johann Stamitz, Franz Xaver Richter, C.P.E. The piano sonata had its inception with Johann Kuhnau, the predecessor of J.S. The practice of the great Classical masters, specifically Haydn and Mozart, forms the basis for the description of the sonata form.

Putt into Definition and Explanations".