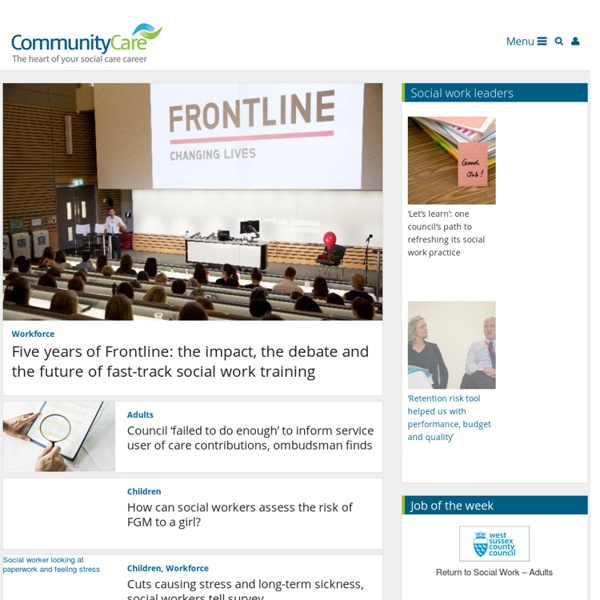 The Social Issue | people, places and projects The Broken Of Britain Human Thinking Together Infographic: How the Top 50 Nonprofits Do Social Media "By luck, I stumbled upon your site, and of course I wanted to try it out. I went on to deposit $500 on OneTwoTrade, then opened 5 positions and won 4. Took out the $500 and still have the profit of $288 to trade with. This is a great system you got there Sir, I definitely owe you one." Shelly Green - New York "I began with $200 on OneTwoTrade and I went down to $100 the first day. John Bates - Los Angeles "I didn't know what to think about this system at first, as I have always looked at trading as too complicated and only for professionals... obviously I was wrong. Julia Moore - Chicago "Just started trading binary options a month ago. Scott Parker - Miami

How do you measure the relationship between a social worker and a child? - 10/13/2011 Children’s services are being urged to focus on outcomes, but Judy Cooper asks how can success be gauged Outcome (noun): A final product or end result; consequence; issue. The dictionary explanation is simple enough. The mistake made, according to Rob Hutchinson, a former director of children’s services at Portsmouth and now an independent consultant, was that measures of achievement were in the form of either counting numbers (how many teenage parents there were) or efficiency measures (how many initial assessments had been completed in 10 days). “These measures can be important but they mean nothing if you are not also measuring a third factor: are children better protected? “Consequently we measured what was easy to measure but it filtered down as must-do targets for managers and workers at the expense of time spent with families.” The Munro Review of Child Protection called for a renewed focus on improving outcomes for each child. ● Have I treated you well? ● Have I made a difference?

Barber secretly shaved 'fool' on back of man's head, court told | UK news A barber shaved the word "fool" in 1in letters on the back of the head of a man with severe learning difficulties, a court has been told. Michael Campbell, 35, who has no formal qualifications in hairdressing, had been working at Jam Cuts, in Stapleton Road, Bristol, for just three weeks when Michael Ricketts walked into the salon on 11 February. Ricketts, 49, has communication difficulties and was described at the court as a "vulnerable adult" who mumbled his words and was difficult to understand. Bristol magistrates heard that he went into the barber's and asked to have a pattern shaved into his hair. Unbeknown to him, Campbell allegedly shaved the word "fool" with a smiley face underneath, the prosecution claimed. Giving evidence, Campbell said Ricketts had asked for a pattern and that he had shaved the word "cool", which had then been misinterpreted. Campbell denies a charge of assault and one charge of failure to answer bail. The case continues.

United Response » Blog Archive » Kaliya Franklin and United Response collaborate on Labour conference easy read doc • Wednesday, October 12th, 2011 In partnership with disability activist Kaliya Franklin, we have released an easy read version of the conversation she had at the recent Labour Conference with Ed Miliband. You can download the full document here, as a PDF (1.79MB). Kaliya’s questions centred on disability, sickness and work. You can see the footage of their encounter below. As already demonstrated in our Every Vote Counts campaign and the recently re-released Moving on and Planning Ahead guide, we believe that making important material accessible to everybody – including those with disabilities – is a crucial element in the fight against inequality. We’ll be returning to the importance of making democracy and politics accessible to all shortly, so please stay tuned. James Dodd, web and digital media editor.

Social life blog: Why social work beats lifestyle management | Social care network | Guardian Professional Two years ago, the words 'social work' were not active in my vocabulary. I worked in an enjoyable job at a lifestyle management company, organising the lives of people who lacked the time to do so themselves. In September 2009 that changed, when I started a two year social work masters course at Hertfordshire University. People often ask me about what I learnt from my course - it was a topic of conversation with other students upon completing our studies this summer. To my surprise, law became my favourite module and, as I moved in my second year to working in a statutory setting, I reached a point where it all finally clicked. My main advice when advising others on how best to advance their learning and understanding, particularly in a field so complex as social work: question everything. I didn't enter social work to devote myself solely to local authority work, but from working in that setting, I can see the benefits and the enormous number of skills that can be learnt.

The 'big society' Work Programme (and other myths) | Society There's an astonishing Radio Five Live interview with work and pensions secretary, Iain Duncan Smith, in which he is asked what he is doing for the "big society". Quick as a flash, he replies: "I've created the Work Programme, which is all about the voluntary and private sector." His words, recorded last week at the Conservative Party annual conference, suggest Duncan Smith is either deluded, or being kept in the dark by his officials. In my Society Guardian column today I drew on the findings of survey-based reports by the Association of Chief Executives of Voluntary Organisations (Acevo), and the London Voluntary Services Council (LVSC). They all reach the same conclusions: that the corporate prime contractors are exploiting or excluding their voluntary sector and social enterprise subcontractors, putting many at risk of going bust. "There is a need to monitor what VCS organisations are ending up contributing to the Work Programme for no or inadequate payment. "St.

'Abuse' of Bristol man with Alzheimer's is caught on spy camera CARERS have been accused of "neglect and abuse" of an 85-year-old man with Alzheimer's, after his family used secret cameras to film their "shocking" behaviour. Carol-Anne Norman was concerned about the way her vulnerable father was being cared for by Avon Home Carers, a service part-funded by Bristol City Council. So they set up hidden cameras in his home, recording what they have described as "distressing footage". The video, seen by the Evening Post, shows the pensioner in distress after he soiled himself and was left unwashed. Another piece of film shows him walking into the bathroom and attempting to wash himself but there is no sign of his carer helping him. Instead the footage shows the carer running water over the toothbrush and sponge, before wiping a towel around the sink and sprinkling talcum powder around the room, as if to make it look as though her duties had been carried out. Avon Home Carers and the city council have confirmed that an investigation is being carried out.

Live online debate: Does higher education prepare social workers for employment? | Social care network | Guardian Professional Should there be a greater emphasis on work-based practice in social work education? Photograph: Christopher Furlong/Getty Images Social work degrees, like many higher education courses, are oversubscribed with thousands of university leavers struggling to find jobs in the profession. According to figures from the British Association of Social Workers (BASW), 25%, of those who graduated in June have yet to find work and universities frequently struggle to find placements for undergraduates. Last week, newly qualified social worker Zoe Betts wrote a piece on Guardian Social Care Network's Social Life blog about her experience of a two year masters course: "People often ask me about what I learnt from my course - it was a topic of conversation with other students upon completing our studies this summer. But do the courses prepare trainee social workers for a career in the industry? Are courses teaching the right skills? Claire Barcham, practice development advisor, College of Social Work

ripfa.org Previously one-to-one support. In addition to our scheduled delivery programme of resources and events we offer tailored support to organisations, including local authorities, Clinical Commissioning Groups, third sector providers or any type of organisation involved in the design or delivery of adult social care or aligned services. Partners receive 20 hours of tailored support as part of their membership but it can also be purchased separately. If you would like to discuss tailored support options, please contact help@ripfa.org.uk. We work in partnership to develop a package of support which meets the organisational needs and helps the development of staff competence and confidence. Menu workshops We also offer a menu of half-day workshops which we can tailor and deliver to you using just seven hours of your tailored support allowance. Workshop topics for September to March: Training Packages Recent topic areas include: Evidence scope Knowledge exchange Change projects

#1 Love Life and Work A blog carnival is a regular roundup of what the best bloggers in a particular field have been talking about over the previous few weeks. It's a way of grabbing a snapshot of the online conversations that are going on, catching up with news, building up precious linkage (which every blogger craves), finding fresh and new ideas from the freshest and newest blogs and perhaps creating a community of those bloggers who write about a common topic. Freud said that love and work are the cornerstones of our humanity, so I'm starting this blog carnival with a great blogpost about love and the things doctors say: Love Dave Hingsberger's writing has interested and inspired me for a long time. He'd taken my pulse, which he did ever single time he came to see me. Theatre Saba Salman writing in 'The Social Issue' talks about the hard campaigning work that led to a major event at London's Unicorn Theatre around 'Autism Friendly Theatre', and the possibilities of opening theatre up to many more people: 1.

Reflections on #NCASC – let’s start with people For the last three days I’ve been in London for #NCASC – the National Children and Adult Services Conference. A considerable focus of the conference was #integratedcare and the need for #health and #socialcare systems to work closer together, set within the current economic situation and reduction of resources. I think its fair to say that at times at conference you’d have been forgiven for forgetting that what we are all really interested in is improving life for people who need to use health and social care services. I guess that understanding is absolutely implicit, and the challenges are great at the moment, so much so that it would be easy to reach a state of being overwhelmed with the magnitude of the challenge, and disillusioned with what can actually be done. So, I’d like to share a good news story. So what has this got to do with NCASC? Next up on my thought provoking list has to be Richard Jones. Isn’t that all a bit naive and over simplistic? I’d like to think not. Like this: