Virtual Collaboration: The Skills Needed to Collaborate in a Virtual Environment 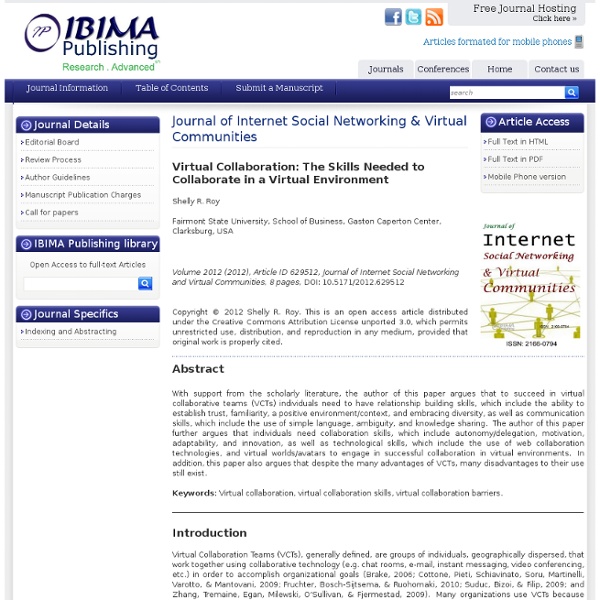 How Successful Virtual Teams Collaborate - Keith Ferrazzi by Keith Ferrazzi | 12:00 PM October 24, 2012 I have worked on many teams in which we dutifully did our jobs, and the group fulfilled its objectives. And then I have worked on other teams in which everyone energetically collaborated with one another, and the results were spectacular. Not only did we surpass our goals, we also thoroughly enjoyed and benefited from that process as individuals. In other words, there’s a world of difference between merely working together and truly collaborating with one another. Achieving true collaboration — in which the whole is definitely more than the mere sum of the individual parts — is difficult in any environment. Adjust for size. Don’t be afraid of social media. The chipmaker Xilinx, for instance, has reported an increase in engineer productivity by around 25% thanks to social media tools that encourage and enable employee collaborative activities. Play games. Train for collaboration. Have role clarity but task uncertainty.

OracleVoice: Seeking Social's ROI? You're Missing The Point Entirely By Meg Bear Businesses have been obsessively trying to find the ROI of social media, which is the completely wrong approach. Don’t get me wrong—it’s not that you shouldn’t measure the impact of social media; but the measurement should be a business one, not a measure of social alone. Social is an enablement tool, not a standalone channel. And its true value comes in the ability to enable your business. Merriam-Webster defines enable as “to provide with the means or opportunity; to make possible; to cause to operate.” Great companies have already begun using social to innovate more quickly and more effectively. General Motors is developing better automobiles by seeking customer input, as well as making product adjustments on the assembly line by listening to social conversations. Marriott International created an award-winning marketing promotion based on a customer remark on social media informing the hotel that its beds were a customer favorite. Source: iStockphoto

About DAW – What is DAW? Democracy at Work is a project, begun in 2010, that aims to build a social movement. The movement’s goal is transition to a new society whose productive enterprises (offices, factories, and stores) will mostly be WSDE’s, a true economic democracy. The WSDEs would partner equally with similarly organized residential communities they interact with at the local, regional, and national levels (and hopefully international as well). That partnership would form the basis of genuine participatory democracy. Utilizing media, from short video clips that go viral to our already well-established weekly and increasingly syndicated “Economic Update” radio program (WBAI, 99.5 FM, New York) and from podcasts to articles to blogs, this interactive website reaches and engages a fast growing audience. Workers’ Self-Directed Enterprises (WSDE’s): WSDE’s are enterprises in which all the workers who collaborate to produce its outputs also serve together, collectively as its board of directors.

Mobile games used for psychology experiments (Medical Xpress)—Initial findings from one of the largest cognitive science experiments ever conducted have shown that mobile games can be used to reliably address psychology questions, paving the way to a better understanding of how cognitive function differs across populations. With its first comprehensive set of results published today, the Great Brain Experiment, a free mobile app run by neuroscientists at the Wellcome Trust Centre for Neuroimaging at UCL, uses 'gamified' neuroscience experiments to address scientific questions on a scale that would not be possible using traditional approaches. The app investigates memory, impulsivity, risk-taking and happiness. The results, published in the journal PLOS ONE, demonstrate that mobile games can be used to reliably conduct research in psychology and neuroscience, reproducing well-known findings from laboratory studies. Explore further: New games added to The Great Brain Experiment

Home » The Cooperative Foundation VA's Telemental Health Efficacy Surpasses Face-to-Face Encounters : Current Psychiatry PHILADELPHIA – The rapidly growing telemental health program of the U.S. Veterans Affairs health care system delivered more effective mental health services to nearly 100,000 patients than standard, face-to-face encounters during 2007-2010, demonstrated by its slashing the rate of psychiatric hospitalizations. "This is the first large-scale study to show that telemedicine dramatically reduced hospital admissions and total hospitalized days," Dr. Linda S. Godleski said May 6 at the annual meeting of the American Psychiatric Association. She and her associates reviewed 98,609 VA patients who required mental health services and were new to the agency’s telemental health program during 2007-2010. These shifts were specific to patients who entered the telemental health program. In her talk, Dr. The results from prior VA studies proved that telemental health was noninferior to face-to-face encounters, leading to the burgeoning program. Dr.

New Cooperative Development B. Henehan. Authors: Brian Henehan, Cornell University, bmh5@cornell.edu, and Bruce Anderson, Cornell University Reviewers: Gerald White and Brent Gloy, Cornell University Summary: There is increased interest in economic alternatives as individuals try to adopt needed technology and compete in today's dynamic global markets. Introduction to New Cooperative Development The social and economic history of the world records innumerable cases of individuals on all continents utilizing collective action to address common social and economic problems by forming cooperatives. Collaborative business groups can be organized in a variety of ways, linking companies together in a larger, overarching relationship for a common purpose. While such membership organizations are known by a variety of names, in general they may be logically classified as networks, alliances or cooperatives. Motivation to Start a Cooperative Distinctive features of a cooperative come into play right from the start.

Making Remote Work Work Christopher Groskopf’s Tricks for Going to the Office without Going to the Office For the last two-and-a-half years I’ve been a 100% remote worker, first on PANDA Project and now with NPR visuals. Recently, several people have asked me how I make this work. My view for NPR visuals 10:00 am (ET) scrum. In this piece, I’ll codify some of the lessons I’ve learned. What my coworkers see. Staying organized It goes without saying that if you’re going to be apart from your team, you need to take responsibility for your own organization. In lieu of these contextual, human reminders, you’re going to need to rely on systems to help you remember. Pro tip: if you’ve got school-age kids, schedule yourself for the half-hour they get out of school for the next ten years. Get yourself a nice multi-timezone clock. The flip-side of this is that you’ll often be scheduling meetings for a group of folks who aren’t remote. Staying in communication Remote-work gear worth having Staying motivated

In focus: The art of collaboration Gone are the days of dirty tricks campaigns and bitter rivalries, it’s all healthy competition and shared learnings, right? On a recent trip to one of New York’s biggest co-working spaces Virgin put the question to its founder – where has this spirit of collaboration come from and what happened to the old attitudes? "Why don’t you ask Uber and Lyft about that one? Our latest in focus topic will assess the state of collaboration in 2014 – the good, the bad and the ugly. If you’d like to check out our previous In focus topics you can do so by clicking onto: ​Alternatively, if there’s a burning issue in the world of entrepreneurship that you’d like put under the microscope, then just let us know below...

Isolation: The New Innovator’s Dilemma It’s can be a long, lonely climb Innovators transform the world around them in big and small ways and while a successful effort can be lauded by pundits, politicians and the public there is a long road to making change happen. That road is also a lonely one and doing things different means more than just innovating and experiencing what it means to be resilient firsthand. Clayton Christensen’s seminal book The Innovator’s Dilemma has been one of the leading sources of thinking-inspriation in business and social innovation. The book reflects the challenges with those seeking to introduce new ideas, products or services into established markets (or ecosystems) in the aim of addressing both people’s present and future needs. These innovators — change-makers — risk disrupting the very markets they seek to influence bringing uncertainty for everyone. Great spirits have always encountered violent opposition from mediocre minds The lonely lives of leaders Creating deep community Troubled language