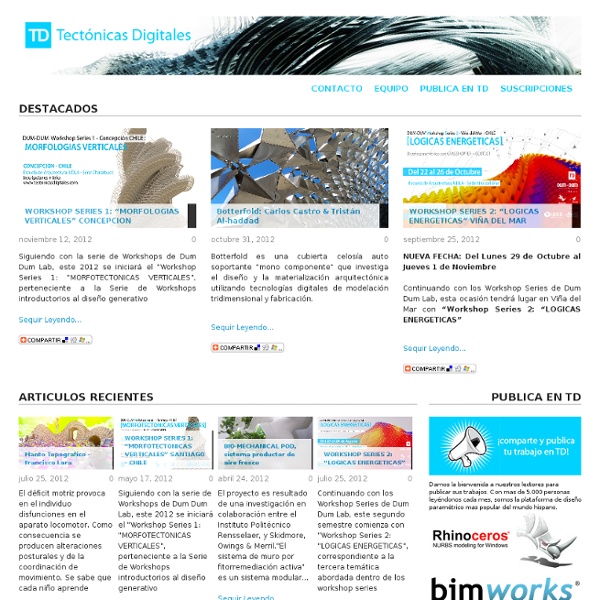 MADEinCALIFORNIA ///Co.De. architecture These are a series of experiments, in which the designer try to use parametric and digital method to realize these interesting optical illusion effects and generate 3d geometry or space rather than just 2d painting. Continue reading The design task of this project was to design a multifunctional theatre inside an old gasholder in the Hague the Netherlands. This project is a renovation of an old monumental building, we apply the new generation process, new material and manufacture method, new structure and construction logic to transfer the old building to a fire new thing with also new functions. In this project, our essential design emphasis focuses on organization of overall rule and open system, rather than on each segments of this project. The intention was to achieve highly varied heterogeneous spatial formations, catering to a wide variety of human activities and programmatic demands. This is a Workshop for Msc 2 Master student of Hyperbody.

ezioblasetti We are the hackers of abstraction. We produce new concepts, new perceptions, new sensations, hacked out of raw data. Whatever we hack, be it programming language, poetic language, math or music, curves or colorings, we are the abstracters of new worlds. Whether we come to represent ourselves as researchers or authors, artists or biologists, chemists or musicians, philosophers or programmers, each of these subjectivities is but a fragment of a class still becoming, bit by bit, aware of itself as such. — A Hacker Manifesto by McKenzie Wark I spend much energy trying to realize situations and occurrences physically before I give in to digital effects. — Barney and Noé discuss River of Fundament PEOPLE: Robert Williams - Geometry + Mathematics we-designs: Robert Edward Williams (born 1942) is an American designer, mathematician, and architect. Now, poetry, as generous as its beauty may be, is indubitably an authoritarian form of declaration. — Badiou, ‘Plato, Our Dear Plato!’

transframing 3DVizART Curve to Surface « PARAMETRIC[ation] _ motion analysed - person walking up stairs There are three curves that were chosen to represent a person walking up a stairs; the motion of each of the legs and the motion of a person’s head. The curves from the legs overlap each other and skip a step each time while the curve from the head is a continuous one that moves in the same motion at each every step. By taking these curves and shifting the top curve down, I have chosen to develop a model that has two different surfaces defined by the head motion on the top and the feat motion on the bottom. _ curve analysis _ grasshopper definition the parameters that are used to drive the surface form are: number of stepsstep risestep runwidth (between left foot and right foot) _ rhino model _ model photos laser cut 3.0mm MDF sections After finding an appropriate form by adjusting the grasshopper parameters, I then baked the model to get usable Rhino geometry. vacuum formed plastic vacuum formed plastic with grid overlay Like this: Like Loading...