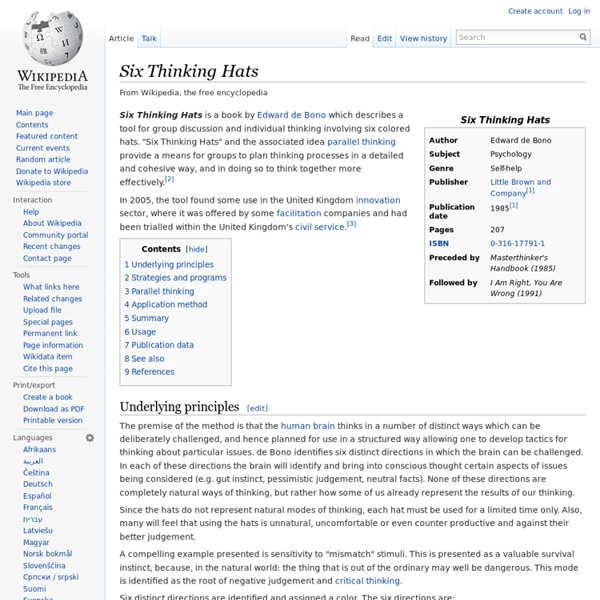 Six Thinking Hats is a book by Edward de Bono which describes a tool for group discussion and individual thinking involving six colored hats. "Six Thinking Hats" and the associated idea parallel thinking provide a means for groups to plan thinking processes in a detailed and cohesive way, and in doing so to think together more effectively.[2] Underlying principles[edit] The premise of the method is that the human brain thinks in a number of distinct ways which can be deliberately challenged, and hence planned for use in a structured way allowing one to develop tactics for thinking about particular issues. de Bono identifies six distinct directions in which the brain can be challenged. In each of these directions the brain will identify and bring into conscious thought certain aspects of issues being considered (e.g. gut instinct, pessimistic judgement, neutral facts). Since the hats do not represent natural modes of thinking, each hat must be used for a limited time only. Summary[edit]

Evaporating Cloud Overview[edit] The most commonly used of the TOC tools,[note 1] the EC was designed to address conﬂict or dilemma situations (trade-off situations where there is no acceptable compromise) by diagramming the logic behind the conflict and methodically examining the assumptions behind the logic. [3] The EC has a set format with five boxes, labelled A, B, C, D, D’, that are usually laid out as follows:[4] The generic structure of an Evaporating Cloud diagram. [B] ← [D ] [A] / ↑ / \ [A] conflict OR [B] [C] \ ↓ ↑ ↑ [C] ← [D’] [D] ↔ [D’] The boxes represent two opposing wants that represent the conflict (D, D’)[note 2], the needs that each want is trying to satisfy (B, C), and a common objective or goal (A) that both needs are trying to fulfil.

P2PU Schools: on "open" structures, HTML, data analysis June Ahn Research Partner June is a human computer interaction researcher at University of Maryland. He was brave enough to get involved with this crowd and is helping us make all our data available to everyone. John Britton Edupunk Bloom's Taxonomy Bloom's wheel, according to the Bloom's verbs and matching assessment types. The verbs are intended to be feasible and measurable. Bloom's taxonomy is a classification of learning objectives within education. It is named for Benjamin Bloom, who chaired the committee of educators that devised the taxonomy, and who also edited the first volume of the standard text, Taxonomy of Educational Objectives: The Classification of Educational Goals.

The Change Cycle by Robert Dilts. To implement the Belief Change Cycle, lay out separate locations for each of the states associated with the 'landscape' of belief change. This essentially involves having the person put himself or herself as fully as possible into the experience and physiology associated with each of these aspects of the natural cycle of belief change and 'anchoring' them to specific spatial locations. 'Wanting to believe' something new. The experience of being 'open to believe' something new. Belief Change Cycles by Robert Dilts People often consider the process of changing beliefs to be difficult and effortful. And yet, the fact remains that people naturally and spontaneously change dozens if not hundreds of beliefs during their life. Perhaps the difficulty is that when we consciously attempt to change our beliefs, we do so in a way that does not respect the natural cycle of belief change. We try to change our beliefs by "repressing" them or fighting with them.

"IQ, Hypnosis, and Genius" IQ, Hypnosis, and Genius Let me give this genius subject a shot. Before I get into what I want to offer in the way of processes, strategies and the like, let me offer this. The word genius is a relative term. One that has, for far too long, been associated with some of the greatest minds that have ever lived. Einstein, Tesla, Mozart, etc.

Linguistics In the early 20th century Ferdinand de Saussure distinguished between the notions of langue and parole in his formulation of structural linguistics. According to him, parole is the specific utterance of speech, whereas langue refers to an abstract phenomenon that theoretically defines the principles and system of rules that govern a language.[9] This distinction resembles the one made by Noam Chomsky between competence and performance, where competence is individual's ideal knowledge of a language, while performance is the specific way in which it is used.[10] In classical Indian philosophy of language, the Sanskrit philosophers like Patanjali and Katyayana had distinguished between sphota (light) and dhvani (sound). In the late 20th century, French philosopher Jacques Derrida distinguished between the notions of speech and writing.[11] Nomenclature[edit]

Portal:Linguistics From Wikipedia, the free encyclopedia Linguistics is the scientific study of language, and is largely divided into two major fields: theoretical linguistics and applied linguistics. Someone who engages in this study is called a linguist. Psycholinguistics Psycholinguistics or psychology of language is the study of the psychological and neurobiological factors that enable humans to acquire, use, comprehend and produce language. [1] Initial forays into psycholinguistics were largely philosophical ventures, due mainly to a lack of cohesive data on how the human brain functioned. Modern research makes use of biology, neuroscience, cognitive science, linguistics, and information theory to study how the brain processes language. There are a number of subdisciplines with non-invasive techniques for studying the neurological workings of the brain; for example, neurolinguistics has become a field in its own right.

Self-Deception People lie all the time even to themselves and surprisingly, it does work! This is the finding of the Quattrone and Tversky social psychology experiment that was published in the Journal of Personality and Psychology. Self-deception is a process of denying or rationalizing away the relevance, significance, or importance of opposing evidence and logical argument. Self-deception involves convincing oneself of a truth or lack of truth so that one does not reveal any self-knowledge of the deception. (Wikipedia)