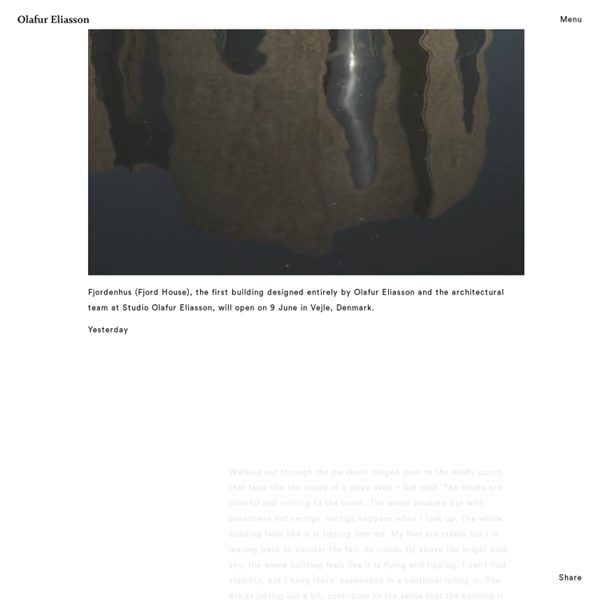 Architecture Wallpaper* newsletter Register for our bi-weekly bulletin of the stuff that refines you By submitting your details, you'll also receive emails from Time Inc. UK, publisher of Wallpaper* and other iconic brands about its goods and services, and those of its carefully selected third parties. Please tick here if you'd prefer not to hear about: Terms and Conditions | Privacy Policy Piet Mondrian Pieter Cornelis "Piet" Mondriaan, after 1906 Mondrian (/ˈmɔːndriˌɑːn, ˈmɒn-/;[1] Dutch: [ˈpit ˈmɔndrijaːn], later [ˈmɔndrijɑn]; 7 March 1872 – 1 February 1944), was a Dutch painter. Mondrian's arrival in Paris from the Netherlands in 1911 marked the beginning of a period of profound change. He encountered experiments in Cubism and with the intent of integrating himself within the Parisian avant-garde removed an 'a' from the Dutch spelling of his name (Mondriaan).[3][4] The Netherlands (1872–1911)[edit]

Olafur Eliasson on tech in art and Berlin's "exceptional people" A “giddy joy” was described as the feeling evoked by the artwork of Olafur Eliasson when we interviewed him for last year’s Autumn edition of Printed Pages, and with his monumental, often participatory pieces, it’s not hard to see why. From his incredible 2003 Weather Project at Tate Modern to its portable, socially-conscious, tiny counterpart Little Sun(which “produces clean, affordable, and portable solar-powered lamps to areas of the world without reliable access to electricity”), his work is a glorious, utterly original ray of light shining on the sometimes impenetrable art world. With Olafur just announced as one of the judges of the Wired and The Space’s Creative Fellowship awards, which selects three emerging digital artists to be given a share of £100,000 to realise their projects, he tells us about his studio, his love of Berlin, and how he reckons emerging artists can best embrace new technologies.

Rebecca Horn - official website Rebecca Horn 1944 Born 1963 Studies at the Hochschule für Bildende Künste, Hamburg Michele Gabriele Reblogged from Paul Barsch’s instagram; a fast look into the BODY HOLES project. BODY HOLES, the third and most elaborate exhibition project by New Scenario, explores the natural orifices of the human body as practical exhibition spaces for art. The show builds on macro shots of artworks by over forty international artists and artist groups, installed in the mouth, nose, ears and more explicit areas. BODY HOLES will be released June 3rd, 2016 as an online exhibition at the 9th Berlin Biennale and can be accessed via the online section “FearOfContent” and newscenario.net. Curated by New Scenario in collaboration with Nuno Patricio (o fluxo)

Francis Bacon Francis Bacon in his studio Francis Bacon (28 October 1909 – 28 April 1992) was an Irish-born British figurative painter known for his bold, graphic and emotionally raw imagery.[1] His painterly but abstracted figures typically appear isolated in glass or steel geometrical cages set against flat, nondescript backgrounds. Bacon began painting during his early 20s and worked only sporadically until his mid-30s. Unsure of his ability as a painter, he drifted and earned his living as an interior decorator and designer of furniture and rugs. Later, he admitted that his career was delayed because he had spent too long looking for a subject that would sustain his interest.[2] His breakthrough came with the 1944 triptych Three Studies for Figures at the Base of a Crucifixion which sealed his reputation as a uniquely bleak chronicler of the human condition. During his lifetime, Bacon was equally reviled and acclaimed.