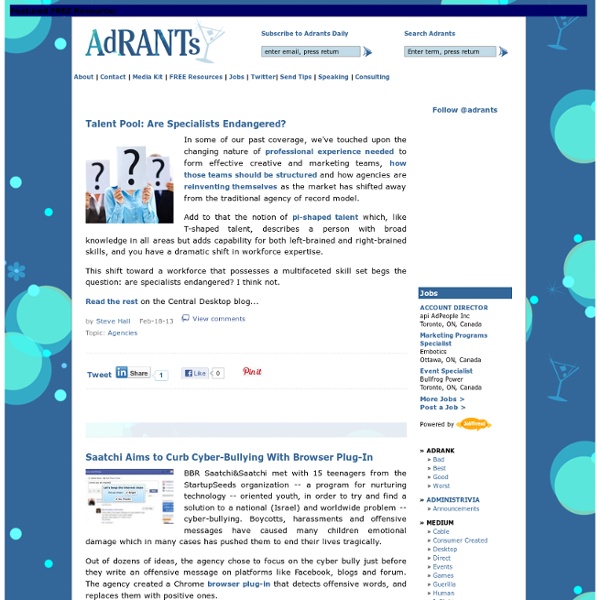 I don't know. Give this next chapter of Bud Light's Up For Whatever entry a view. To me it just comes of as if it were an overzealous ad school student version of the original. If you recall, the brand launched a celebrity-studded version of this ad during the Super Bowl in which the likes of Don Cheadle, Minka Kelly and Arnold Schwarzenneger along with One Republic show one guy an epic night. In this second outing, a couple of guys, Jesse and Luis, get to hang with NBA All Stars Alonzo Mourning, Karl Malone, Penny Hardaway, Bruce Bowen, Darryl Dawkins along with Benny the Bull and experience a basketball lover's dream. It all falls kind of flat.

Marketing, Advertising and Social Media News With Attitude by Steve Hall AdWeek doesn't like the new Miller High ads and neither do we. While Gabriel Beltrone does an exquisite job of explaining why the ads suck, we'll be more blunt. They come off like some copywriter's hipsterific dream of cool as defined by a sort of fuck you sensibility to the fact losers who drink Miller High Life can't afford to get out of the pool hall and make something of themselves. AdFreak Need a new reason to cry at weddings? Tosando, a Japanese company that offers musical instruments and lessons, is pleased to oblige with this intense, time-tripping tear-jerker. The short film tells the story of a widowed, middle-aged father and his daughter on her wedding day. At the reception, dad sits at the piano and attempts to play Pachelbel's Canon, which opens the floodgates for memories both happy and sad. The flashbacks are a tad disorienting at first, but you'll get the gist. (RocketNews24 has a handy breakdown/translation for those in need.)

Anita Sarkeesian’s TED talk and the predictable response » Lousy Canuck This talk by Anita Sarkeesian at the TEDxWomen 2012 event was posted with its ratings and comments disabled. While ordinarily I would consider that the mark of an attempt to stifle debate, this was done because she is the target of an ongoing hate campaign because she’s a woman talking about sexism in a traditionally male-dominated territory: video games. The comments and downvotes would wreck this talk’s chances of being seen, normally. In this case, knowing that she’d be censored by the same haters she’s talking about, I’m okay with disabling the ratings and comments.

Creativebrief - New Work Here you can find the latest work that has only just gone live. Stay in touch with what's happening in the market day-to-day - which brands are producing the most interesting work and which agencies are doing this with them. Wiltshire Farm Foods (Apetito) A feminist critique of “cisgender” « Liberation Collective Consistent with common usage of the term “cisgender,” the graphic below explains that “…if you identify with the gender you were assigened [sic] at birth, you are cis.” Another Trans 101: Cisgender webpage describes cis this way: “For example, if a doctor said “it’s a boy!” when you were born, and you identify as a man, then you could be described as cisgender.” [i] Likewise, girl-born people who identify as women are also considered cisgender. WBW are cis.

Creativity Online Connect: . . . Not logged in. Login Now? | Submit Work | Activate Account | Sign up for newsletters | Subscribe | iPad App | Help Advanced Search “Cultural scavengers”: Violentacrez, Reddit, and trolls Trigger warning: sexual violence and rape culture, racism, misogyny, online harassment, suicide. Everyone is buzzing about Adrian Chen’s article for Gawker unmasking the identity of Michael Brutsch, better known as Violentacrez, a superuser who contributed to and moderated several of the most creepy, racist, and misogynist forums on Reddit. With reason: it’s a well-written and impressive piece of investigative journalism, and does important work unmasking someone who’s done a huge amount of harm – and the broader user and company culture at Reddit that allowed him to get away with it for so long.

Social Media - AgencySpy Each year, 300,000 women die from pregnancy-related complications or unsafe abortions. To bring this statistic to life, production company B-Reel conceived and created “Names Not Numbers” for ad agency BETC Paris and Médecins du Monde (Doctors of the World), “a new experiential installation and digital experience” giving names to the women in the faceless statistic. On International Women’s Day, March 8th, on a public street in Paris’ 3rd distict, B-Reel and BETC Paris unveiled their “Machine of Death” — “an artfully constructed and coldly methodical device that, each minute, cursively prints the given name of an actual woman who has died in childbirth or during an unsafe abortion.”

Can you raise breast cancer awareness without even showing women?  #Pinkverts Posted by Tom Megginson | 9-10-2012 20:19 | Category: Pinkverts [Image via Saudi Women to Drive Facebook page] Åsk, at Adland, made me aware of this breast cancer month poster from Saudi Arabia. Hot on the heels of IKEA’s PR disaster last week, when it was found that all women had been Photoshopped out of its Saudi catalogue, this campaign has emerged from the murk of the internet.

FMBX News - Field Marketing & Brand Experience Have an account? login. Don't have an account? Create an account for free for unrestricted access. [GUEST POST] The Omniscient Breasts by Kate Elliot Kate Elliott is the author of the Spiritwalker Trilogy (Cold Magic, Cold Fire, and the forthcoming Cold Steel), the Crossroads Trilogy, the Crown of Stars septology, and the Novels of the Jaran. She lives in Hawaii. Thanks to Charles Tan for advice on this post. The Omniscient Breasts: The Male Gaze Through Female Eyes My reading experience of fantasy & science fiction over forty years is that it is mostly written with the male gaze.

still here by Cristy C, who still has a terrific sense of humor content notes for rape, violence and foul language “And guess what, knuckleheads? I’ve already been raped. AND I’M STILL FUCKING HERE.