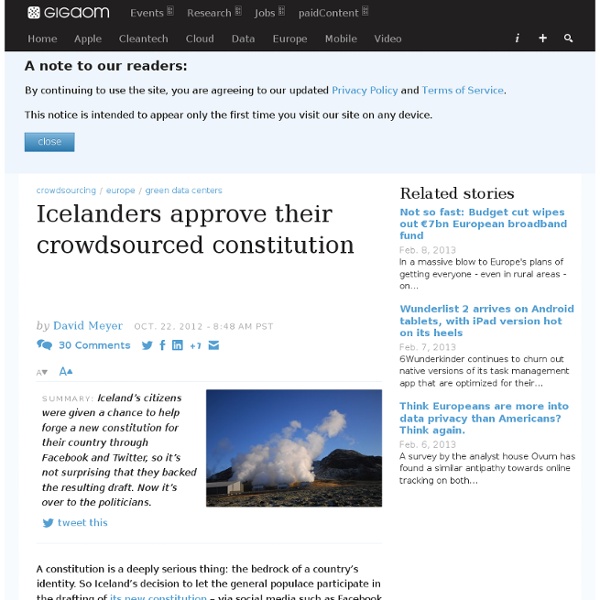 Crowdsourcing Crowdsourcing is a sourcing model in which individuals or organizations obtain goods and services. These services include ideas and finances, from a large, relatively open and often rapidly-evolving group of internet users; it divides work between participants to achieve a cumulative result. The word crowdsourcing itself is a portmanteau of crowd and outsourcing, and was coined in 2005.[1][2][3][4] As a mode of sourcing, crowdsourcing existed prior to the digital age (i.e. "offline").[5] There are major differences between crowdsourcing and outsourcing. Some forms of crowdsourcing, such as in "idea competitions" or "innovation contests" provide ways for organizations to learn beyond the "base of minds" provided by their employees (e.g. Definitions[edit] The term "crowdsourcing" was coined in 2005 by Jeff Howe and Mark Robinson, editors at Wired, to describe how businesses were using the Internet to "outsource work to the crowd",[1] which quickly led to the portmanteau "crowdsourcing."

Brazil looks to break from US-centric Internet (Update 2) Brazil plans to divorce itself from the U.S.-centric Internet over Washington's widespread online spying, a move that many experts fear will be a potentially dangerous first step toward fracturing a global network built with minimal interference by governments. President Dilma Rousseff ordered a series of measures aimed at greater Brazilian online independence and security following revelations that the U.S. The leader is so angered by the espionage that on Tuesday she postponed next month's scheduled trip to Washington, where she was to be honored with a state dinner. Internet security and policy experts say the Brazilian government's reaction to information leaked by former NSA contractor Edward Snowden is understandable, but warn it could set the Internet on a course of Balkanization. While Brazil isn't proposing to bar its citizens from U.S. Rousseff says she intends to push for international rules on privacy and security in hardware and software during the U.N.

Why 2012 was the best year ever Never in the history of the world has there been less hunger, less disease and more prosperity Has national morale ever been as strong as it was during the Jubilee and the Olympics? Photo: Getty Images. The below is from The Spectator, the best-written and most entertaining magazine in the English language. To read the whole magazine on iPad/iPhone, click here for a free trial. Or click here for a Kindle free trial. It may not feel like it, but 2012 has been the greatest year in the history of the world. To listen to politicians is to be given the opposite impression — of a dangerous, cruel world where things are bad and getting worse. Take global poverty. The doom-mongers will tell you that we cannot sustain worldwide economic growth without ruining our environment. And what about the concerns that the oil would run out? Advances in medicine and technology mean that people across the world are living longer. Nature can still wreak havoc.

- Iceland let the general populace participate Microwork Microwork is a series of small tasks which together comprise a large unified project, and are completed by many people over the Internet. [1] [2] Microwork is considered the smallest unit of work in a virtual assembly line. [3] It is most often used to describe tasks for which no efficient algorithm has been devised, and require human intelligence to complete reliably. The term was developed in 2008 by Leila Chirayath Janah of Samasource. [4] [5] Microtasking[edit] Microtasking is the process of splitting a job into its component microwork and distributing this work over the Internet. Since the inception of microwork, many online services have been developed that specialize in different types of microtasking. Good candidates for microtasks have the following characteristics: they are large volume tasks, they can be broken down into tasks that are done independently, and they require human judgement.[6] Services[edit] Uses[edit] Advantages[edit] Disadvantages[edit] See also[edit]

Protests follow Google 'endorsed advert' change 14 October 2013Last updated at 06:35 ET The change might mean comments made on Google turn up on adverts Google is facing a backlash over plans to put people's faces and comments about products and places into adverts. The "shared endorsements" policy change starts on 11 November and covers the comments, "follows" and other actions people do on Google+. One protest involves people swapping their profile pictures for that of Google boss Eric Schmidt so his image rather than their own appears on ads. Google said it had made it easy for people to opt out of the system. The search giant started alerting people about the upcoming policy change via banners on its main webpage and in a page explaining the change to its "policies and principles". Google also gave examples of how the "shared endorsement" system might work. Many people protested about the change to Google, and some altered their image profiles on the Google+ social network in response.

What If the 21st Century Begins in 2014? As if you didn’t already have enough to be nervous about, here’s something creepy to ponder as the new year opens. This what-if isn’t technological, social, political or even science-fictional. Rather, it’s a bit of wholly unscientific, superstitious pattern-recognition. The last two centuries (and possibly more) didn’t “start” at their official point, the turning of a calendar from 00 to 01. That wasn’t when they began in essence, nor when they first bent the arc of history. No. Think about it. Consider the world of 1913, when regular middle-class folks in the U.S., U.K., France, Germany and so on were acquiring unexpected wonders: clothes-washing machines, gas stoves, gas and then electric lighting, indoor plumbing, refrigeration, vaccinations, telephones, radios, motor cars. Science was pouring forth what seemed unalloyed goodness. Think our era is similarly fast-changing? Yes, all of those techno-advances continued after World War I. All right, that’s just one data point. If only.

Mac Rumors: Apple Mac iOS Rumors and News You Care About In the ongoing Samsung vs. Apple lawsuit, two experts hired by Apple took the stand on Tuesday to explain to the jury why Samsung deserves to pay $2 billion in damages for infringing on Apple's patents. First up was John Hauser, a professor of marketing at the MIT Sloan School of Management, who argued (via CNET) that the specific features patented by Apple, such as slide to unlock, made Samsung's devices far more appealing to consumers. To reach that conclusion, Hauser surveyed 966 Samsung device users (507 phone owners and 459 tablet owners) to measure the percentage of consumers who would buy devices with specific features, including universal search, background syncing, quick links, automatic word correction, and slide-to-unlock, among others. Those metrics were then used to determine how much people would pay for the Apple-patented features that Samsung included in its devices, with Hauser coming to the conclusion that customers would shell out $32 to $102 for each feature.

Stack Overflow WikiLeaks International non-profit organization publishing secret information, news leaks, and classified media WikiLeaks has drawn criticism for its alleged absence of whistleblowing on or criticism of Russia, and for criticising the Panama Papers' exposé of businesses and individuals with offshore bank accounts.[41][42] The organization has additionally been criticised for inadequately curating its content and violating the personal privacy of individuals. WikiLeaks has, for instance, revealed Social Security numbers, medical information, credit card numbers and details of suicide attempts.[43][44][45][46] History Staff, name and founding Julian Assange was one of the early members of the WikiLeaks staff and is credited as the website's founder. On 26 September 2018, it was announced that Julian Assange had appointed Kristinn Hrafnsson as editor-in-chief of WikiLeaks while the organisation's statement said Assange was remaining as its publisher. Purpose Administration Legal status Financing Leaks