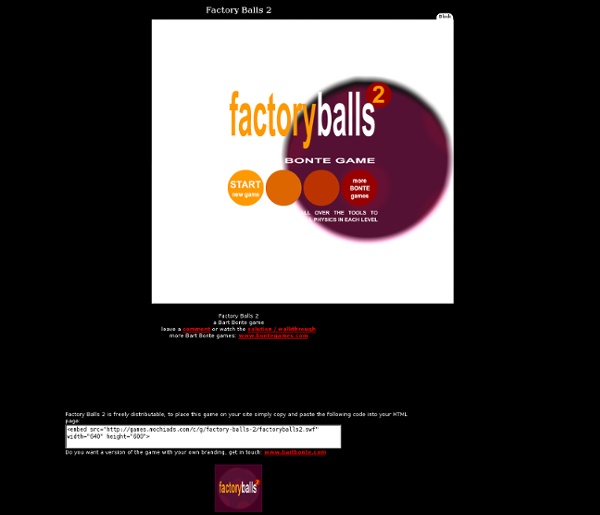 Five games that make you think about life Do you ever get that feeling, when playing games, that you really should be doing something more edifying with your life. I do, usually at about three in the morning after a marathon session of slaughtering undead in Sacred 2. It is a sad fact that most the computer games I play are about as intellectually stimulating as a fart. 1Passage It is very rare - nay, impossible - for a game to reduce me to tears. Passage can be played on Mac OSX, Windows and Linux and can be downloaded here. 2The Majesty of Colors "Last night I had a dream". The Majesty of Colors is a game that can be played multiple times - the decisions you make during the game determine between the many different endings. 3The Game The Game starts by telling us that there are no rules, just play. Trust me, The Game will change your perception of what games are about. 4Gray Gray is a riot - quite literally. Super Karoshi In Super Karoshi, dieing is not something to be scared of but celebrated. 5Super Karoshi

playr.co.uk - Zilch A dice game of skill and luck. Roll the dice, take the points or take a chance, it's up to you! Instructions Roll the dice to take your turn. If you roll some scoring dice then you must take some of those points before you can roll again. Once you have taken 300 points or more you can bank them or carry on rolling. The game ends when one player has banked more than 10000 points. Controls Use the mouse to click on the roll buttons, dice and scoring options. 1/2/3/4/5/6 = Click on the first/second/third/etc dice A/S/D = Click on the first/second/third score option R = roll the dice (on your turn) B = bank your points (on your turn) Enter = Close the tutorial window (if open) Game won't load?

9 Mindfulness Rituals to Make Your Day Better | zen habits “Smile, breathe and go slowly.” - Thich Nhat Hanh, Zen Buddhist monk Post written by Leo Babauta. Are you simply moving through your day, without fully living? I did this for many years. It was as if life were just passing by, and I was waiting for something to happen. But today isn’t preparation for tomorrow. Fully live today by being mindful. You don’t need to do all of these, but give a few of them a try to see if they make your day better. Mindfulness Rituals Ritual isn’t about doing a routine mindlessly. Here are a few of my favorites: 1. 2. 3. 4. 5. 6. 7. 8. 9. These rituals aren’t the only time you should be mindful, but they’re great reminders. Fancy Pants Adventures - a Free Flash Game as part of Flash Net

Ten games that make you think about life At the start of this year, we decided to come up with a list of Flash casual games with a philosophical bent. To be honest, we struggled. After days of research, we could only find a handful of games that had the thought-provoking depth we were looking for. Our list (which you can view by clicking here) was therefore only five games long. Fast forward to now, and it is remarkable how much difference a few months can make. Thanks to the work of pioneers like Daniel Benmergui, Gregory Weir and PixelAnte, there is now an abundance of clever arty Flash games to pique our intellects, and as a result creating this follow-up list of games that make you think has been a doddle. In a wonderful twist, it seems it is the Flash gaming space - until now known more for the throwaway nature of its games rather than depth - that is leading the way in this exciting new area of gaming, as we hope the following games prove. 1Immortall The game starts with you crash landing on a planet. 2Loved 5Coma 6Loondon

Games tagged with &#039;physics&#039; - Jay is Games Join your favorite oranges you wouldn't want to eat into a tropical pirate adventure. In this physics puzzler favorite, you've again got to figure out how to tuck the fruit away from exceptionally sharp rain drops by dropping and exploding various objects around each level. Use your webs to swing through a gorgeous subterranean world in this clever puzzle platformer. Though a few of the puzzles are quite tricky, the game is forgiving and has many checkpoints. When Dave's new construction co-workers strand him on the top floor of an unfinished building, he finds himself in familiar, physics-bending, puzzle-platforming territory. I feel the need... the need for speed... and smashing! So, don't ask too many questions, but someone needs an eye and we're going to get it to them. Color Instinct is an uncomplicated, but highly interesting physics puzzle which lets you play with colourful bouncy balls (whee!). Who you gonna call? I want candy! Got patience AND reflexes? Holy sheep!

Manhattan Map, New York City Map - NYC Map by NYCTourist.com, your Official source for New York City and Manhattan information *Terms & Conditions: Offers, promotions and rates subject to change and may vary based upon date, length of stay and other factors. Some offers do not include taxes and fees. All offers based on availability and are subject to change without notice. Uptown Manhattan Neighborhoods Guide Harlem: Originally a Dutch village, Harlem was established in 1658 and annexed to New York City in 1873. Since the early 20th century, the neighborhood has been a significant African-American residential, cultural, and business hub, with a peak black population of 98.2%. Morningside Heights: Bounded by Morningside Park to the east, Harlem to the north, and Riverside Park to the west, Morningside Heights is a thriving "college town" in New York City. Upper West Side: With an established reputation as the home of New York City's artistic luminaries, the Upper West Side is an upscale, mostly residential neighborhood between the Hudson River and Central Park. Midtown Manhattan Neighborhoods Guide