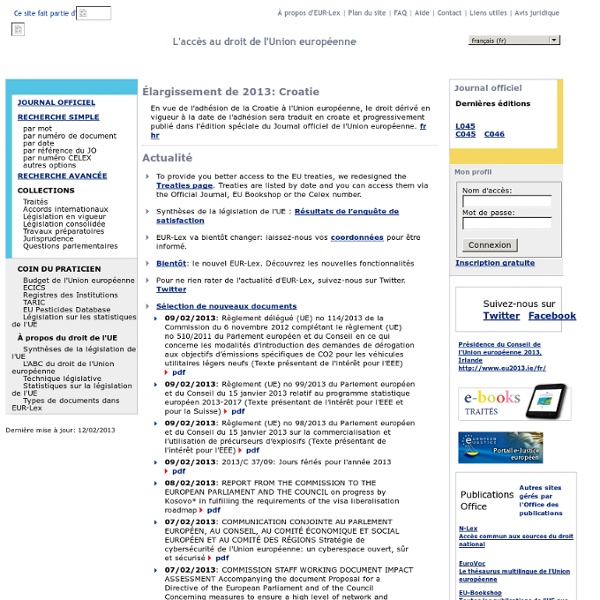 Terminology Extraction Introduction Terminology is the sum of the terms which identify a specific topic. Extracting terminology is the process of extracting terminology from a text. The idea is to compare the frequency of words in a given document with their frequency in the language. Personal Care - Good looking forward As a specialist in ingredients and concepts for effective skin, hair and body care products, Evonik Personal Care combines scientific excellence with passion. That means we always work according to the highest ethical and scientific principles – and we always put our hearts into our work. We call our approach: The Soul & Science of Beauty. It includes three aspects: foresight, responsibility and realization. TEGO® Solve 61 – Our new naturally derived solubilizer for lipophilic & natural oils. TEGO® Solve 61 is a high performance PEG-free solubilizer developed for the incorporation of lipophilic components into water-based formulations.

PARLEMENT EUROPEEN - Réponse à question E-005065-15 Toxicity of food products on the European market Approximately 3% of the food products on the European market have been found to contain pesticides in an amount that exceeds the legal limit, and in half of those cases, even when measurement uncertainties were taken into account, the amount recorded was much higher than that permitted. These statistics are among the findings of the 2013 annual report on pesticide residues in food recently published by the European Food Safety Authority (EFSA), which, over the course of that year, tested 81 000 food samples taken from 27 EU Member States. Even though the percentage of samples found to exceed the legal limits has fallen compared to 2010 (when the same tests were conducted), the findings are still not at all reassuring for consumers, who remain at risk from short-term food poisoning.

About Oat Ingredients, llc is the exclusive US Distributor of OatWell® natural ingredients, now being offered by CreaNutrition®-Swedish Oat Fiber to the North American market. CreaNutrition - Swedish Oat Fiber (SOF) The Nordic climate and long hours of daylight during the harvest season provide an optimal environment for all natural, non-GMO and high quality oats of Scandinavia.

PARLEMENT EUROPEEN - Réponse à question E-007889-16 Notifying national agencies of shipments of animal origin, unprocessed vegetables and unprocessed fruits Legislation has recently been passed in Wales that requires all shops and businesses serving or selling food to display, at the entrance, a certificate of inspection by the local authorities regarding food hygiene and environmental health. Hygiene inspections for businesses that handle foods were introduced in Great Britain in November 2010 and entrusted to local authorities, in collaboration with the Food Standards Agency, which publishes all inspection results on its website, including those relating to businesses that decide not to display their results to the public. Until a few days ago, displaying this certificate was voluntary throughout the whole of Great Britain. This has now been made compulsory, but only in Wales.

100 days of web mining In this experiment, we collected Google News stories at regular 1-hour intervals between November 22, 2010, and March 8, 2011, resulting in a set of 6,405 news stories. We grouped these per day and then determined the top daily keywords using tf-idf, a measurement of a word's uniqueness or importance. For example: if the word news is mentioned every day, it is not particularly unique at any single given day. In-Cosmetics 2012: Genomics, Holistic Approaches and Old Favorites With a Twist BARCELONA—Personal care was taken very personally at in-cosmetics in Barcelona, April 17–19, 2012, as ingredient developers took R&D to a painstaking level of detail: the genome. While the study of gene expression is by no means new, and the concept of epigenomics has previously emerged at conferences and in research at universities and large manufacturers, it has materialized in the mainstream as the basis for many new cosmetic active launches. In fact, during the event, the editors of Cosmetics & Toiletries interviewed several attendees who noted the highly advanced methods being used by raw material suppliers. However, the specificity of such techniques does not necessarily limit one to the development of one active for one function.

PARLEMENT EUROPEEN - Réponse à question E-008709-16 Dual-quality foodstuffs Recent press reports have again brought to light the issue of dual-quality foodstuffs, whereby foods sold in identical or similar packaging vary in their composition depending on where they are sold. Brand-name foodstuffs have been found to contain different ingredients in different Member States. Foods which consumers may assume to be identical can vary in composition and in the quality of their ingredients(1). There is a concern that consumers are being misled when brand-name foodstuffs, packaged by global brands using internationally recognised logos, vary in content and quality.