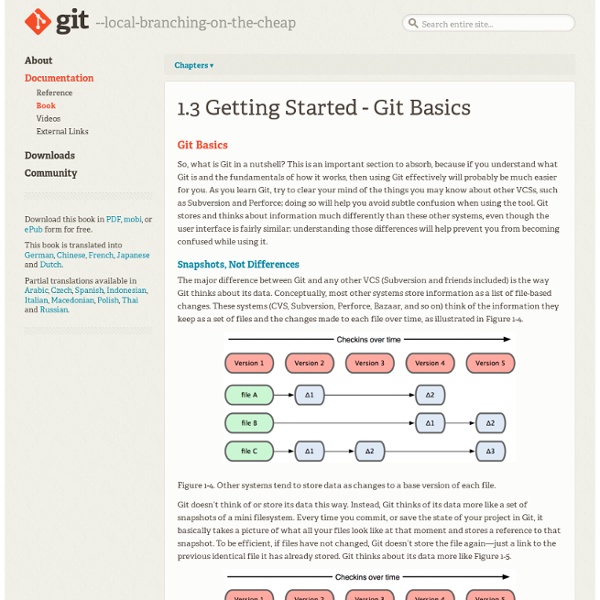 So, what is Git in a nutshell? This is an important section to absorb, because if you understand what Git is and the fundamentals of how it works, then using Git effectively will probably be much easier for you. As you learn Git, try to clear your mind of the things you may know about other VCSs, such as Subversion and Perforce; doing so will help you avoid subtle confusion when using the tool. Snapshots, Not Differences The major difference between Git and any other VCS (Subversion and friends included) is the way Git thinks about its data. Figure 1-4. Git doesn’t think of or store its data this way. Figure 1-5. This is an important distinction between Git and nearly all other VCSs. Nearly Every Operation Is Local Most operations in Git only need local files and resources to operate — generally no information is needed from another computer on your network. This also means that there is very little you can’t do if you’re offline or off VPN. Git Has Integrity Git Generally Only Adds Data Related:  git

Qualquer objeto se torna sensível ao toque com Touché Interfaces “touch” estão em vários lugares: smartphones, caixas eletrônicos, tablets, totens interativos. Mas se depender da Disney Research e da nova tecnologia apresentada por eles há alguns dias, qualquer objeto pode se tornar sensível ao toque. Inclusive líquidos. (!) Confira no vídeo abaixo como funciona a tecnologia: What a Branch Is To really understand the way Git does branching, we need to take a step back and examine how Git stores its data. As you may remember from Chapter 1, Git doesn’t store data as a series of changesets or deltas, but instead as a series of snapshots. When you commit in Git, Git stores a commit object that contains a pointer to the snapshot of the content you staged, the author and message metadata, and zero or more pointers to the commit or commits that were the direct parents of this commit: zero parents for the first commit, one parent for a normal commit, and multiple parents for a commit that results from a merge of two or more branches. To visualize this, let’s assume that you have a directory containing three files, and you stage them all and commit. $ git add README test.rb LICENSE $ git commit -m 'initial commit of my project' Running git commit checksums all project directories and stores them as tree objects in the Git repository. Figure 3-1. Figure 3-2. Figure 3-3. Figure 3-4.

The Git Parable Git is a simple, but extremely powerful system. Most people try to teach Git by demonstrating a few dozen commands and then yelling “tadaaaaa.” I believe this method is flawed. Such a treatment may leave you with the ability to use Git to perform simple tasks, but the Git commands will still feel like magical incantations. Doing anything out of the ordinary will be terrifying. The following parable will take you on a journey through the creation of a Git-like system from the ground up. The Parable Imagine that you have a computer that has nothing on it but a text editor and a few file system commands. Snapshots Alfred is a friend of yours that works down at the mall as a photographer in one of those “Special Moments” photo boutiques. Like some sort of formulaic plot device, Alfred’s innocent statement acts as a catalyst for you to see the ideal solution to your version control dilemma. You start your project in a directory named working. Branches Branch Names Distributed Offline Merges Diffs

Git tortoisegit - Where are git database files stored on windows Explain Git with D3 We are going to skip instructing you on how to add your files for commit in this explanation. Let's assume you already know how to do that. If you don't, go read some other tutorials. Pretend that you already have your files staged for commit and enter git commit as many times as you like in the terminal box. git branch name will create a new branch named "name". Branches can be deleted using the command git branch -d name. Type git commit and git branch commands to your hearts desire until you understand this concept. git checkout has many uses, but the main one is to switch between branches. In addition to checking out branches, you can also checkout individual commits. Type git commit, git branch, and git checkout commands to your hearts desire until you understand this concept. You can combine git branch and git checkout into a single command by typing git checkout -b branchname. This command is normally used with one of three flags: "--soft", "--mixed", and "--hard".

Learning · Normal Workflow Make and view changes made, then stage and commit them. So you have a Git repository and everything is all setup. What now? Generally, it is not going to be much different than working with any other source control system. The only real difference should be the staging process. modify files see what you’ve changed stage the changes you want to commit commit your staged changes rinse, repeat That is the most complex case. modify files commit your changes repeat Easy peasy. the simple case The first thing we’re going to do is modify some files. $ git clone $ cd simplegit For this first example we’ll modify the README file to add ourselves as an author on the project. First, we simply edit the file. A prompt for a commit message will open in our editor (the $EDITOR environment variable or ‘core.editor’ git config variable - by default it uses ‘vim’) that looks like this: _ # Please enter the commit message for your changes. using the staging area

Git vs Mercurial: Why Git? - Atlassian Blogs This is a guest blog post by Charles O’Farrell, a developer at Atlassian, that will focus on the reasons a team may choose Git as their DVCS of choice. Charles is focused on coding in any DVCS and has spent some time switching users over from ClearCase to Git. In our previous blog we explored why teams may choose Mercurial as their distributed version control system of choice. Now let’s explore why Git is a strong option as your distributed version control system (DVCS). Since the dawn of time (1970), geeks have fought a long and bloody war between right and wrong; good and evil; Vim and Emacs. This article takes the *cough*winning*cough* side of Git and looks at some of the compelling reasons why it may have risen to dominance in this epic struggle. Caveats *yawn* Firstly, let me be upfront and admit that I would be the last person to claim Git is perfect. With that said, I originally started my DVCS life with Mercurial, but later switched to Git and never looked back. Why is that? Right!

Git Reference A successful Git branching model » nvie.com In this post I present the development model that I’ve introduced for some of my projects (both at work and private) about a year ago, and which has turned out to be very successful. I’ve been meaning to write about it for a while now, but I’ve never really found the time to do so thoroughly, until now. I won’t talk about any of the projects’ details, merely about the branching strategy and release management. Why git? ¶ For a thorough discussion on the pros and cons of Git compared to centralized source code control systems, see the web. But with Git, these actions are extremely cheap and simple, and they are considered one of the core parts of your daily workflow, really. As a consequence of its simplicity and repetitive nature, branching and merging are no longer something to be afraid of. Enough about the tools, let’s head onto the development model. Decentralized but centralized ¶ Each developer pulls and pushes to origin. The main branches ¶ masterdevelop Supporting branches ¶ develop

Setting up Git in PowerShell It seems like everybody is using git these days. And for most, not everybody is stuck using Windows in their day to day workflow. Unfortunately, I am. The goal of this post is to work through these steps as best I can to get users up and running as quickly as possible and as easily as possible, reducing the amount of confusion and fumbling around with settings. First step – Download and install the git port for Windows. This is pretty straight forward. Second step – Add the git binaries to your system path variable. This is the most important step, because out of the box git won’t work in your ordinary PowerShell command prompt, it needs to be opened separately. Computer -> Properties -> Advanced -> Environmental Variables and add the following value to the PATH variable. C:\Program Files\Git\bin Here is what this should look like in Windows. Third step (optional) – Download and install posh-git for better PowerShell and git integration. install-module posh-git That should be it.

First-Time Git Setup Now that you have Git on your system, you’ll want to do a few things to customize your Git environment. You should have to do these things only once; they’ll stick around between upgrades. You can also change them at any time by running through the commands again. Git comes with a tool called git config that lets you get and set configuration variables that control all aspects of how Git looks and operates. These variables can be stored in three different places: /etc/gitconfig file: Contains values for every user on the system and all their repositories. On Windows systems, Git looks for the .gitconfig file in the $HOME directory (%USERPROFILE% in Windows’ environment), which is C:\Documents and Settings\$USER or C:\Users\$USER for most people, depending on version ($USER is %USERNAME% in Windows’ environment). Your Identity The first thing you should do when you install Git is to set your user name and e-mail address. Your Editor $ git config --global core.editor emacs Your Diff Tool