Liferay: Put people at the heart of your business 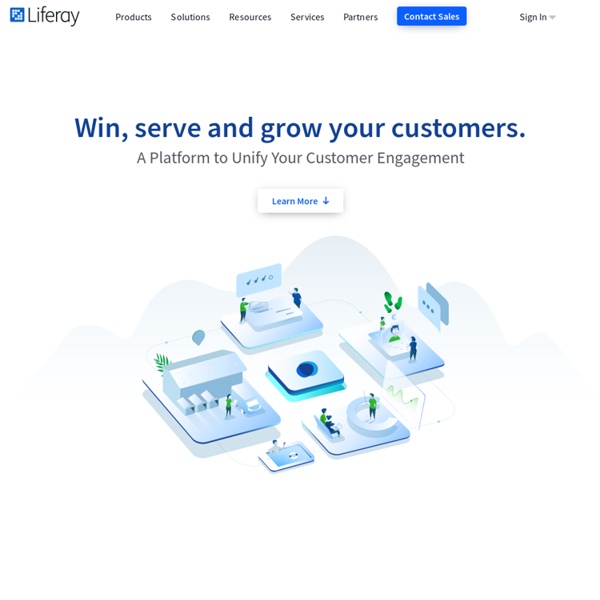 The Interactive Activation and Competition Network: How Neural Networks Process Information Copyright © Simon Dennis, 1997. * These sections contain some mathematics which can be omitted on a first reading if desired. Introduction The Interactive Activation and Competition network (IAC, McClelland 1981; McClelland & Rumelhart 1981; Rumelhart & McClelland 1982) embodies many of the properties that make neural networks useful information processing models.

Welcome to the Virtual Crash Course in Design Thinking Welcome to the d.school’s Virtual Crash Course resource page! We know not everyone can make a trip to the d.school to experience how we teach design thinking. So, we created this online version of one of our most frequently sought after learning tools. 20 Useful Free PDF ebooks for Designers and Bloggers Over the years I have a saved a decent sized library of useful design and blogging related PDF ebooks, I love them. I have voraciously collected them, and all stored on my mobile for whenever the chance of quick read arises. In this post I would like to share my favorite 20 (freely available) ebooks with you. All of the below books are have been written to be read quickly, they are neither very long nor are they the definitive resource on their specific subject.

Grails (Framework) Grails was previously known as 'Groovy on Rails'; in March 2006 that name was dropped in response to a request by David Heinemeier Hansson, founder of the Ruby on Rails framework.[1] Work began in July 2005, with the 0.1 release on March 29, 2006 and the 1.0 release announced on February 18, 2008. G2One - The Groovy Grails Company - was acquired by SpringSource in November, 2008,[2] and it was later acquired by VMware.[3] Grails was developed to address a number of goals: Grails has three properties that differentiate it from traditional Java web frameworks: No XML configurationReady-to-use development environmentFunctionality available through mixins Creating web applications in Java traditionally involves configuring environments and frameworks at the start and during development.

A New Cluster Based Fuzzy Model Tree for Data Modeling This paper proposes a fuzzy model tree, so-called c-fuzzy model tree, consisting of local linear models using fuzzy cluster for data modeling. Cluster centers are calculated by fuzzy clustering method using all input and output attributes. And then, linear models are constructed at internal nodes with fuzzy membership grades between centers and input attributes. The expansion of internal node is determined by comparing the error calculated at the parent node with the sum of ones at the child nodes. On the other hand, data prediction is performed with the linear model having the highest fuzzy membership value between input attributes and cluster centers at the leaf nodes.

Design Thinking About this course Welcome to the Macromedia University Design Thinking MOOC. The first Macromedia University MOOC Design Thinking is about understanding and implementing the methodology of Design Thinking. An Introduction To Cassandra: The Data Model I'm fairly new to the whole NoSQL game, and one thing I keep hearing is how great Cassandra is. Built by Facebook and open sourced in 2008, Cassandra is probably the most popular NoSQL implementation: "A massively scalable, decentralized, structured data store". Cassandra takes it's distribution features from Dynamo and the data model from BigTable. Before we look at using Cassandra, we first need to understand the data model. For developers new to Cassandra, coming from a relational database background, the data model can be a bit confusing.

Hibernate EHCache Second Level Caching Example Tutorial One of the major benefit of using Hibernate in large application is it’s support for caching, hence reducing database queries and better performance. In earlier example, we looked into the Hibernate First Level Cache and today we will look into Hibernate Second Level Cache using Hibernate EHCache implementation. Hibernate Second Level cache providers include EHCache and Infinispan, but EHCache is more popular and we will use it for our example project. However before we move to our project, we should know different strategies for caching an object. Read Only: This caching strategy should be used for persistent objects that will always read but never updated. It’s good for reading and caching application configuration and other static data that are never updated.

The Fundamentals of Change Management Posted on 02/16/2012 at 08:00 am “It is not the strongest species that survive, nor the most intelligent,it is the one most adaptable to change” -Charles Darwin Today’s business environment is defined by change, whether it is a shift in leadership, modified customer requirements, new legislation or stiffer competition, organizations are continuously adapting and reinventing themselves to stay viable. Flexibility and agility are no longer nice to have, they are strategic imperatives. The ability to maintain continuity with fewer resources and greater demands while integrating change, literally defines which organizations succeed, thrive and survive. What is change management and why is it important?

JCS – Java Caching System Java Caching System JCS is a distributed caching system written in Java. It is intended to speed up applications by providing a means to manage cached data of various dynamic natures. Like any caching system, JCS is most useful for high read, low put applications. Latency times drop sharply and bottlenecks move away from the database in an effectively cached system. Learn how to start using JCS. Kotter's 8-Step Change Model - Change Management Skills from MindTools.com Implementing Change Powerfully and Successfully Learn how to implement change powerfully and successfully Change is the only constant. – Heraclitus, Greek philosopher