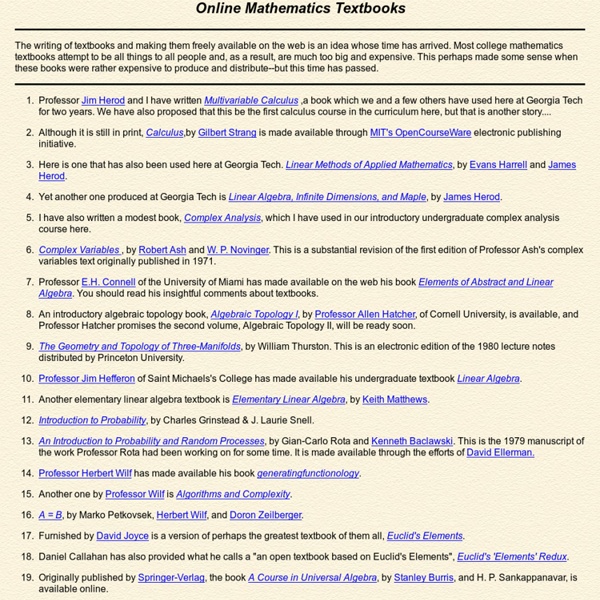 Professor Jim Herod and I have written Multivariable Calculus ,a book which we and a few others have used here at Georgia Tech for two years. We have also proposed that this be the first calculus course in the curriculum here, but that is another story.... Although it is still in print, Calculus,by Gilbert Strang is made available through MIT's OpenCourseWare electronic publishing initiative. Here is one that has also been used here at Georgia Tech. Linear Methods of Applied Mathematics, by Evans Harrell and James Herod. Yet another one produced at Georgia Tech is Linear Algebra, Infinite Dimensions, and Maple, by James Herod.

The Simpsons' secret formula: it's written by maths geeks Without doubt, the most mathematically sophisticated television show in the history of primetime broadcasting is The Simpsons. This is not a figment of my deranged mind, which admittedly is obsessed with both The Simpsons and mathematics, but rather it is a concrete claim backed up in a series of remarkable episodes. The first proper episode of the series in 1989 contained numerous mathematical references (including a joke about calculus), while the infamous "Treehouse of Horror VI" episode presents the most intense five minutes of mathematics ever broadcast to a mass audience. Moreover, The Simpsons has even offered viewers an obscure joke about Fermat's last theorem, the most notorious equation in the history of mathematics. These examples are just the tip of the iceberg, because the show's writing team includes several mathematical heavyweights. The 2006 episode "Marge and Homer Turn a Couple Play", for example, contains a triple dose of secret mathematics.

Math - Open SUNY Textbooks Math The following is a curated list of OER materials available in your particular subject area. The items you see here are generally well-developed, effectively structured, and are used and recommended by faculty in the SUNY system. This is by no means an exhaustive list of all the openly licensed material available. If you don’t see something you need, we’d love to hear from you. Free textbooks From WikiEducator A book shelf project. This is a starter page for the Free Textbooks group that came together during the iCommons Summit in Dubrovnik, Croatia in June 2007. The group's focus is on developing free textbooks (also by using public domain books and other other materials). The Geometry of 3-Manifolds Dr. Lisa Randall, a professor of theoretical physics at Harvard, introduces the lecture. McMullen graduated from Williams College, and went on to study at Cambridge University and the Institut des Hautes Etudes Scientifique in France.

Immersive Linear Algebra immersivemath immersive linear algebra by J. Ström, K. Bookshelves - Mathematics LibreTexts The Bookshelves area in this LibreTexts Library holds texts that are curated by the LibreTexts Development team and can be used either directly or as content for building customized remixes (i.e., texts that are generated from existing content often with customized editing and/or content interspersed) for use in campus Course Shells. There are two classes of texts found in the Bookshelves: "Textbooks" and "Textmaps". Textbooks are the central spot for integrated content into our library and are identified by "Book:" in their titles. Textmaps are specialized remixes that are constructed to follow the organization of existing commercial textbooks. Textmaps facilitate adoption by faculty that are unable to switch from a commercial textbook to an OER alternative; these texts are identified by "Map:" in their titles.

Global Text Project We maintain the chapters for all Global Text Project books in open document format with extensive use of style sheets so that we can quickly convert them into different media or formats. Global Text Project books have been internationalized and converted to a standard format using OpenOffice. You can access individual chapters in open document format and modify them to meet your needs. We control changes to the master version of each chapter, so please report corrections and suggestion changes to the Associate Editor. There are two ways to find books, by directory or by search.

Predicting the future of the past tense Verbs evolve and homogenize at a rate inversely proportional to their prevalence in the English language, according to a formula developed by MIT and Harvard University mathematicians who've invoked evolutionary principles to study our language over the past 1,200 years. The team, which reported their findings in the Oct. 11 issue of Nature, conceives of linguistic development as an essentially evolutionary scheme. Just as genes and organisms undergo natural selection, words--specifically, irregular verbs that do not take an "-ed" ending in the past tense--are subject to powerful pressure to "regularize" as the language develops. "We're really on the front lines of developing the mathematical tools to study evolutionary dynamics," says Jean-Baptiste Michel, a graduate student at Harvard Medical School.