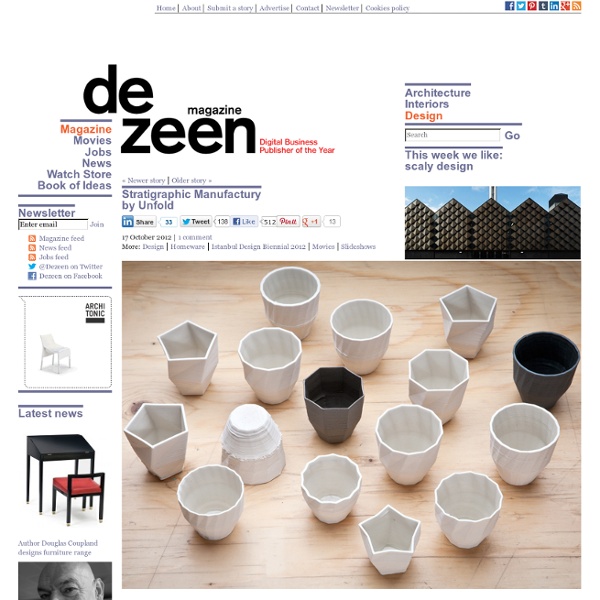 Joseph Grima on Adhocracy at Istanbul Design Biennial News: new technologies are causing a "cultural revolution" that will transform the way objects are made and the way they look, according to the curator of Adhocracy, a new exhibition exploring the impact of digital networks and open-source thinking on the design world (+ interview transcript). "It’s more than simply a technological revolution; it's a cultural revolution we’re undergoing now," said Domus magazine editor Joseph Grima, who curated the exhibition as part of the inaugural Istanbul Design Biennial, which opened this weekend: "And I think this is just the beginning." Rigid top-down systems established to optimise mass production in the last century are being replaced by flexible peer-to-peer networks, leading to new aesthetic codes and the destruction of the idea of the designer as author, Grima told Dezeen. He added: "It ultimately boils down to the emergence of the network as the productive model par excellence of our time. Marcus Fairs: What does Adhocracy mean?

3D-printed dress for Dita Von Teese New York designer Michael Schmidt and architect Francis Bitonti have created a 3D-printed dress for burlesque dancer Dita Von Teese. Images above and top by Albert Sanchez. Designed by Schmidt and generated by Bitonti, the floor-length nylon gown was made using selective laser sintering (SLS), where material is built up in layers from plastic powder fused together with a laser. The rigid plastic components are fully articulated to create a netted structure that allows for movement. Draped over a nude silk corset, the black-lacquered dress is cinched in at the waist and exaggerated at the shoulders, and embellished with 12,000 Swarovski crystals. It was unveiled during an event at the Ace Hotel in New York earlier this week, as part of a showcase of products organised by 3D printing marketplace Shapeways, who printed the dress and were also behind the 3D-printed bikini we showed a couple of years ago. Photos are by Jeff Meltz unless otherwise stated. Mr.

Road-ready 3D-printed car on the way News: a fuel-efficient 3D-printed car is set to hit the road in two years, according to its US-based manufacturer RedEye On Demand. The three-wheeled, two-passenger vehicle comprises 40 large 3D-printed thermoplastic parts, compared to the hundreds of parts found in a normal car. The URBEE 2 is being developed by RedEye On Demand and its parent company, 3D printer maker Stratasys, in collaboration with KOR EcoLogic. So far in its development, 3D printing has largely been used to produce unique or customisable items in single editions or small runs, but the arrival of the URBEE 2 suggests it could also be applied to mass production on a huge scale. "A future where 3D printers build cars may not be far off after all," said Jim Bartel, vice president of RedEye On Demand. Once it's road-ready, the designers plan to drive URBEE 2 from San Francisco to New York on just 45 litres (10 gallons) of biofuel such as ethanol. Here's the press releases from RedEye On Demand:

1% products by Nendo Milan 2012: Japanese designers Nendo will present new additions to their 1% products in Milan this April, including this tea set where the lids double as spinning tops. New pieces also include stacking vases, a coffee-filter holder that mimics the matching cup it stacks with and a stacking set of saki cups that can be combined to make a tumbler, large cup or jug. 100 of each design will be produced and sold. Critic Alice Rawsthorn's spoke to Oki Sato of Nendo about the collection in her interview with him here and you can watch our interview with him on Dezeen Screen here. The collection will be on show as part of Nendo's solo show at Palazzo Visconti, Via Cino del Duca 8, Milan from 17-22 April. Photographs are by Hiroshi Iwasaki. Here's some more information from Nendo: new collection of 1% products will be shown during the Milano Salone at nendo’s solo exhibition 100 is the perfect amount: they’re neither one-off “works of art” nor mass-produced products made in the millions. Win-tea cup

Open Source Architecture Manifesto at Istanbul Design Biennial Visitors to the Adhocracy show at the Istanbul Design Biennial are confronted with a plotter taking the text of the Open Source Architecture Manifesto from a Wikipedia page and writing it onto a wall. (+ slideshow) Created by Walter Nicolino and Carlo Ratti of Carlo Ratti Associati, the plotter updates the text as the Wikipedia page changes. The project began last year when Joseph Grima, editor of Domus magazine and curator of the Adhocracy show, asked Ratti to write a manifesto for open-source architecture. "I said yeah sure, but let’s do it in an open-source way," Ratti told Dezeen. "So we set up a page on Wikipedia." Ratti, who is director of the Senseable City Lab at MIT, invited contributors including Nicholas Negroponte, John Habraken, Paola Antonelli and Hans Ulrich Obrist to contribute to the page to create an evolving document that was published in Domus in June 2011. The plotter is based on similar principles to Hektor, a wall-mounted plotter that paints with a spray can.

ICFF becomes first major design fair placing 3D printing to the fore News: next month's International Contemporary Furniture Fair in New York will be the first major design fair to place 3D printing and digital fabrication at the core of its programme, with a four-day series of workshops introducing the hardware and software that could change the face of design, manufacturing and distribution (+ interview). DesignX, which takes place from 18 to 21 May alongside ICFF, will comprise 15 one and two-hour workshops on topics including 3D printing, online product customisation, parametric design and even 4D printing – the nascent technology of programming materials capable of self-assembly. "At [...] these trade shows, you typically have a very large audience who attend over multiple days," explains Ronnie Parsons, a 3D printing expert from New York studio Mode Collective, who will lead the event's 3D printing workshops with design partner Gil Akos. Attendees can sign up for any number of workshops individually, but must already be registered to attend ICFF.