Malala Yousafzai, Girl Shot by Taliban, Was Drawn to Politics by Dad 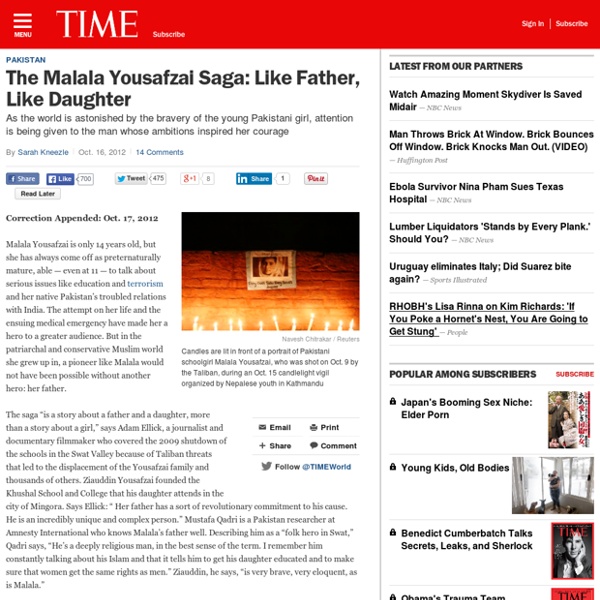 Correction Appended: Oct. 17, 2012 Malala Yousafzai is only 14 years old, but she has always come off as preternaturally mature, able — even at 11 — to talk about serious issues like education and terrorism and her native Pakistan’s troubled relations with India. The attempt on her life and the ensuing medical emergency have made her a hero to a greater audience. But in the patriarchal and conservative Muslim world she grew up in, a pioneer like Malala would not have been possible without another hero: her father. The saga “is a story about a father and a daughter, more than a story about a girl,” says Adam Ellick, a journalist and documentary filmmaker who covered the 2009 shutdown of the schools in the Swat Valley because of Taliban threats that led to the displacement of the Yousafzai family and thousands of others. Ziauddin Yousafzai founded the Khushal School and College that his daughter attends in the city of Mingora. (MORE: How Malala Yousafzai May Affect Pakistan’s Culture Wars)

Girl basketball players in Saudi Arabia need sneakers, a net, and courage JIDDAH, Saudi Arabia — In Saudi Arabia, there are many restrictions on what a woman can and cannot do. Now, a group of women and girls in the kingdom are pushing back by playing basketball. Women's basketball is becoming popular in the Middle East's largest country. Women are using basketball to push for greater rights on and off the courts in Saudi Arabia. "We are an activist team," said Lina Almaeena, who started the first women's basketball team here 11 years ago. Not Just A Sport For the players, basketball is not merely a sport. Women are forced to follow strict rules about what they can wear. Nevertheless, Saudi women's basketball is on the rise. "I wouldn't be the person I am today without the sport and the team," she said. Fun, Friendship, Teamwork At a recent afternoon basketball practice in Jiddah, girls as young as 4 years old jumped, took shots and ran on open-air basketball courts behind gated concrete walls. The sport has grown into a network of teams in different cities.

Because I am a Girl - Girls’ education Every girl has a right to an education, but close to 62 million girls around the world are not in school, and even more struggle to remain where they belong – in the classroom. Every day, girls are taken out of school, married far too young, and subjected to violence in school. And yet, it’s proven that with an education, girls can lift themselves – and everyone around them – out of poverty. The facts on education for girls For every extra year a girl stays in school, her income can increase by 15 to 25%There is a 20% increase in child survival when household income is in a mother’s handsIf 10% more girls attend school, a country’s GDP increases by an average of 3%When a girl receives more education, she is 6X less likely to be married as a child and will have 2.2 fewer, yet healthier children who are more likely to go to school themselvesEach extra year of a mother’s schooling cuts infant mortality by between 5 and 10% The facts are clear. So, what’s keeping girls from school?

New freedoms of Afghan women under threat KABUL, Afghanistan — Shahgol Shah was just 11 when her family married her to a man she didn't choose. She never went to school, and spent her life raising seven children. Today, Shah, who is 50, still obeys an Afghan custom that forbids women to leave home without a male relative. In public, she wears a burka, the long cloak covering her entire body worn by some Muslims for modesty. Her 26-year-old daughter, Ghazalan Koofi, lives a life her mother could never have imagined. Koofi demands the respect of her male co-workers. A Dangerous Time Koofi was a teenager when the United States invaded Afghanistan in 2011. But U.S. combat troops are leaving Afghanistan next year. “We are entering a very dangerous period for women,” says Koofi. Shukriya Matin also became an adult in a world of new freedoms. Matin, 26, was in grade school when her family ran from the Taliban in 1996. She returned to Kabul and earned a high school degree. Fear A Taliban Return Freedoms May Be Lost

Mo'ne Davis Has a Memoir Coming Next March NEW YORK (AP) — A memoir when you're still a teenager may seem premature, but not for Mo'ne Davis, the first female pitcher to win a Little League World Series game. "Mo'ne Davis: Remember My Name" will be released next March by HarperCollins Children's Books, the publisher told The Associated Press on Monday. The honor roll student from Philadelphia became a sensation last summer after leading the Taney Dragons to a 4-0 victory over Nashville, when she was just 13. Known for her long braids and uncommon poise, she has since appeared on the cover of Sports Illustrated, thrown out the first pitch at a major league World Series game and starred in a car commercial directed by Spike Lee. In September, she donated her jersey to the baseball Hall of Fame in Cooperstown. "When I joined an all-boys baseball team, my mom wasn't too happy," Mo'ne said in a statement issued Monday through HarperCollins. Financial terms for the book deal were not disclosed.

Ms. Lyon's ELA Blog Yesterday we watched some videos from Google and Flocabulary that showed examples of years in review. Below are the lyrics to the Flocabulary rap. They talk about a lot of different things that were in the news this past year. Read through the lyrics. As you do, think about which events you remember, and which events you want to know more about. When you get to the bottom of the lyrics, take the survey. From Flocabulary’s Year in Review 2014: It’s so crazy right now. Yeah, what do we have here? Word, now let’s switch gears, There’s a lot of other headlines from this year.The European Space Agency made history, When it landed on a comet to unlock the Earth’s mysteries. The world of sports is wild, no rodeo, Titles in SF, Seattle and San Antonio.Lebron came home to OHIO,Does Donald Sterling own the Clips? Take the survey:

Global Warming Effects Map - Effects of Global Warming Alex Lin - Turning E-Waste Into E-Treasure Alex Lin was a boy who was just reading the newspaper one day. He read an article about something called e-waste. He learned that it is the waste generated as people upgrade electronic devices. When people are done with things like computers, phones, mp3 players, etc. and throw them away, that’s e-waste. He also learned that e-waste is dangerous to the environment. Yet this was not something that was not widely known. To help stop e-waste, Alex got help from his community service group, the Westerly Innovations Network (WIN). Additional Resources: Here is an article about Alex and his efforts.Here is an interview with Alex.Click here for more InspireMyKids stories about the environment.Find great books in our store, like Acting for Nature, about how children can help the environment.This video is about recycling e-waste. Topics for Discussion: Think about all the electronics families have. Take Action: Teacher Features:

Effects Global climate change has already had observable effects on the environment. Glaciers have shrunk, ice on rivers and lakes is breaking up earlier, plant and animal ranges have shifted and trees are flowering sooner. Effects that scientists had predicted in the past would result from global climate change are now occurring: loss of sea ice, accelerated sea level rise and longer, more intense heat waves. Taken as a whole, the range of published evidence indicates that the net damage costs of climate change are likely to be significant and to increase over time. Scientists have high confidence that global temperatures will continue to rise for decades to come, largely due to greenhouse gases produced by human activities. The Intergovernmental Panel on Climate Change (IPCC), which includes more than 1,300 scientists from the United States and other countries, forecasts a temperature rise of 2.5 to 10 degrees Fahrenheit over the next century. Future effects Temperatures will continue to rise